By Cyndi Perkins
Share this story:
A quiet campus in May 2020 as the state’s stay-at-home order continued. It was anything but quiet behind the scenes as the campus community fulfilled a vital need for COVID-19 testing capacity in the region.

Heldt's participation in the Michigan Tech COVID-19 Testing Lab—an operation that would call on the strengths of the entire University research community—began in late March 2020 as the professor and chemical engineer, who specializes in vaccine development, sheltered in place with her family under the state's stay-at-home order. They were figuring out plans for the evening. "My big joke now is that I will never answer the phone again when my chair calls me at 7 p.m.," says Heldt, who also serves as the James and Lorna Mack Endowed Chair of Cellular and Molecular Engineering. Chemical engineering chair Pradeep Agrawal was relaying a message from electrical and computer engineering chair Glen Archer: Please call him. "I couldn't imagine why," she says.

Archer posed an extraordinary question. He'd been talking to State Rep. Greg Markkanen, who, along with other state legislators representing the Upper Peninsula, wanted to bring COVID-19 testing to the region. At the time, testing delays were common across the nation and tests themselves were in short supply in the UP and other remote and rural regions. "There wasn't capacity for the Upper Peninsula," says Heldt.

Could Michigan Tech provide it? That evening, Heldt began looking into what running the polymerase chain reaction (PCR) test used to detect the virus entailed. She knew the University had the PCR equipment on campus necessary for analyzing test samples of genetic material. Heldt also had the Biosafety Level 2 expertise required to process tests in accordance with safety guidelines. On a phone call with Vice President of Research David Reed the next day, she confirmed it: "We have PCR machines and we can do it safely." It was the start of an ongoing inquiry that would continue far longer than anyone anticipated.

"Our goal was to come up with questions and get answers," says Heldt. Ironically, she notes, pandemic protocols worked in Tech's favor. "Lockdown made it work. We were going to dedicate the next few weeks to getting this done. We kept finding solutions."

The Michigan Tech community reached out to all its contacts. Heldt's connections at the John Hopkins University lab sent reagent kits to help Tech's lab get started, and the Michigan Department of Health and Human Services Bureau of Laboratories was a continual source of guidance and support.

"No" wasn't an acceptable answer. When the first candidate for the lab medical director position tried to tell them why the University couldn't accomplish the goal, Heldt and colleagues looked elsewhere, finding the correct combination of expertise and a can-do attitude in Dr. Cary Gottlieb of OSF HealthCare.

Within a week, all the necessary components were moving into place, including meeting requirements of the Clinical Laboratory Improvement Amendments (CLIA), the certification needed to run medical tests. Within three weeks, the first CLIA-certified testing lab in Michigan Tech history was established, with qualified personnel ready to start testing the community.

"Between our contacts and the information we had at Tech, we were able to get up and running," says Heldt. "I was impressed with the depth of breadth and knowledge we have. A lot of PCR info came from forestry, as well as biology." The contribution of Tech's medical laboratory science (MLS) program was also crucial. "I know how to run tests, but I had no idea how to run a medical lab," says Heldt. While MLS took the lead in its areas of expertise, her team focused on safety, including sample handling and gowning protocols.

"Once we got certified, we had to train students and get a workflow," Heldt says. "The first two or three months, samples increased linearly. Every time we thought we had everything set, something changed. We were in a constant flux of problem-solving."

A University- and Community-wide Effort

As the demand for testing increased, so did the need for resources. And they were provided, from Reed's stewardship of the budget to IT services. Some researchers shifted to accommodate the lab space. Like potluck dishes, many researchers threw their equipment into the mix, labeled for return in August. Because obviously, it would all be over by then—the biomed teaching lab and Steve Techtmann's lab in the Dow Environmental Sciences and Engineering Building could be turned back over to their occupants when everything went back to normal and the fall 2020 semester began.

Heldt chuckles about it even now. "We were silly enough at the time to say, 'Of course we'll be done by August.' We all laughed, thinking it would be a couple months." But as the University set its sights on bringing students back to campus, it was clear that a robust and comprehensive program of testing, contact tracing, and support was crucial. The COVID-19 testing lab would be needed longer than expected. And all involved in the endeavor agreed that they would run the lab as long as it was needed.

After serving members of the campus community and the greater community since its inception, in 2021 the lab continued to run student, staff, and faculty tests to fill the capacity gaps in the region. When WUPHD opened its own lab, Tech's was able to close.

What Reed aptly calls an "almost miraculous effort" and "the most amazing and sustained problem-solving exercise I have ever been involved with" wound down at the end of 2021. Local organizations, including care facilities and hospitals, PHF, and others, were integral to the lab's success, Reed says. "But the collaboration, unselfish contribution of ideas and equipment, and camaraderie that you all contributed to are unforgettable, and I want to again thank everyone for your role in this critical effort," he adds.

Heldt remembers the fulfillment of the moment.

"The closing of the lab was really important," she says. "We wanted to fill the need in the community until it was no longer needed. We were really excited to close it. It meant the testing capacity was out there."

"We stood up a CLIA-certified medical lab without having one previously to serve our community. We're one of the few universities that did that. We were not only helping our campus. It was also about helping our community."Caryn Heldt, director, Michigan Tech Health Research Institute

Michigan Tech's commitment to current and future public health threats doesn't end there. What the University accomplished, the relationships it established, the sequence of events, led to new partnerships and a new mission that will serve public health now and in the future.

The Next Step in MTU's Commitment to Healthy Communities

One thing truly leads to another. For 20 months, the University operated its COVID-19 testing lab for the campus, community, region, and state. In 2022, with support from the state and federal government, it joined three other state universities working to develop the infrastructure to expand infectious disease surveillance for state health agencies.

"I'm 100 percent positive that had we not pursued the testing lab, we would not have even been on the radar of the state," says Heldt. "During the whole time the COVID lab was running, we had a close relationship with MDHHS Bureau of Laboratories—two lab representatives visited in August 2020 and August 2021."

In January 2022, Tech was announced as one of four universities to receive $18.5 million in federal funding to increase genomic surveillance of emerging infectious disease threats. "Some states chose to go to a single entity, but MDHHS really wanted to do surveillance throughout the state," says Heldt, adding that the prospect is particularly important for the Upper Peninsula, because very little genetic surveillance has been done in the UP. 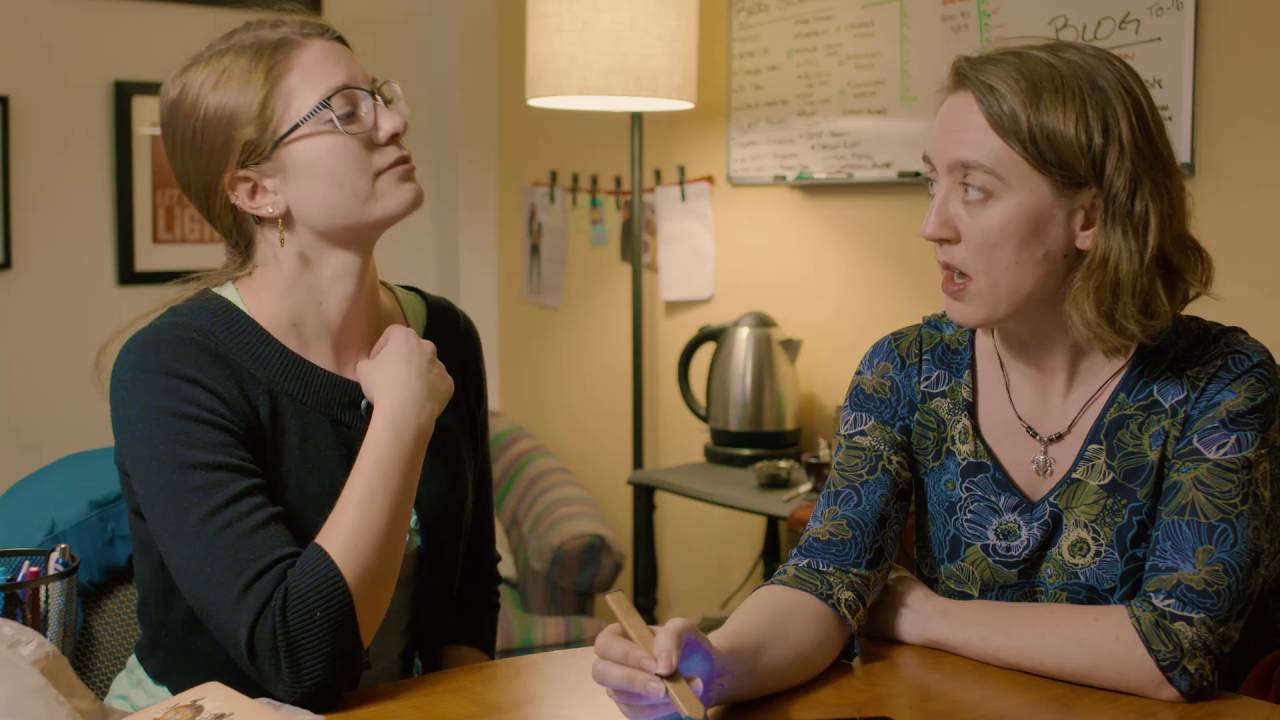 Caryn Heldt received a 2016 NSF CAREER Award for her work. Learn more about her research.

"It's a black box," she says. "Caring about the UP, what is really happening in the community, and bringing more information forth will help us learn where we are, what variants are circulating—from flu to zoonotic diseases. All of this work is purely surveillance, watching what's happening and providing it to the state, the DNR (Department of Natural Resources), and those who can potentially act on it."

Although Tech is the only state university in the partnership that doesn't have a medical school, the University has something other partnering entities don't: a bioinformatics infrastructure capable of storing, cataloging, and evaluating large genomic databases. "We are strong in the ability to do genomic sequencing, but our real strength is in bioinformatics—to look at the data and see what it means," says Heldt.

The project, which will include matching sequences with de-identified patient data to understand the severity of an infectious disease, is currently acquiring necessary equipment and personnel. The KingFisher that made such a difference in the COVID-19 testing lab's capacity has a new purpose in the project as part of the sequence-generating equipment.

Just as genomic sequencing traces the complex shifts, variants, and patterns that can help us understand and formulate effective responses to public health crises, so too does Michigan Tech continue to anticipate and lay the groundwork for the work that matters today and tomorrow.

MTU is already working with its project partners—including Wayne State University, University of Michigan, Michigan State University, and MDHHS—to share expertise. "The entire state is working on this project," says Heldt. "We are honored and thrilled to be a part of this." 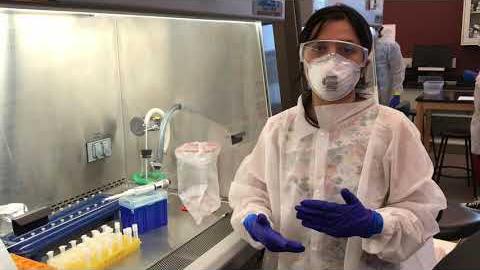 First week of operations for the Michigan Tech COVID-19 Testing Lab. Originally envisioned as a short-term measure to serve the region while the state scaled up capacity, the lab operated for 20 months.

1,200-plus samples run, with 40-70 tests per day. The testing lab relocated to the Great Lakes Research Center to gear up for students' return to campus. 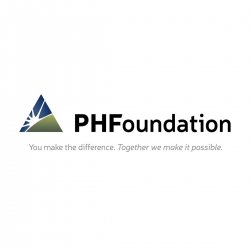 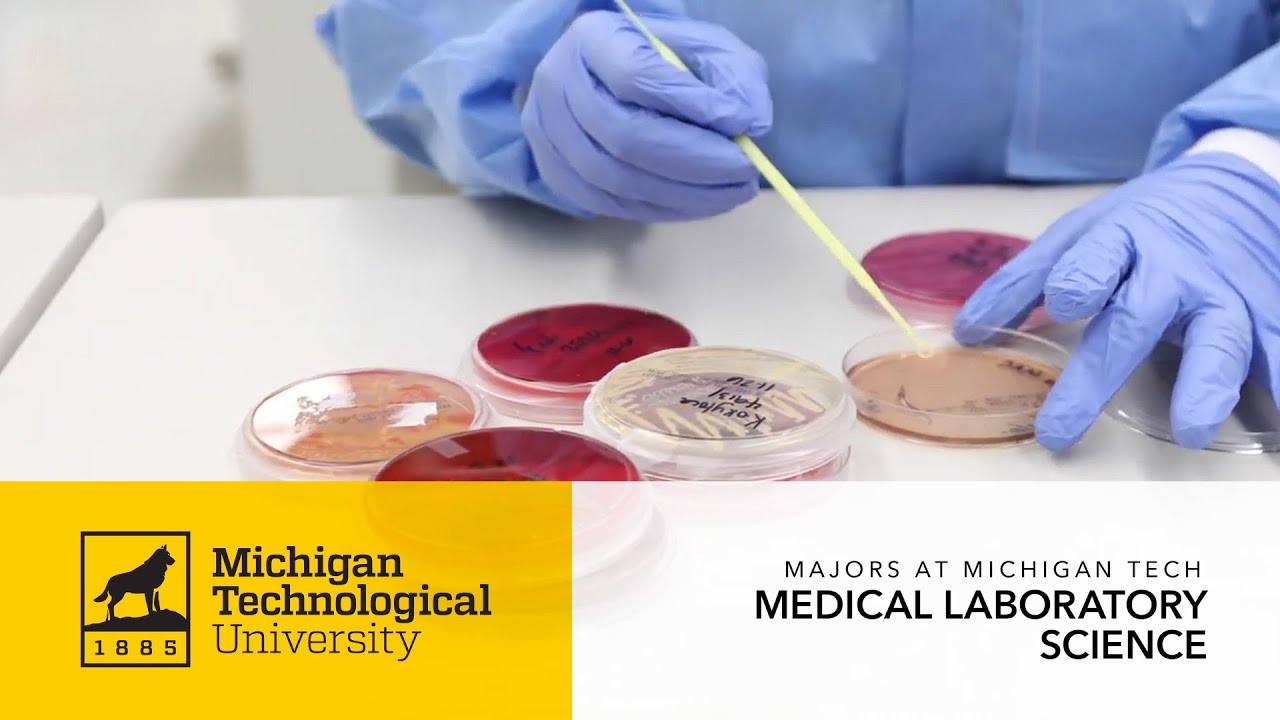 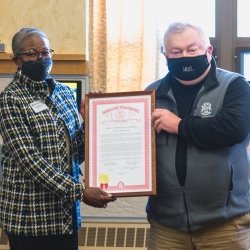 With 30,000 tests completed between April 2020 and February 2021, Tech's COVID-19 testing lab was recognized in a tribute by the Michigan Legislature and Governor's Office for contributions to community health and safety.

40,000 tests were run over the life of the lab; operations wound down at the end of the fall 2021 semester. On-demand testing continued through the Western Upper Peninsula Health Department. 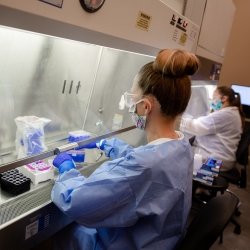 Michigan Tech was announced as one of four state universities to receive $18.5 million in federal funding to expand infectious disease surveillance.

Carrying out its role in the statewide genomic surveillance project to address current and future public health issues, MTU's team is in the process of hiring people and ordering equipment.