Radar and Risk in the Straits of Mackinac

By Kelley Christensen
Share this story:
Deploying high-frequency radar in one of Michigan’s most turbulent waterways.

The currents are also part of the complex lake system that links Lake Michigan to Lake Huron. Monitoring currents and waves in the Straits— and throughout the Great Lakes—is of great interest to scientists, municipal managers, the shipping industry, environmentalists, and government agencies.

In late May 2019, the waters of the Straits were calm, ruffled only by wind and boat wakes, on a brilliantly sunny day. Onboard the S/V Osprey, one of Michigan Tech’s survey vessels, testing was underway to measure a radar pattern across the water from temporarily installed high-frequency radar antennae.

During the visit to the Straits of Mackinac, Lorelle Meadows, dean of The Pavlis Honors College and an oceanographer by training, and Guy Meadows, founding director of the Great Lakes Research Center (GLRC) and the Robbins Professor of Sustainable Marine Engineering, conducted the first test of an onshore high-frequency radar system specifically tuned to map complex current patterns in the Great Lakes.

High-frequency radar is a shore-based remote sensing system used to measure currents offshore by sending a low-power electromagnetic pulse over the water.

Developed on ocean shorelines, the electromagnetic wave interacts with marine surface waves, which scatter the radar signal. By measuring the return pulse bounces from marine waves back to the radar antenna, researchers are able to map the speed and direction of the underlying currents.

The Straits of Mackinac, where Lake Michigan and Lake Huron meet underneath the towers of the five-mile-long bridge, are known for their unpredictable currents and wind. The bottleneck of the Straits is kept busy by freighter traffic and the ferries that take tourists to and from the famed Mackinac Island. Not only do the Great Lakes provide shipping lanes, but more than 30 million Americans rely on the lakes for drinking water.

“A lot of the infrastructure in the Great Lakes that gives us drinkable water is within a few miles of the coastline,” Lorelle Meadows says. “A system like this could be valuable in different strategic locations. I could imagine it in southern Lake Huron near Port Huron and Sarnia, at the Detroit River or the Chicago waterfront—any place you want to have insight into the way the currents are moving.”

Watch High-frequency Radar in the Straits of Mackinac video 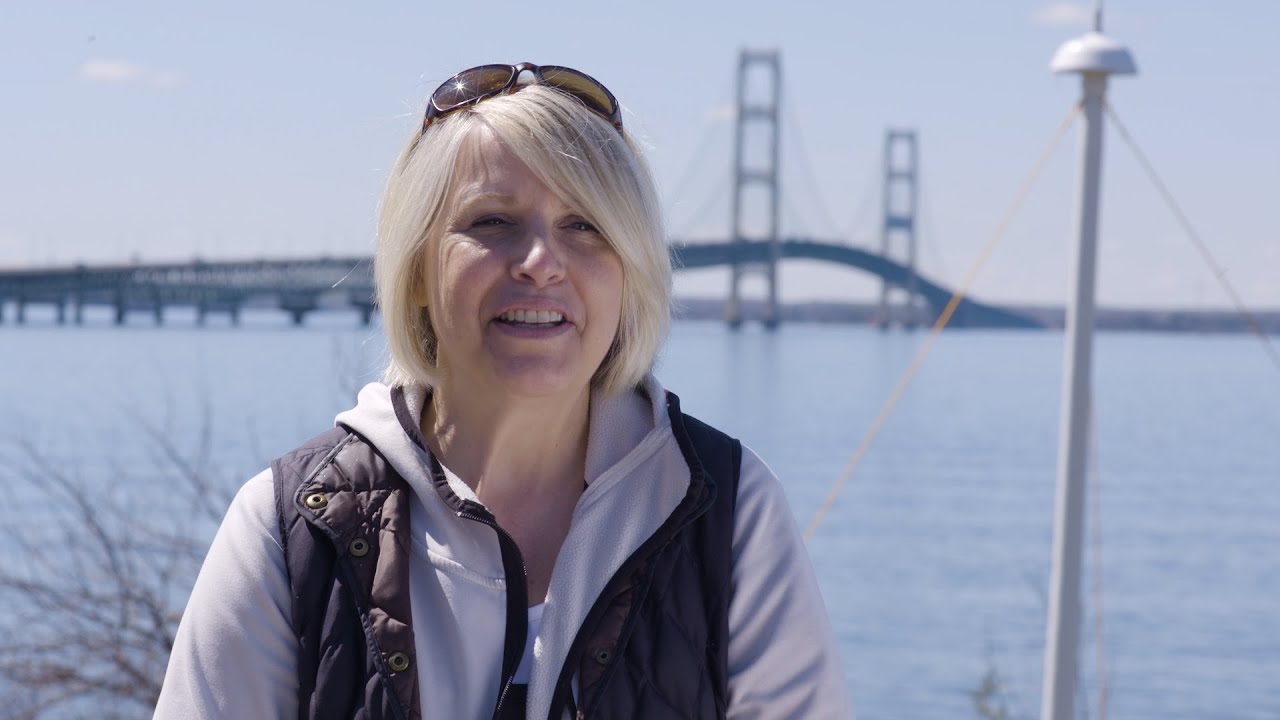 High-frequency Radar in the Straits of Mackinac

In May 2019, with funding from the Great Lakes Observing System (GLOS), Lorelle Meadows and a team of scientists temporarily installed two 14-foot CODAR SeaSonde high-frequency radar antennae, one on each side of the Straits just west of the Mackinac Bridge. Because of its sheer size, there was the potential that the bridge would interfere with the radar signal; field testing proved that the bridge did not directly interfere, a big step in moving the radar project’s viability forward.

Drifting along the shadow of the bridge, Travis White, research engineer at the GLRC, sat at the Osprey’s helm, ensuring the vessel kept a precise trajectory along waypoints to test the radar signal. Mike Garcia, a systems engineer with CODAR Ocean Sensors, spoke on a two-way radio with Lorelle Meadows about the strength of the radar signal.

Unlike buoys, which provide single-point measurements, high-frequency radar antennae use broad beams, which intersect over the water surface to create maps of an entire area.

“Each station individually can only tell you the speed at which a current is traveling toward or away from it,” Lorelle Meadows says. “An individual antenna only provides the radial component of the current. But by combining the two stations together we achieve the full surface current vector.”

The pilot testing of the temporary radar antennae also took the Osprey the better part of a mile from the Mackinac Bridge to the west alongside one of Michigan Tech’s buoys, 45175 Straits West. Tethered to the lakebed during Michigan’s spring, summer, and autumn, the buoy tracks wind speed, direction, and gusts, as well as wave height and direction, water currents, water and air temperature, wind chill, and dew point. As the Osprey bobbed beside the buoy, it was readily apparent how vast the Straits are. Just as the Mackinac Bridge is more impressive from a boat floating beneath it than from a car driving across it, the Straits seem to stretch on, despite being a narrow point in the Great Lakes. The vividly yellow buoy provides crucial information, but from just one point. Radar coverage could be more comprehensive.

“The hope is to produce vector maps every half hour,” Guy Meadows says. “The Straits West buoy reports conditions at a single point every 10 minutes. This system has the capability to create a new vector map of currents every 30 minutes, every day.”

But as concerns about environmental contaminants in the Great Lakes grew, so did interest in deploying the system. If it could mean reducing risk and better understanding the lake systems themselves, what was there to lose? GLOS approached Lorelle Meadows with a request to fund a pilot system.

“For a long time, we’ve been asking people to listen to the story that this technology is valuable in this space,” she says. “The fact that we were finally heard and we can make an operational capability for fresh water is huge for freshwater science.”

Beyond their use to scientists, vector maps can be used by many different interests: providing warnings to ships about currents that might force them aground or off course, giving vital information to search and rescue operations, tracking a hazard spilled into the water, tracking ice flows, or monitoring harmful algal blooms to protect municipal water intakes.

Vector maps, like buoy readings, provide information beneath the surface of the waters, which might appear calm above, hiding turbulence below. During the pilot test in late May, staidly drifting clouds in the sky shimmied and dipped in the cold water of the Straits. The Osprey darted to the side of the towers of Mackinac Bridge, the reflection mixing like watercolors, smeared by the wake of a passing lake freighter. The scene belies how differently wind and current might behave on a given day.

Back at the GLRC, the researchers are processing data and have applied for permanent GLOS and State of Michigan funding for the radar antennae, which will operationalize this capability for the Straits and also allow the researchers to explore further uses of the technology in freshwater.

GLOS is following up on their $300,000 grant in 2019 to purchase, site, and test the high-frequency radar system. In project year 2019-20, GLOS granted Michigan Tech an additional $150,000 to install and operate the system. “High-frequency radar data is new to the Great Lakes,” says Kelli Paige, GLOS chief executive officer. “By funding the permanent installation in the Straits, we hope to see long-term benefits for those living near the bridge and beyond in lakes Huron and Michigan.” Specifically, the technology helps by providing information that can be used for safe boating, spill response and cleanup, and research.

“Our ocean coasts are instrumented with these towers,” Lorelle Meadows says. “This is our opportunity for the Great Lakes coastline to be.”