Smart athletes, Air Force funding, a new cybersecurity program, and the anatomy of the Husky Statue.

Huskies are here to work hard in the lab and classroom—and out on the field, court, and ice. “Our athletic teams are as dedicated to earning their degrees as they are to winning championships. Their ‘smarts’ are an advantage in high-pressure situations—and it really sets us apart. Michigan Tech student-athletes raise the bar with their overall GPA, retention, and graduation rates,” says Suzanne Sanregret ’93 ’06, athletic director, Michigan Tech.

Earlier this year, Forbes named the top 25 colleges and universities in the nation for STEM (science, technology, engineering, and mathematics) and—no surprise—Michigan Tech made the cut.

"It is exciting to see the increasing recognition of the high quality and accessibility of a Michigan Tech Education."Michigan Tech President Glenn Mroz '74 '77

What’s magnetic, ionic, and can turn spiky like a hedgehog? Ferrofluids. What’s the big deal? Michigan Tech researchers are looking to these needle-like jets of ionic fluid in hopes they’ll one day propel small satellites through space.

Approximately 1,300 active satellites currently orbit the Earth. Some are the size of a school bus, others the size of a smartphone. And more than 9,000 new satellites will be launched in the next 10 years. Most small satellites don’t move by themselves, so researchers are looking at ways to propel them once launched into low-Earth orbit.

One method of micropropulsion involves microscopic, hollow needles that use electricity to spray thin jets of fluid, pushing the spacecraft in the opposite direction. But the needles are intricate, expensive, and easily destroyed.

To solve this problem, L. Brad King, Ron and Elaine Starr Professor in Space Systems at Michigan Tech, is creating a new kind of microthruster that assembles itself out of its own propellant when excited by a magnetic field.

“We’re working with a unique material called an ionic liquid ferrofluid,” King says, explaining that it’s both magnetic and ionic, a liquid salt. “When we put a magnet underneath a small pool of the ferrofluid, it turns into a beautiful hedgehog structure of aligned peaks. When we apply a strong electric field to that array of peaks, each one emits an individual micro-jet of ions.”

This year, the Air Force Office of Scientific Research (AFOSR) awarded King a second contract to continue researching the physics of ferrofluids. “Instead of modeling a single peak, we’ll scale it up and model multiple peaks.”

The team is also collaborating with Juan Fernandez de la Mora, a professor of mechanical engineering and materials science at Yale University, one of the world’s leading experts in electrospray.

Get a look at what's happening inside our Ion Space Propulsion Laboratory.

Attacks on computer systems are new, innovative, and fast. Michigan Tech is helping create a workforce ready for the challenge.

Launched in 2016, Michigan Tech’s master’s degree in cybersecurity was the first graduate program of its kind in Michigan. Other schools are catching on, but our program is still unique.

“Our MS in cybersecurity is special because of the combinations of learning environments. Our computer science department, the electrical and computer engineering department, and our School of Technology joined forces to provide a foundation in information confidentiality, integrity, and availability across disciplines. This gives our students exciting education and research opportunities,” says Min Song, Dave House professor and chair, Department of Computer Science, Michigan Tech.

Electrical engineer Ryan Olson ‘14 was working for an oilfield service company when he started to think about pursuing a master’s degree. “The company I was working for was going to transfer me out of the country. My academic advisor told me about this new option, and I decided to pursue it. I’m using my electrical engineering background to focus on industrial control system security.”

Olson, one of the first students to enter the program, aims to graduate in 2018. “It’s nice to be back ‘home’ at Michigan Tech, and I’m excited about where my new career will
take me.”

The Anatomy of the Husky Statue

In just three years, this larger-than-life dog has become an icon on campus. He’s donned a white coat for National Engineers Week, sat nicely for thousands of photo ops (er, selfies), and provided a centrally located meeting spot on campus (“Let’s meet at The Dog . . . no, not THAT Dog.”)

Learn more about our beloved statue at the heart of campus.

The proud pup sits on a 25-ton, 1.8 billion-years-old boulder—a gift from civil engineering alumnus Roland Huhtala ’74—harvested from a quarry near Covington, Michigan. 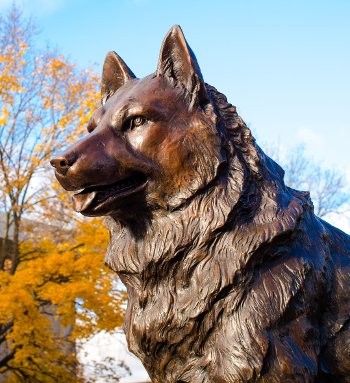 We love our donors:
Our Husky Statue was made possible thanks to Dan (1945–2015) and Joan Lorenzetti, friends of Michigan Tech.

Knock, knock. What's inside? Nothing! This Husky is made from a hollow, bronze casting. 4,500 pavers—including 1,030 personalized, engraved pavers—surround The Dog in an area of campus known as Husky Plaza. Find your paver.