My Cousin, My Brother

Last fall, mechanical engineering major Harsh Malu felt like any first-year Michigan Tech student—a little nervous. Huskies travel far and wide to get to campus, and Harsh was moving 8,000 miles from his home of about three million people in Sangli, India, to Houghton, Michigan—population 12,000.

“I was looking for a peaceful place to study away from the hustle and bustle,” Harsh says.

Anxiety hovered as Harsh wondered if he could or would make any friends.

“There’s an active Indian community on campus, but just because I might look like another student doesn’t mean I know them or am friends with them.”

Harsh’s trepidation eased when he attended a ceremony for Lord Ganesha (god of wisdom and learning and remover of obstacles) hosted by the Indian Students Association (ISA).

“A new friend let me know there was someone at the ceremony with the same last name as me, and that I had to meet him,” Harsh says.

That someone was Prannay Malu ’17, then an electrical engineering master’s student. “It’s an unbelievable thing, really. In India, it’s pretty rare to encounter someone with the same surname,” Prannay explains.

Harsh phoned home after the gathering. “I asked my granny if we had any cousins who aren’t in the city anymore. And she said, ‘Go on . . . ’ She told me how Prannay’s family migrated from our city to Nishik, India, about 30 years ago.

“That made me and Prannay cousins! My family and close friends back home could not believe it!”

As the school year marched on, the fourth cousins became more like brothers. “Harsh is like my younger brother, and I feel responsible for him. I love being a big brother—making sure he’s comfortable, helping him,” Prannay says.

“Prannay is who I call at 2 a.m.,” Harsh says. “He’s who will cook for me, anytime day or night. He wants good things for me. I remember one day he called me and asked what I was doing. He told me to drop everything, put on formals, and come to the ISA general elections. He encouraged me to run for the fundraising chairperson position. I took his advice, and now I’m the chair. I’m so grateful for his encouragement.”

"In India, it's pretty rare to encounter someone with the same surname."Prannay

Prannay has since graduated and is working with Astute Engineering LLC, a Metro DC-area startup. “I miss the safety and security of Houghton. I’m from a small town of about two million people back home in India; Houghton changed my definition of small. Everyone was so kind and caring, always looking out for one another.”

“Huskies struggle together, because in the end, we all want good jobs,” Prannay says. “I’m no longer on campus, but want the best for Harsh. There will be hardships and challenges—it will make him a better person, a better human.”

Back in India, Harsh and Prannay were 10 hours apart in a country with more than a billion people. Would they have ever met? “No, I don’t think so,” Harsh says. “It happened because of Michigan Tech—and it’s a miracle.” 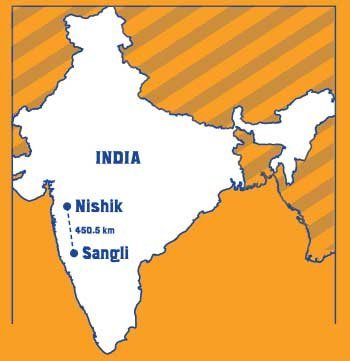