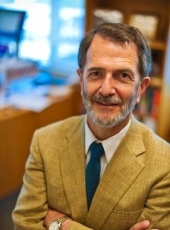 A geophysicist, Pennington’s research is centered on the response of Earth materials to changes in physical conditions, such as stress, saturation, and temperature. The applications of this work are found in induced seismicity, deep earthquakes, as well as oil and gas exploration and development.

He has worked in both academia and in industry and has conducted fieldwork at sites around the world. In the 1970s, he studied tectonic earthquakes in Latin America and Pakistan. In the 1980s, at the University of Texas at Austin, he studied the relationship of earthquakes to oil and gas production. Following that, he worked at the research laboratory for Marathon Oil Company, studying techniques to improve the identification of, and production from, oil and gas reservoirs.

Since 1994, he has been at Michigan Tech, teaching and conducting research into geophysical observations of oil and gas production. He spent several years as the Chair of the Department of Geological and Mining Engineering and Sciences, and became the Interim Dean of the College of Engineering in 2013, moving to the permanent position in 2014 and retiring in 2018.

Pennington has served as the President of the American Geological Institute and as the first vice president of the Society of Exploration Geophysicists. He was a Jefferson Science Fellow at the US Dept of State and the US Agency for International Development. He has published over thirty peer-reviewed papers and coauthored one book (with his students).