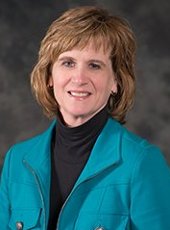 Paula graduated with honors from Michigan Tech in 1985 with a bachelor of science degree in business administration. Following graduation she relocated to Fort Lauderdale, Florida where she accepted a position with Sensormatic Electronics Corporation (a leader in the electronic article surveillance industry) in their finance department. During her three years with the company, she transferred to the marketing department to focus on national sales support.

Moving back to the Copper Country in 1988, she accepted a position with the Michigan Tech Fund in January of 1989 as Assistant Director of Annual Giving, moving into the director's position the following year. During this time she has overseen numerous annual giving initiatives including the Michigan Tech Annual Fund, Campus Campaign, Reunion Giving and the Presidents Club. In 1998 she initiated the Tech Parents Annual Fund component of the annual giving program which has raised close to $1 million for student organization and activity needs.

She was a member of the fundraising team that successfully completed the University's $140 million Leaders for Innovation Campaign, and is currently one of the fundraisers working to achieve the Generations of Discovery Campaign goal of $200 million. During her career, she served as an advisor to the Michigan Tech Student Foundation and was the Executive Secretary for the Huskies Club for many years. Professionally, she is a member of the Council for Advancement and Support of Education (CASE).

Through her position she has provided administrative support to the Presidential Council of Alumnae (PCA) for almost 15 years, helping to plan and facilitate the annual meeting and induction ceremony.  In addition, she has provided leadership in building the PCA Endowed Scholarship Fund.  This past year she served on the PCA committee that planned and executed the Women of Tech celebration event; and, she is currently providing leadership for a two-year alumnae giving initiative that has brought in 270 additional female campaign donors and raised more than $43,000 for the newly established Women at Tech scholarship fund.

Throughout her years of employment at the University she has served on the Presidents Commission for Women, a group charged with improving the environment for women on campus, and was a member of the Childcare Center Committee that worked with the University administration to make the current child development center a reality.

Paula and her husband Bob reside on the Portage Canal in Hancock, Michigan.  They have a daughter, Bella, and a step-daughter, Gina.

In recognition of Paula Nutini's significant achievements, she was inducted into the Presidential Council of Alumnae (PCA) in 2012.