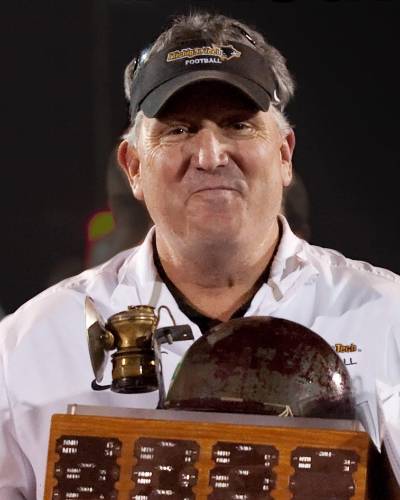 Tom Kearly was Michigan Tech’s head football coach from 2006 to 2016 and is arguably the most influential coach in the program’s history. His 70-44 record in 11 seasons leading the Huskies speaks for itself. What’s more was his leadership for hundreds of student-athletes and his overall commitment to growing the Tech football program.

Perhaps the best summation came from then-president Glenn Mroz upon Kearly’s retirement in 2016: “Tom surely has built a team and a program, but importantly, has built a culture of high expectations and accountability among the student-athletes both on and off the field. We're euphoric when they win a game, and cry with them if they lose. But they always win academically, and the character that is forged along the way is Tom's legacy. It's more than being a coach, its leading a family. We are grateful."

Kearly arrived at Tech in 2000 as the associate head coach and offensive coordinator before taking over as the head coach in 2006. He moved the program into the upper echelon of the Great Lakes Intercollegiate Athletic Conference, helping it win the school’s second-ever GLIAC football title in 2012. Two years later, the Huskies earned just the program’s second-ever berth into the NCAA Division II playoffs with a 9-2 record.

Kearly’s final seven years leading the program were the most productive as Tech compiled a 48-24 mark and had at least seven wins in five of those years. In 2010, Kearly earned GLIAC Coach of the Year after taking a 2-8 team of the year before and turning it into a playoff contender at 8-2.

“It was a privilege to coach the quality student-athletes at Michigan Tech. To be around the young men made it a treat to go to work every day,” he said.

In addition to helping the program succeed on the field, Kearly was instrumental in facilities improvements for the program. A synthetic turf was installed in 2008, allowing Tech the ability to practice at Sherman Field (especially in the spring). New stadium seating was constructed in 2018 with more improvements scheduled prior to the 2019 campaign. The new facility will be named Sherman Field at Kearly Stadium in honor of Tom and his father, Ted, who served as Tech’s athletic director and football coach.

Tom Kearly’s coaching history included more than 400 games over 38 years. He spent 19 seasons at NCAA Division I CMU including nine as offensive coordinator prior to coming to Tech.

The Hancock, Michigan native holds a bachelor’s degree in physical education from Winona State and a master’s in athletic administration from Central Michigan University.

Because of Kearly’s relationship, history, and success with Michigan Tech, he is being awarded the 2019 Honorary Alumni award.