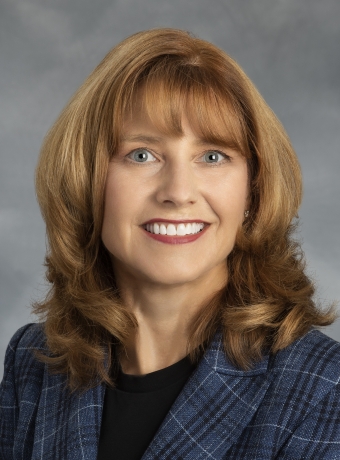 Having served as Chair of the Michigan Tech Board of Trustees and in numerous leadership positions in the automotive industry, Julie Fream has had a distinguished career since earning a chemical engineering degree in 1983.

"Michigan Tech changed my life. Through the opportunities and friendships, I was able to successfully launch my professional journey."

Fream currently serves as President and CEO of the Original Equipment Suppliers Association (OESA), a trade association for automotive suppliers.

Prior to that, she was Vice President of the North American Customer Group at Visteon Corporation, successfully working with many automotive manufacturers and launching numerous programs.

Fream began her career with General Motors in 1983 as a manufacturing engineer. She moved to Ford in 1989 and later had a five-year stint at TRW

In addition to her work on MTU Board of Trustees (2011-18), Fream has served on the Michigan Tech Alumni Board of Directors (1988-2000). She currently serves as the Chairperson for the Beaumont Health Board of Directors.

"I have always felt it was very important to give something back to the broader community," she said. "I support Michigan Tech and other organizations to do this for the various communities I live and work in."

A native of Mt. Clemens, Michigan, Fream moved to Dearborn at the age of three and graduated from high school there in 1980. Along with her degree from Michigan Tech, Julie also holds a master’s degree in business administration from the Harvard Business School.