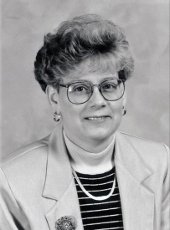 Janet earned a Bachelor of Science in Mathematics in 1974 and Computer Science in 1975, both from Michigan Tech. She has worked for Dow Chemical since 1979, starting as a systems analyst and designer and progressing to technical project manager. She is currently program specialist for the Year 2000 Project. Janet is active in helping recruit Michigan Tech students and is a member of the College of Sciences and Arts Advisory Board.

From the 1997 Presidential Council of Alumnae Induction