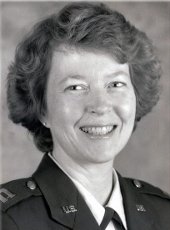 Ruth joined the Air Force in 1980, an Honor Graduate from basic training, and was stationed at Kl Sawyer Air Force Base as an Avionic Instrument Systems Technician. The Air force selected her to attend Michigan Technological University in 1984. While here, she received the Carl Schonberg Award, given by the faculty at Tech to the student selected as the outstanding electrical engineering undergraduate. In 1986, Ruth graduated from Michigan Technological University (summa cum laude) with a Bachelor of Science in Electrical Engineering. She went on to complete Officer Training School as First Honor Graduate. Ruth spent the next six years at Kelly Air Force Base in San Antonio, Texas, first as a COMSEC Electronics Engineer, then as the Chief of the Electromagnetics Signatures Branch. She moved to Offutt Air Force Base in Omaha, Nebraska, in 1993 where she was a Radar Sensor System Engineer. She is a Captain in the Air Force, stationed at Wright-Patterson AFB in Dayton, Ohio, first as a Future Ground Radar Systems Engineer and now as the Executive Officer for a 500-person directorate. In her free time, Ruth has been involved with the Big Brothers and Sisters Program, the Evangelism Committee at church, hospital volunteer work, and is a facilitator for the Lieutenant's Professional Development Program. During Ruth's stay at Michigan Technological University, she was a member of Tau Beta Pi, initiated into the Phi Kappa Phi’s Honor Society, and served in the Society of Women Engineers.