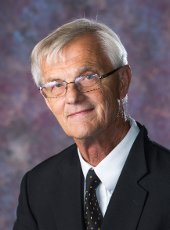 He returned to Michigan Tech in 1971 as an Instructor and was promoted to Assistant Professor after completing his PhD in 1972. In his 40 years as faculty in the Department, he taught a range of geotechnical, materials, and transportation related courses. In 2011 he retired from his academic career at Michigan Tech and is now a.

Dr. Alkire was also very active in research and professional service over the years, serving on numerous ASCE committees and was editor for the Journal of Cold Regions Engineering. His research has been published in Geotechnique, Journal of Glaciology, and the Transportation Research Record.

His efforts were instrumental in bringing the Transportation Technology Transfer Center (now known as the Center for Technology and Training) to Michigan Tech in 1988 and later the Tribal Technical Assistance Program. The Center for Technology and Training (CTT) continues to grow, now assisting over 400 agencies in Michigan to manage their roadway assets. CTT has been recognized in a nationwide search for best practices on improving transportation safety for the Roadsoft program, which was initially launched in 1991 under Alkire’s leadership. The research funding from the State of Michigan and the Federal Highway Administration associated with the centers exceeds $4 million.

Bernie and his wife, Pat, reside in Houghton and have three daughters and four grandchildren. Since retiring, Bernie has studied the German language and enjoys traveling abroad.