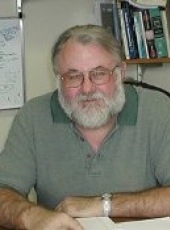 Larry Lankton has been at Michigan Tech since 1981. He received his Ph. D. in American Civilization from the University of Pennsylvania. Prior to locating on the Keweenaw, he served as a curator at the Henry Ford Museum in Dearborn, Michigan, and as an historian of technology for the Historic American Engineering Record in Washington, D. C. At MTU he currently teaches Modern American History, An Introduction to Material Culture, The Automobile in America, The Copper Country, and a seminar for first-year students.

Lankton is primarily interested in 19th century American industrialization and the social history of industrial communities. He particularly focuses on the history of the copper mining industry that once thrived on the Keweenaw Peninsula. He has authored three books and several journal articles on the history of the Lake Superior copper district. His research has been supported by fellowships at the Smithsonian Institution, the Hagley Museum and Library, and the Dibner Institute at MIT. Lankton is a past president of the Society for Industrial Archeology.