Michigan Technological University's 1988 International Club is tight. Known as I-Huskies, they keep in touch, they still bleed black and gold—and they're gathering on campus during Michigan Tech Alumni Reunion August 2-4.

The catalyst for the group's 30-year reunion is Aldo Murut of Brazil, a 1991 graduate with a master's in metallurgical engineering. He and co-organizers Stephanie White ’91 (hails from the USA, graduated with a dual major in mechanical engineering and business) and Thomas Methner ’90 (from Germany, earned his master’s in mathematics), are working from a list of 32 members spanning 1988-91. The club roster includes students from India, Turkey, Germany, Lebanon, Finland, Japan, Morocco, Cyprus, Scotland, Switzerland, Brazil, Austria, Wales and the USA. So far, 20 Huskies from 10 countries are planning to come to Houghton, some with their families, to view what’s new on campus and flashback to the end of a memorable decade.

Microsoft Word was released. The minivan was introduced. Civilians got access to GPS technology. The Soviet Union collapsed. The first computer virus flared. The late 1980s and early 1990s were interesting times indeed, says Murut, but these I-Huskies couldn't be distracted by headlines (or Nintendo).

"We all came from our different countries, converging into Houghton. We were laser-focused on dealing with our adaption to MTU and the UP weather," Murut says.

George Michael, Michael Jackson and George Harrison were among the chart-toppers in 1988, but perhaps Bobby McFerrin's hit, "Don't Worry, Be Happy," best sums up what group members meant to each other.

"Many of us didn't know what to expect when we arrived in Houghton," Murut says. "An unbelievable school, strong academically and with a big heart receiving us all. Yes, we did study hard, but the amount of activities and fun were memorable, too."

Some favorites include Husky  traditions like Winter Carnival, broomball and Parade of Nations. Other fond memories: skiing, bonfires, trips to Isle Royale National Park and hanging out at two venerable Houghton watering holes, The Library and the Douglass House.

"MTU was the center of the world for us, and nowadays is at the center of our memories and hearts, and will always be. GO I-Huskies forever!!!"Aldo Murut, Michigan Tech International Club

"I'm not sure what was so special about this group, but after 30 years we remain connected," says Murut. Social media helps. "Many of us have not seen each other since graduation, but others have met face to face," he says. "For instance, several I-Club members came to my 1995 wedding in Brazil, and we remained connected since then."

"Perhaps bringing the culture from our countries to Michigan Tech and Houghton made us all look at life and the world differently. Not only beautiful friendships developed, but also a sense of belonging to a group that carries the MTU torch wherever it goes."Aldo Murut, Michigan Tech International Club

Murut has been emailing members for several months with reunion details, but there are some members of the group he hasn't been able to get in touch with. I-Huskies who want to join the celebration are welcome to contact him.

Co-organizer Methner says he’s really looking forward to the event, which will include participating in overall Michigan Tech Alumni Reunion activities and meeting both current and past International Club members. On Friday, the group will embrace the Husky tradition of giving back by volunteering for Copper Country flood relief efforts.

“Houghton and MTU have always made me feel at home," he says. "The International Club has fostered this as well, and it is a testimonial of this special relationship when approximately 20 people from all over the world, who have not seen each other for ages, make a strong effort for meeting at this 30-year reunion."

Pasty picnic. Canal cruises. Keweenaw rambles. That special instructor, classmate or place you’ll never forget. Michigan Tech Alumni Reunion is August 2-4. In addition to special honors for the Golden Ms—the select group of alumni who graduated 50 or more years ago—the 2018 reunion highlights the classes of '58, '68, '78, '88, '93, '98 and '08. But all Huskies and friends from any and all years and their families are warmly welcomed, from local residents to international alumni. Check out the full reunion schedule and register here. 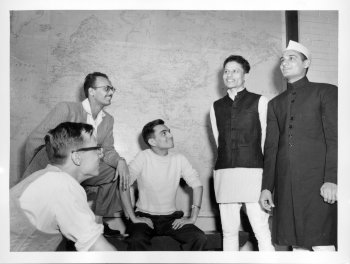 Michigan Tech's International Club, around since 1950, continues to be a bridge of understanding across nations to help Huskies from around the globe share their cultures and acclimate to life in the Keweenaw Peninsula. International Programs and Services Assistant Director and club advisor Helen Halt says some of the I-Club’s current offerings include a buddy program for incoming exchange students that partners them with current domestic students, and weekly language classes, such as Chinese and Japanese, taught by both domestic and international students. The annual International Night, featuring a global feast and performances from around the world, is a campus-wide favorite. To learn more about upcoming events, you can follow the I-Huskies on Facebook. To join, contact club president Rene Teufack via the International Club student involvement link.