A Star from the East

Five years ago, Ali Haidar left his home in Lebanon to join the rest of his family in Ontario, where they had moved in search of a better life.

When he arrived, he found a sport he was born to play.

Haidar was a tenth grader at J. L. Forster High School in Windsor when one of the coaches spotted the 6-2 16-year-old in the hallway and asked if he’d ever played basketball.

Haidar had never set foot on a court. But by the following season he had earned the most-improved-player title for helping the team to a 24–6 record. In just his second year of organized basketball, he was named the team’s most valuable player.

"Jay is a coaching friend of mine and told me he saw a kid from Windsor who wanted to be an engineer," said Luke. "Ali was pretty raw, but we liked him enough to have him come to Houghton for a visit. We were excited that he had only been playing hoops for a few years, because that meant he had a lot of room for improvement."

Haidar, who by then had grown to 6–7, enrolled the following summer and made an immediate impact. By the fifth game of the season, the freshman forward found himself in the starting line-up, averaging 9.9 points and 5.8 rebounds per game. That was enough to earn him another honor, this time as the top newcomer.

Haidar’s skills continued to flourish in his sophomore season, and he earned first-team All-GLIAC honors. He finished fifth in the league in scoring at 16.1 points per game and seventh in rebounding (6.7 per game).

That’s when he considered returning to Lebanon for an extended visit. "I contacted the Lebanon basketball federation about trying out for the team," said Haidar. "I sent them some tapes of me playing."

Those tapes so impressed the Lebanese basketball team they invited him for a summer tryout. In June, Haidar left his home in Houghton and headed to his other home, Lebanon, for the first time since he left for Canada in 2006. He was one of twenty-five players competing for twelve spots on the national team.

"All the guys on the team were very supportive of each other, but we would battle pretty hard on the court," says Haidar.

Haidar was among the top twelve and made his international debut at a tournament in Jordan, where the Cedars finished in fifth place with a 2–2 record.

"The play was very physical and fast, since the shot clock was 24 instead of 35 seconds. Everyone also had seven-footers on their team," said Haidar, who averaged about twenty minutes of action per game. After the tournament, he continued training with the team, but he also spent time with his family.

"My mother and siblings came along to Lebanon, and I was able to attend my sister’s wedding. I also saw some of my friends from when I was growing up."

As the summer wound down, Haidar faced a tough decision: continue training with the Cedars and compete in the Asian Championships, where they might earn a spot in the 2012 Olympics, or return to Houghton, where the Huskies were hoping to climb to the top of the Great Lakes Intercollegiate Athletic Conference.

"I chose Michigan Tech because I wanted to earn my degree and help the Huskies win a championship," said Haidar, who carries a 3.1 cumulative grade point average in electrical engineering.

Tech ultimately benefits, both from that choice and from Haidar’s international experience.

"Ali has really improved his perimeter game," said Luke. "His work off the dribble has also improved. He is a much more complete player."

As it happened, China won the Asian Championships, ending the Cedars’ dream of Olympic glory. But Haidar hopes he can fulfill his other dream, bringing the Huskies a GLIAC Championship in March. He's leading a squad that a pre-season media poll tapped to finish first in the GLIAC. 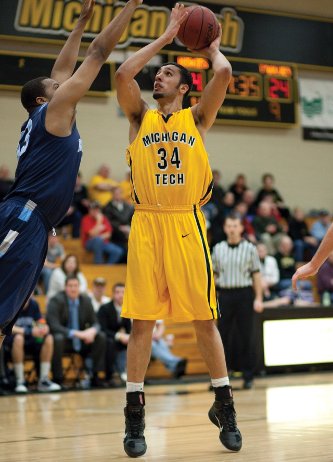