Sue Ellen Kingsley was on a mission: her friends were in dire need of clean drinking water and had asked for her help.

It was 2006, and she had just returned home to the Copper Country from a small village in northwestern Guatemala, where she had been working as an accompanier. "Accompaniment programs bring in people from privileged countries to provide space for native people to do what they need to do, even when their home country is in turmoil," she explains. "There's much less danger of violence from the government and military when there are accompaniers present."

People in her community needed more than peace and safety; they also needed good wells, so she brought word to Michigan Tech's civil and environmental engineering department.

Coincidentally, a new student chapter of Engineers Without Borders–USA (EWB-USA) had recently been founded—and this was exactly the type of project they were looking to take on. EWB-USA pairs volunteers with developing communities to improve their quality of life. Its student chapters give undergraduate and graduate students a chance to practice real-world engineering before being handed their diplomas, says David Watkins, EWB advisor and professor of civil and environmental engineering.

Not every student gets to complete an entire project. But they learn a lot; EWB-USA operates on an industry model—with feasibility assessments, data collection, alternatives analyses, detailed plans, and countless consultations with practicing engineers and the clients (citizens of developing nations, in this case) along the way. Once a plan is finalized, it's sent to EWB's national office for approval before students are sent abroad to implement their project.

"The Michigan Tech chapter typically has two or three projects going on at one time," says Watkins. "Right now, we're working with communities in Bolivia and Guatemala."

Because of Kingsley, EWB-USA students have been working with citizens in the same part of Guatemala for almost ten years on various projects, including an ongoing effort to bring clean, safe drinking water to the area's fifty or sixty families.

In recent years, local residents have built four hand-dug wells, engineered by EWB-USA students. The wells, each about thirty feet deep, provide a clean alternative to the stagnant, contaminated runoff the villagers had been drinking before.

Installing the new wells hasn't gone off without a few snafus. Specs have been misinterpreted by community construction teams, and even with new wells, some citizens find it hard to break their old water-collection habits or to maintain the new equipment once the EWB team heads home.

"It's frustrating at times, sure," says Kelli Whelan, an environmental engineering master's student. "But I've still learned so much. If the implementation had gone perfectly smoothly, it wouldn't have been as beneficial for the students involved. We've encountered social and technical road blocks, but everything we've done has been completely, 100-percent applicable to our engineering education."

Esther Johnson, a 2009 civil engineering graduate, agrees. She helped design a large, one-room school in Honduras to withstand earthquakes and hurricanes. Because a partnership with a local nongovernmental organization broke down, however, the building was never constructed.

"It was a heartbreaking decision for the team," Johnson said. "It took responsible students and great mentoring to realize that this project was only going to succeed if it had the support of the community, which it did not."

"I think we got more out of it that way," she added. "We learned how to take a step back as engineers and see the true value of a project in empowering a community."

The skills Johnson learned as a student gave her the confidence to lead; she has served as president of the EWB-USA Detroit Professional Chapter since 2010, where she puts students in local university chapters in contact with professional mentors and is the project manager of a latrine program in El Salvador, partnering with Michigan State University students.

Now, seventeen years after Kingsley's first visit to this part of Guatemala, it's become clear how large of an influence EWB-USA has had.

"There was no communication in or out of the area," says Kingsley. "Just getting there was a massive feat. Now, the community is much more connected. Life is better. There are cell phones and electricity, and children aren't falling ill with diarrhea and awful diseases because of their water."

But EWB-USA projects are far from a one-sided endeavor, she adds.

"I really don't like to think of it all as students helping developing communities, because the students have benefited as much—if not more—than the Guatemalans," she says. "EWB provides them an incredible amount of personal and professional growth. These students are our hope for international wellbeing in the future." 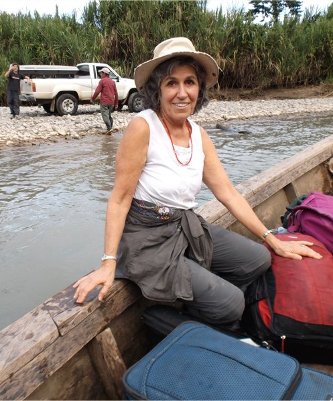 Sue Ellen Kingsley crossing the Rio Ixcan in a wooden canoe, the main way to access the Guatemalan communities of Fronterizo and Cantòn Photo: Linda Belote 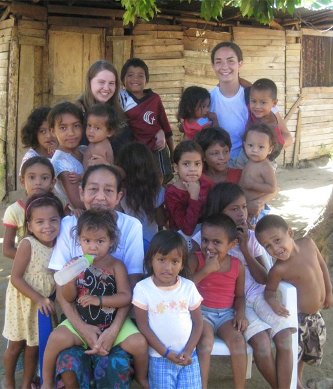 Ashley (Thode) Julien '10, left, and Esther Johnson '09 standing behind Honduran children and a woman from the community where they had hoped to build a school. Photo: Ashley Maes 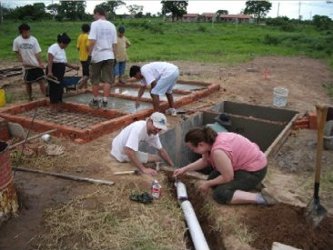 EWB team working on a septic system they designed for a school in Bolivia. Photo: Laura Oman 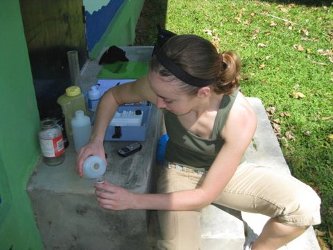