Pavlis's support of these programs began in 2005, when he underwrote the Pavlis Institute. Since then, the institute has enrolled nearly two hundred students whose studies have taken them all over the world. Now his vision extends to the College: "Through the Honors College, Michigan Tech will establish itself as a leader in educating scientists, engineers, and entrepreneurs who can be global leaders in the management of innovation," he said.

Students in the Pavlis Honors College programs predict that it will add a new dimension to their experience. "I'm so excited about the opportunities to collaborate with Research Scholars and members of the Pavlis Institute," said Anna Waller, a member of the Honors Institute. "When I see others doing great things, it motivates me to reach for the stars."

"Participating in the Pavlis Institute has been transformational," said David Shull. "I've been able to work with people from Houghton to Dubai, and it's challenged me, stretched my comfort level. And now, the College will bring people together who want to change the world. We'll see an incredible synergy."

Pavlis earned his BS in Chemical Engineering at Michigan Tech in 1938, graduating at the top of his class. In 1940, he signed on as the first employee of Air Products and Chemicals. Forty years later, he retired from the Fortune 500 company as vice president of world trade.

"Nine years ago, we modeled the Pavlis Institute on Frank's extraordinary experiences," said Michigan Tech President Glenn Mroz. "The skills he developed and seeks to pass on will be even more critical to today's students enrolled in the Honors College. We are grateful for his exceptional contributions and extremely proud that he is part of the Michigan Tech family."

Isaacson was the team's equipment manager as the Americans defeated the Russians 1–0 in the gold medal game at Bolshoy Ice Dome, which also played host to men's and women's ice hockey during the Olympic games.

"It was an unbelievable experience," said Isaacson, who has worked with the team of disabled athletes for the last four years. "The venues were top notch, and the Russian people were very welcoming. Working with this team and winning the gold was unforgettable."

Team USA, which has won three of the last four Paralympic gold medals in sled hockey, defeated rival Canada 3–0 in the semifinals before besting the host nation 1–0 in the gold-medal game.

The seventeen team members include amputees and men with congenital conditions that qualify them for the Paralympics.

"These guys are the best at what they do," said Isaacson. "It's amazing to be around them and see the adversity they overcome on a daily basis. It's also infectious to see their passion for the sport."

Sled hockey, also called sledge hockey, is played like regular ice hockey with some exceptions. Players sit on sleds with medal blades and propel themselves with modified hockey sticks.

Yes, You Can Teach Engineers to Write

Many engineering students panic at the prospect of putting words on paper. To complicate matters, their lab reports are graded by graduate students, including many foreign nationals.

"Most are nonnative English speakers, so asking them to evaluate native speakers' writing can be a little touchy," said Nancy Barr, technical communications advisor for the mechanical engineering–engineering mechanics department.

So Barr launched a class to teach those graduate students how to evaluate undergraduate lab reports by applying standard guidelines and grading rubrics.

It's an excellent course, said PhD student Ranjeeth Naik. "Once you know the guidelines, the reports almost grade themselves, and it's much easier for our students to improve."

Naik is not alone in his enthusiasm. According to student surveys, the new guidelines and rubrics "are overwhelmingly appreciated," Barr said. "The undergraduates felt it saved them time and that they learned something."

A new Welcome Center named for John Edgar McAllister will be built this summer to introduce future students and their families to the campus. The $998,000 project will consist of a 3,000-square-foot addition and remodeling of another 1,500 square feet of the Memorial Union.

The Admissions Office and Visitors Center in the Administration Building seats only forty campus visitors and has limited parking. The new center will seat more than one hundred. The project is funded entirely by donors, with the majority coming from the John Edgar McAllister Trust. McAllister, a former civil engineering student, established a thriving consulting business. After his death in 1959, he left a bequest to benefit the University and its students.

Power to the People

Every Chinese New Year, everyone in Yawei Wei's hometown, Zao Yuan, turns on their televisions and microwaves, and the power goes out. That got him wondering: isn't there some way to get more electricity to China's rural villages?

Wei, a master's student in electrical engineering, pondered a solution. Grid improvements would be costly. He might not be able to keep the lights on during New Year's Eve. But he could bring more electricity to Zao Yuan. Specifically, he could bring solar panels to his cousin's roof.

Last summer, the family installed a ten-kilowatt system of forty-eight panels above his roof with the enthusiastic support of the local power utility. "They think it might be part of a solution to help balance our electrical demand," Wei said. "People are using much more electricity than they used to, even five years ago."

So far, the system has worked so well Wei and his cousin plan to add a twenty-kilowatt system. And they are also encouraging others in their village to get on the solar bandwagon.

"My cousin is teaching people in the neighborhood about it, and they are getting interested. It can be complicated, but if you follow the steps, you can have your own photovoltaic system."

He hopes his experience will inspire others. "I wanted to share this idea with other Michigan Tech students, not only Chinese but Indian and African," Wei said. "If I can do this in my hometown to benefit my people, maybe they can too. Mine is not a lonely case."

The students won the value category at both the Global Asset Management Education (GAME) Forum IV, hosted by Quinnipiac University in New York City; and the Redefining Investment Strategy Education (RISE) competition at the University of Dayton. At GAME, which attracted competitors from 140 colleges and universities, the team helped close the NASDAQ.

Their best performing stock? Jazz Pharmaceutical, with an increase of 140 percent. "We're glad we didn't sell Jazz in November, like we were thinking of doing," said team member Nathan Sturos. 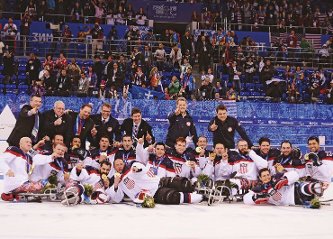 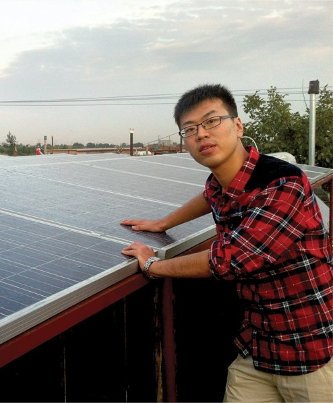 Electrical engineering master's student Yawei Wei with the solar panels he and his family installed on his cousin's roof. It's the first rural solar project in the Chinese province of Shanxi.