The National Weather Service Office in Marquette has issued a blizzard warning, effective this evening from 7 p.m. Eastern Standard Time to 8 p.m. Saturday.

Pete Pelissero takes a swig from his coffee mug and flips on the utility lights of the small SUV as we drive up the hill between the McNair and Wadsworth residence halls. He isn't worried about the robotic warning of an incoming storm crackling in over the radio. "We've got plenty to do today. We can worry about tomorrow in the morning."

Pelissero has a knack for understatement, something that comes through as he talks about his crew.

"They take care of all of the snow removal on campus beyond six feet from buildings, and they deliver freight, move furniture, collect recycling, handle grounds; there's always something that needs to be done. They work hard."

When he says "they," he's referring to six crew members and a single on-call worker. Seven people to handle the 270-plus inches of snow so far this season. That equals 100,800 cubic yards, or 19 million pounds, and it's only February. Those hardy souls are also responsible for setup and cleanup for Winter Carnival, K-Day, commencement, orientation, Parade of Nations, broomball, Alumni Reunion, Career Fair, and much, much more.

"Oh, they have to clear snow from a couple of spots in Hancock that are Tech's too. And the golf course, ski hill, places like that."

Each crew member has put in more than 150 hours of overtime this winter. When the snow hits, they start at four in the morning and go to three-thirty in the afternoon. "Heck, their coffee break isn't until nine. Then they have to go home and deal with their own snow," says Pelissero.

His radio chirps: it's Jerod Ledgerwood reporting on some downed trees behind Daniell Heights. Ledgerwood, the lead equipment operator, has been with Tech for sixteen years. While this winter has been bad, he's seen his share of brutal winters along the way. "There have been comparable winters while I've been here," he says later. "But yeah, this is a big one."

The four-o'clock-in-the-morning starts Pelissero mentions are just the half of it. "I'll actually come in and start at three sometimes," Ledgerwood says. "We have to get those commuter lots clear before the campus gets going for the day, and I'm usually pretty pumped up to get that done."

"There's a lot of adrenaline flowing when you do this job. Snow removal can be tough, looking out for cars and being efficient with your time."

Ledgerwood recalls an evening a few weeks earlier when a water line at the Student Development Complex broke, spraying a steady stream out onto the frozen sidewalk. "I got the call at ten-thirty at night. It was a twelve-hour day, but we've got to get this done."

That job was tricky: the first valve was jammed, and after consulting some utility charts, they found another valve, located beyond the reach of their wrench. "We went back to the shop, hacked off the handle, and welded on a longer one. Problem solved."

They finished up around 2 a.m., and rather than going home for an hour, Ledgerwood worked on through the night and day, finishing up the next evening.

"The funny thing is, I felt good, not tired, at the end of it. There's always something new and something different to take care of, it's an adventure. It gives you energy."

When asked how he'd made it through the long winter, Ledgerwood shrugs. "You just roll through it," he says. "I love being busy. I love my job."

"And we'll be working on all of the projects that have been pushed to the back burner soon enough," he continues. "Hanging banners on the highway, fixing signage, trimming trees. Then before we know it we'll get next season's salt, and it will be go time again."

Pelissero and Ledgerwood finish on the radio, and Pelissero turns his attention to the mounds of snow in the lot east of the Rozsa Center. "With the storm tomorrow, we'll take what we're dumping here and blow it down the hill toward the water," Pelissero says. "That's about the best we can do with it, get ready for the next load."

They'll use their Snogo on these mounds, one of several pieces of equipment in their garage along the Keweenaw Waterway. Alongside the front-end loaders, the dump trucks, the plows, and the little golf cart-like machine used by the Ice Patrol on the sidewalks (which has a crack in the windshield—it's been a rough winter all around), the Snogo is a sixties-era snowblower on steroids, mounted on a massive front-end loader.

"Those things go forever," Pelissero says. "We'll have to replace some pins, but equipment like this was built to last."

The breeze picks up slightly as Pelissero's Ford Escape bounces down Phoenix Drive to the main garage. There's still a blizzard coming. Is he worried?

"Not really," he says. "I mean, we've got everyone scheduled to come in at four. We'll just get here and get to work. What else can we do?"

"Hey, check this out," Pelissero says, setting the radio down, pointing to the large aerial photo of campus on his wall. "They took this photo some time early in the summer. Take a look at the SDC lot." I look, following the dark streaks on the pavement to the edges. "Those are snow piles. It must have been a snowy one that year."

"It'll be neat," he says, the clock chiming nine, the crew's first break of the day, "to see how far into the spring we have snow." He laughs. "I bet some of the spots will still be there in July." 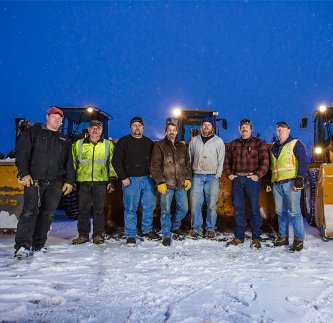 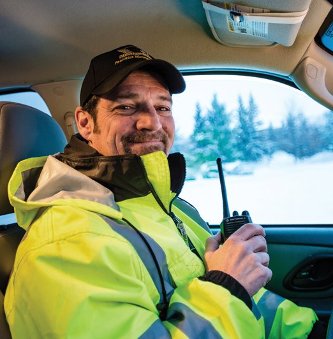 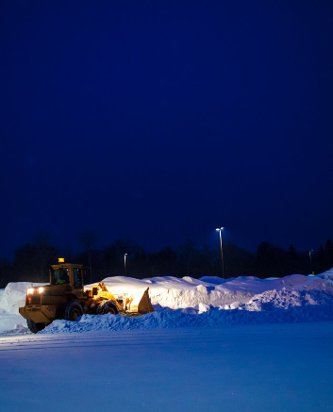 After the main work of clearing walkways and lots is done, the grounds crew piles the plowed snow, making room for the next storm. Pete Pelissero 24 Michigan