A Plague of Fleas

The zooplankton never saw it coming.

Well, perhaps it would be more correct to say that they never smelled it coming.

These tiny, eyeless water creatures recognize predators by their scent, and zooplankton in the Upper Midwest have never added the spiny water flea to their stink list. The results have been catastrophic.

"The word I use is blindsiding," says limnologist W. Charles Kerfoot. "When Bythotrephes longimanus was introduced here from northern Europe thirty years ago, the native species were totally oblivious to it."

They still are, which is why the spiny water flea, aka Bythotrephes (pronounced BITH-oh-TREH-feez) is devouring its way through the Great Lakes and into the surrounding inland waters. It's famous among anglers for forming tangled, sticky gobs on fishing gear and anchor lines, but what's merely a nuisance to people is emerging as the region's next great aquatic calamity. This half-inch-long predator with a spiky tail is on the verge of disrupting an entire ecosystem from the bottom up.

Kerfoot recently completed a three-year study in the region that shows just how widespread these carnivorous crustaceans have become. Since Bythotrephes needs cool conditions, it has not gained a footing in southerly waters. But it is having a field day in a band of lakes stretching from eastern Ontario to northern Minnesota. His group sampled the waters in dozens of sites from New York to northwestern Minnesota; they found eighty-three sites that were infested.

The scientists checked out Lakes Michigan and Superior and many interior lakes and lingered two years in Voyageurs National Park, on Minnesota's border with Canada, to examine Bythotrephes' long-term effect on the native zooplankton. Three of the park's lakes—Rainy, Kabetogama, and Namakan—had significant densities of the spiny water flea. Compared to nearby lakes with little or no Bythotrephes, they had far fewer of the native zooplankton that support a food web topped by pike, bass, walleye—and of course, fishermen.

"Bythotrephes is having as much impact on the plankton communities as quagga mussels have had in Lake Huron and Lake Michigan," said Kerfoot. "We expect it will have cascading effects up to the fish, but right now, we can see a major collapse of the plankton community."

Bythotrephes is no big deal in its native waters. "The zooplankton communities in Scandinavia and northern Europe have adjusted to it," Kerfoot said. "They have evolved together, and the prey species Bythotrephes eats have developed devices to protect themselves, like helmets and spines." North American zooplankton like many Daphnia and Bosmina species, which are favorites on Bythotrephes' menu, have similar hardware but "fail to sense the presence of the exotic and don't deploy the defenses."

Thanks to its own impressive armor—the spiny water flea is mostly long, pokey tail with a three or four barbs sticking out the bottom for good measure—Bythotrephes has also blindsided native fish.

"My students were first to show that the tail barbs protected them against fish. When the fish try to eat them, they get stuck by the barbs," said Kerfoot. "The spine can poke right through the wall of the stomach."

Since it can only live in fresh water, Bythotrephes could never have swum across the Atlantic on its own. "It came in ballast water, no question," Kerfoot said. Like other notorious invasives—including zebra and quagga mussels— it was transplanted by ships loading ballast in one part of the world and dumping it in the Great Lakes.

Ocean-going vessels can't be blamed directly for Bythotrephes in Voyageurs National Park, however.

"It is transported to inland lakes by recreational fishing," said Kerfoot. The spiny water flea's enormous, barbed spine attaches to all types of surfaces— fishing lines, nets, anchor ropes—and unless boats and fishing gear are thoroughly cleaned, they can carry spiny water fleas and their resting eggs between lakes, infecting one after another.

Bythotrephes resting eggs are exceptionally hardy. "We discovered that the eggs are special: big, round, and thick shelled," said Kerfoot. "They go through fish guts intact."

That means that minnows taken from Bythotrephes-infested waters and used for bait elsewhere can poop viable eggs into the new lake.

Right now, there's no way to get Bythotrephes out of infested lakes. But by taking a few simple precautions, boaters and anglers can stop it from spreading. Isle Royale National Park is proof.

The Lake Superior island is one of the few places in the Upper Midwest where Kerfoot's team found no Bythotrephes in inland lakes. There, boaters must disinfect all vessels before putting them in water, and anglers are limited to artificial bait. In addition, motorized craft are banned.

"Once people get behind an effort to stop hitchhikers, it's really effective," Kerfoot said. "People do care. Unfortunately, that doesn't stop the odd Typhoid Mary. In some places along Highway 41 in Michigan's Keweenaw Peninsula, every lake with a boat ramp that we tested had Bythotrephes."

Nevertheless, all the dedicated, responsible fishermen in America can only do so much. The primary highway for invasive aquatic species, the ballast tanks of ocean-going vessels entering the Great Lakes, is still open. Though exotics have been invading the region since the St. Lawrence Seaway opened in 1959, many freighters still release contaminated ballast water into the system.

"They can pick up something in the southern Great Lakes and pollute Thunder Bay or Duluth," said Kerfoot. "We absolutely have to cut that conduit off."

An alien predator only half an inch long, Bythotrephes longimanus proves a spiky mouthful for any fish willing to risk a bite. Photo: U.S. Geological Survey, Department of the Interior/USGS, Kevin Keeler and Lynn Lesko 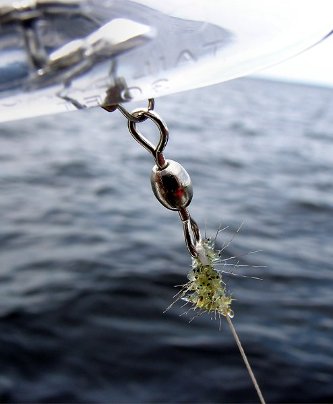 Gobs of spiny water fleas stick to fishing lines and other equipment, then are brought to other lakes and streams by unsuspecting anglers. Photo: Jeff Gunderson 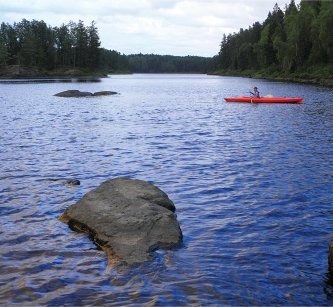 Voyageurs National Park, where the spiny water flea has munched a hole in the food web in at least three lakes. Photo: Thinkstock