A Party for Marvin

A chance encounter with a Doors-loving youth in a Salvadoran village changes three lives forever.

Michigan Tech graduate students Hans Lechner and Emily Gochis were exploring the streets of the tiny, impoverished Salvadoran village of San José las Flores when they heard music booming from a little house. Someone was singing at the top of his lungs—in English.

The Peace Corps Master's International (PCMI) student and his wife couldn't resist checking it out.

That's how they discovered Marvin Rene Huezo Mendoza. The seventeen-year-old was sitting in a room plastered with art, singing along with the Doors. But to greet Lechner and Gochis, he had to crawl across the room.

Marvin was disabled from a bout with polio when he was two. His family couldn't afford crutches, let alone a wheelchair.

The boy was cautiously friendly. His family had supported the leftist Farabundo Marti National Liberation Front rebel forces in El Salvador, and he was suspicious of American policy and interests in his country.

He and Hans had something in common though—a love of music and literature. They began talking about musical groups and found that they both loved the Doors. Marvin started relaxing. Lechner and Gochis learned that the art work on the walls was Marvin's and that he had taught himself to sing in English by listening to American songs.

"I took an immediate liking to him," says Lechner. The PCMI student taught Marvin to play chess, and they spent many happy hours competing for a checkmate. They exchanged music and became good friends.

Marvin's disability had kept him from attending school. A family friend who worked at the local high school started tutoring him and had arranged for someone from the Salvadoran Ministry of Education to come to Marvin's home to give him final exams. Finally, with the help of a church group, Marvin managed to enter high school, and he started looking into colleges on his own. But he was the son of a woodcutter in a remote village. His family could never send him to college. His disability made it impossible for him to do physical labor or work in a factory. His future looked bleak.

Lechner and Gochis's hearts ached for Marvin. "Here was this proud, smart person who had taken the initiative to get himself a high school education, and he couldn't even get around," says Gochis. They knew Marvin should go to college. "He needs an opportunity to use his intellect."

Then they heard about Tony Gasbarro, a returned Peace Corps volunteer and professor emeritus at the University of Alaska Fairbanks. Gasbarro is deeply involved in humanitarian and development work through Project Salvador, a nonprofit that helps needy young people get an education.

Project Salvador agreed to work with the Michigan Tech students to help Marvin achieve his dream of a college education and a fulfilling future.

The first task was making him more mobile. Lechner and Gochis could easily have bought him a pair of crutches, but in keeping with Peace Corps philosophy, they wanted to make Marvin an active participant in his own progress. They suggested that he sell some of his art work to pay for crutches. He agreed, and Marvin's art was eagerly purchased by other Peace Corps volunteers.

Lechner and Gochis's Peace Corps service in El Salvador ended in 2009, and they returned to Houghton. There they started the Marvin Fund, throwing a fundraising party in the fall of 2010. The first Marvin Party attracted about sixty guests. The party has become an annual affair, attracting more than a hundred people last fall.

Admission is free, with a donation requested. Michigan Tech faculty, staff, and students donate music, food, and drink. Lechner and Gochis raffle off Marvin's art work and other Central American arts and crafts. "We're trying to weave some of the Salvadoran culture into the event," Gochis explains.

Many returned Peace Corps volunteers and PCMI students, as well as other graduate students and members of Spanish and Cerveza, Global City, and Engineers Without Borders, have gotten involved. Peterlin Distributing lends a beer trailer. A special treat for those over twenty-one is jello shots. The plastic bags of jello made with vodka are a North American adaptation of a Salvadoran favorite— small plastic bags filled with frozen juice.

"We don't ask for anything; people just volunteer," Lechner says.

The students have raised enough to send Marvin to college in the capital, San Salvador, where he studies business and marketing. It's a forty-five minute bus ride for Marvin, but he doesn't mind. With Lechner and Gochis's help, he has forearm crutches now.

Life is still far from easy. Marvin has undergone more surgeries on his legs. His father has died. He's been robbed on his bus ride to San Salvador.

The $2,000 annual scholarship that sends Marvin to college is paid through Project Salvador directly to the university. That's a big load off Lechner and Gochis's minds, since gang warfare and extortion are rife in El Salvador. This way they know that the money they raise is actually going to pay for Marvin's education.

Lechner and Gochis, both PhD students in geology, haven't seen Marvin since they left in 2009. Lechner returned to El Salvador briefly for field work and took a quick side trip to Marvin's house, but Marvin was working on a mayoral campaign and wasn't there.

They keep in touch by letters and on Facebook. When Marvin graduates, they'd like to bring him to Houghton as guest of honor at his own Marvin Party.

And what does Marvin think about all this?

"My childhood was a constant struggle," he says. "I suffered constant bone fractures caused by my disease. The disease controlled my life. Hospitals were my second home.

"My life took a radical turn when I met my friend, or should I say brother, Hans, and his wife Emily. They are like angels in my life. When Hans told me that there was a way to receive a scholarship, I was very happy. Now I'm in my fourth year of college, thanks to Hans and Emily and all those friends that I don't know who collaborate with their donations. A thousand thanks to everyone for helping me to achieve my dreams."

As for Lechner and Gochis, they're thrilled that the Peace Corps promise that "you are going to change more than the people you help" has proved true. "Marvin has changed us forever," says Gochis. "He is a true friend."

Hans Lechner and Emily Gochis are continuing to raise funds for Marvin's last year of university and his visit to Michigan Tech. A party is planned for the fall. For more information, contact Lechner at hnlechne@mtu.edu. 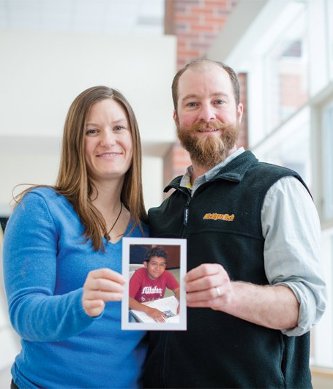 Emily Gochis and Hans Lechner hold a photo of Marvin Rene Huezo Mendoza. With their help and his own hard work, the polio-stricken youth from a poor village in El Salvador is finishing college.