It's a "Tall World" after all

Block by block, a group of Michigan Tech students has laid the foundation for a campus world in Minecraft.

Tall World’s digital semblance of campus is true to life. The Dow is complete with a rooftop greenhouse; a juvenile evergreen tree pokes through a patch of grass, with a sign proclaiming “EERC Tree” nearby; and the Portage Canal borders campus.

When asked how many hours have gone into the project, Ryan Brodowicz ’12, Tall World’s first administrator, answers, “Too many.” He estimates his involvement alone at 200-plus hours.

The project started with several computer networking and system administration majors chatting over the game and deciding to strike out on their own. “The initial rough rendering of the Chem Sci building took almost eight hours,” says Lucas Schill, who is credited with dreaming up Tall World. Since the original building shells were constructed in 2010, about ten other players have joined in the project. “It’s cool to have a 3-D simulation of the place where we spend so much time,” says Ryan Sears. “There’s nothing quite like having a gladiator-style sword fight with your friends on top of the MEEM.”

As the original members graduate, the group is preparing to pass along the Minecraft torches (which, in Minecraft, safeguard Tall World from the monsters that lurk at night). “Hopefully we can get some more people involved to finish the buildings’ interiors,” says Mario Loria. 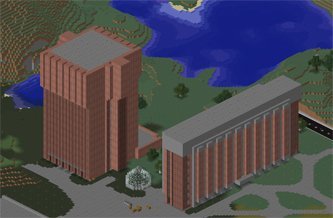 The MEEM and Chem Sci buildings in Minecraft