Each year, students and professionals who work in theatre technology—sound, lighting, costumes, stage effects—gather at the United States Institute for Theatre Technology (USITT) annual conference. Many submit posters about their work. Few are chosen, even fewer by students.

This year, four Michigan Tech students applied, and all four were accepted. They presented their costume designs and stage effects at the USITT Conference in Milwaukee in March, right alongside presenters who have been working in theater for years.

“Each year, there is usually one, maybe two student presentations, ordinarily by graduate students,” says Mary Carol Friedrich, associate professor and director of theatre design and technology programs at Michigan Tech. “That our students, all undergrads, were chosen to present speaks to the strength of the very practical and professionally relevant work they are doing in the degree programs in the visual and performing arts department.”

A bent for swordsmithing

The props-master wanted the murderer to stab his victim right through the chest. Face-on to the audience, with a three-foot sword. The play was a murder mystery, after all. But she had no idea how to stage that bloody effect.

“Hmm,” said Matt Willett, a Michigan Tech theatre technology student who had dabbled in magic when he was in high school and had seen a sword trick or two. “I have an idea.”

So he fiddled with two flexible metal tape measures, cutting them to the right length and sanding them to a point at one end. Then he sanded off the numbers, glued them together, and wrapped them in clear packaging tape. What emerged was a sword blade that looked like solid metal but bent when pressed against something firm—like an actor’s chest.

A costume design student helped Willett fabricate a flexible sleeve made of house siding. The sword slipped from sight into the sleeve—camouflaged by an ornate belt—when the victim was “stabbed,” and voilá: a fatal sword-stabbing on stage.

Willett’s teacher, Assistant Professor Kalen Larson, was so impressed with Willett’s creation that he invited the student to write a paper about it with him.

OMG! From wet head to up-do in five minutes

Elizabeth LaRouche’s poster on hairstyles of the 1940s grew out of a problem she solved during a 2011 production of South Pacific.

As Nellie the nurse sang “I’m Gonna Wash That Man Right Outta My Hair,” the actress actually washed her hair on stage. Problem was, then she had wet hair, and the very next scene called for her long, blonde hair to be tucked up elegantly on her head.

So LaRouche suggested they dry the top layer of hair during the scene change and pin the rest up wet, covered by the dry hair. It worked.

“It was an easy fix for a common problem,” says LaRouche, who is majoring in theatre and entertainment technology major with an emphasis in costume design.

“I did a lot of research on 1940s hairstyles for that show,” she explains. She applied that research to styling wigs for Musical Comedy Murders of 1940, the same show that featured Willett’s sword. It’s that research, along with the wet hair/dry hair trick, that she presented at the USITT conference.

Elizabeth LaRouche, who is from Gaylord, is working as costume shop manager in the Department of Visual and Performing Arts.

Katy Ellenich learned about Elizabethan blackwork embroidery during a costume history class, and she fell in love with the delicate black stitching on white that decorated dresses of that era. “But it takes so long to make,” she says, “and it’s too small to be seen from the stage.”

How could she enlarge the blackwork scrolls and swirls but still have them look authentic? And cut down the tedious handwork of embroidery?

Ellenich, a Calumet native who worked at the Calumet Theatre all through high school, came up with an idea. “Why not use white fabric printed with a black design?” she suggested. “It looks like blackwork, only bigger, so from the stage, it should look just right.”

And so it did. Her poster for the USITT conference compared real blackwork to its cloth cousin. She also brought samples of blackwork and black-work-looking cloth that she had made for conference-goers to see and touch.

Ellenich knew she wanted to study theater when she came to Tech, but sewing had not occurred to her. After she encountered her first sewing machine in a costume construction class, she enjoyed it so much that she decided to pursue a theatre and entertainment technology degree with an emphasis in costume design.

She’s also doing a theatre management concentration, hoping to find a theater job that won’t take her too far from home. “I might consider going as far as Chicago,” she concedes, “at least for a few years. But then I want to come home.”

For Morgan Nelson, it all started with recycled mittens. Once she’d figured out how to sew thick old sweaters into mittens that fit, she moved on to gloves.

“I love gloves,” says Nelson, a third-year costume design student from Cadillac. “I think they are the neatest things ever. They are such an under-appreciated accessory.” And why vintage gloves? “They fascinate me because people don’t wear them anymore.” Nelson has been known to paw through thrift store bins, hoping to unearth a pair dating from the era of seamed stockings and de rigeur hats at church.

When she came to Michigan Tech, Nelson enrolled in general engineering because she enjoyed a machining class in high school. Her introductory courses weren’t a good fit, but then she took a backstage technology class and fell in love. “It was so hands-on, so interesting,” she recalls.

So she switched to theatre technology, but at first she resisted costume design. Nelson’s mother, who quilts for a living, had taught her to sew, and “I loved sewing so much; I didn’t want to ruin my passion,” she explains.

Now she is making vintage gloves for stage use. One challenge is finding ways to machine-sew intricate designs that once were done by hand. Another is finding simple tricks to make gloves look like their antique counterparts—gluing on decals or sparkly beads, for example. “It’s all about what reads from stage,” Nelson says.

Her poster for the USITT conference involved tips and tricks for making vintage-looking gloves quickly and easily. 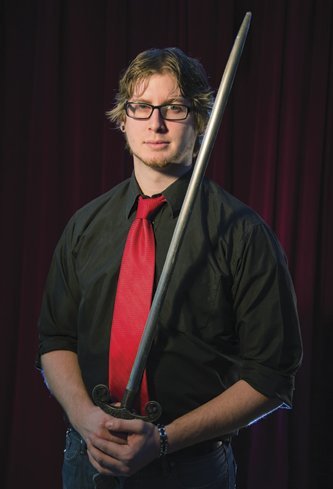 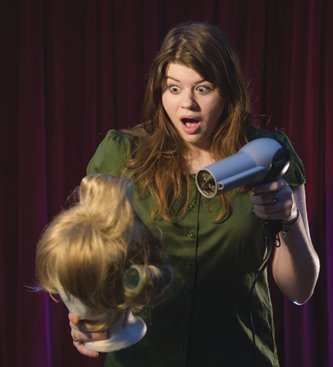 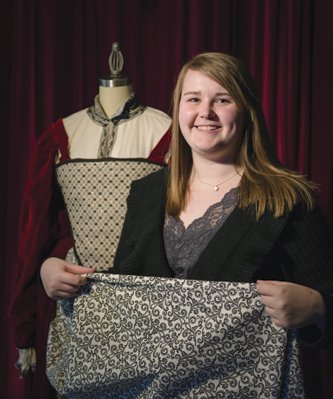 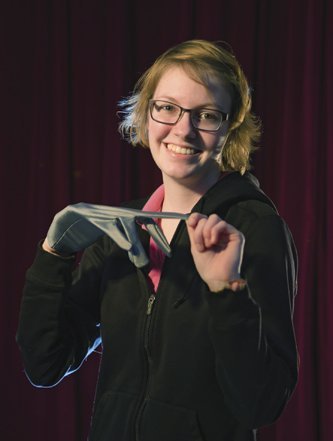