What's up with you? Submit your own class note and photo online at mtu.edu/alumni/connect/networking/ or email us at techfund@mtu.edu.

Walter T. Anderson, former leader of two academic units at Michigan Tech, passed away January 28 at home after a long illness. Anderson, 89, a longtime resident of Woodland Road in Houghton, was living at the Bluffs Senior Community.

He earned BS and MS degrees in Electrical Engineering from Michigan Tech, in 1943 and 1950. During World War II, he worked on the Manhattan Project in Oak Ridge, Tennessee, where scientists enriched uranium that would be used to build an atomic bomb.

He returned to Tech as a member of the electrical engineering faculty in 1954, earning the Distinguished Teaching Award in 1957. In 1970, he was named assistant head of the electrical engineering department and was its acting head in 1972 and in 1979–80. In 1984, Anderson was appointed director of the School of Technology, a position he held until his retirement in 1988.

Anderson was an influential engineering figure statewide and nationally. He served as vice president of the National Council of Engineering Examiners, which honored him with a distinguished service award and an award of merit. He was a member of the Michigan Society of Professional Engineers, which named him Engineer of the Year in 1971 and a fellow in 1994.

He was a lifelong amateur radio operator and was a member and an active participant in the UP Evening Net, having been named “Ham of the Year.”

In 2007, Anderson was honored with the Board of Trustees Silver Medal. He established a scholarship at Michigan Tech for electrical engineering and technology students.

Hinzmann received a master’s degree in education from the University of Michigan before beginning his teaching career at Michigan Tech in 1946. He taught until 1977 and was also the University photographer during his tenure at Tech. He was recalled as a patient, caring teacher who loved the enthusiasm of students. After retirement, he was active in the local Boy Scouts chapter, Isle Royale Natural History Association, and Golden Kiwanis.

Paul is survived by his wife, Elsie (Feigley) Hinzmann and his children, Georgia (Hugh) Makens of Grand Rapids and Vincent (Nancy) Hinzmann of Milford, grandchildren, and other family members.

The following faculty and staff retired from Michigan Tech recently. The years they first came to Tech are listed below.

The Michigan Tech family extends condolences to the relatives and friends of those who have passed away recently.

Ross E. Roeder ’60 (Business Administration), a recipient of Michigan Tech’s Board of Trustees Silver Medal, has been honored with the Spirit of Hope Award for his “selfless dedication to the men and women of the US Coast Guard.”

“Embodying Bob Hope’s legacy of service, Ross Roeder and the Coast Guard Foundation tirelessly supported Coast Guardsmen and their families in a wide variety of ways,” said Admiral Bob Papp, who presented the award at a Pentagon ceremony. “He is very deserving of this prestigious award and I am honored to present it to him.”

Roeder served as board chairman of the Coast Guard Foundation from 2005 to 2011. Under his tenure, the foundation expanded education, support, and relief programs for Coast Guardsmen and their families.

The Spirit of Hope Award recognizes the outstanding service of men and women of the US Armed Forces, entertainers, and other distinguished Americans and organizations whose patriotism and service reflects that of Bob Hope, the award’s namesake. The award is presented annually by the five armed services and the Office of the Secretary of Defense. 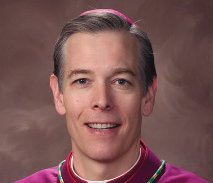 After spending seven years as bishop of the Catholic Diocese of Marquette, the Most Reverend Alexander K. Sample is heading west. In January, the Vatican announced that Pope Benedict XVI appointed him archbishop of Portland in Oregon.

In a prepared statement, Sample said, “Even as there is excitement and joy at taking up this new challenge that God has placed before me, I would be less than honest if I did not say that I will leave the church in the UP with a certain heaviness of heart. I will profoundly miss the people, the clergy, and the religious of the diocese.”

After earning bachelor’s and master’s degrees in metallurgical engineering in 1982 and 1984 from Michigan Tech, Sample completed studies in philosophy at the College of St. Thomas in St. Paul, Minnesota, in 1986. He was ordained a priest in 1990 at St. Peter Cathedral in Marquette and, at age 45, was ordained bishop of Marquette in 2006, making him the youngest bishop in the United States at the time.

Aaron Besmer ’98 (Civil Engineering) was named to the Barrier-Free Design Board. The nine-member board helps the Michigan Department of Licensing and Regulatory Affairs review and process requests for exceptions to barrier-free design specifications. It also makes recommendations for barrier-free design rules. Besmer will serve a three-year term that expires in 2015.

Gerald F. “Jerry” Philo ’80 (Mechanical Engineering), an associate and senior project manager with Harley Ellis Devereaux, has been re-appointed to the Board of Mechanical Rules. The four-year term will end in 2016. The board makes recommendations for mechanical code rules, issues mechanical contractor’s licenses to qualified applicants, and makes orders, rules, and regulations. Philo will represent professional mechanical engineers.

The National Engineers Week Foundation named Tim Juidici, PE, a municipal engineer with Orchard, Hiltz & McCliment, the 2012 American Council of Engineering Companies National Young Professional of the Year. He accepted his award at the ACEC 2012 Fall Conference in Boca Raton, Florida. Juidici earned a BS in Civil Engineering from Michigan Tech. He is based in Livonia, where he has completed several awardwinning municipal projects.

Juidici is active in a variety of societies, including ACEC, the American Public Works Association, and the American Society of Civil Engineers. He also volunteers his time for the Boys/Girls Club of SE Michigan, judges the ASCE steel bridge competition, and is a community cleanup volunteer.