By Stefanie Sidortsova
Share this story:
Virtual reality is often associated with video games, but what if it could be used for productivity apps? With the virtual keyboard developed by Vertanen and Adhikary, travelers can leave their laptops at home and turn the airport into a virtual office.

Reality might leave a lot to the imagination, but researchers at Michigan Tech are filling in the gaps.

While cranking out text is an integral part of our digital lives, it’s a field of research missing in virtual reality (VR) and augmented reality (AR) development. Our computer scientists delve into the different ways to type in VR and AR spaces.

In VR worlds, the user’s environment is entirely simulated, whether it be a video game, military exercise, or flight simulation. AR technology allows people to add digital content to their existing physical environment, from the simple (fun filters on Instagram) to the complex (helping surgeons perform complicated operations).

In both worlds, keyboards come in handy (pun intended). Keith Vertanen, assistant professor of computer science, and doctoral student Jiban Adhikary developed a mid-air virtual keyboard by mounting a hand-tracking device on a VR headset. The device senses the position of both hands and renders them in the virtual world. The user also sees a floating QWERTY keyboard. 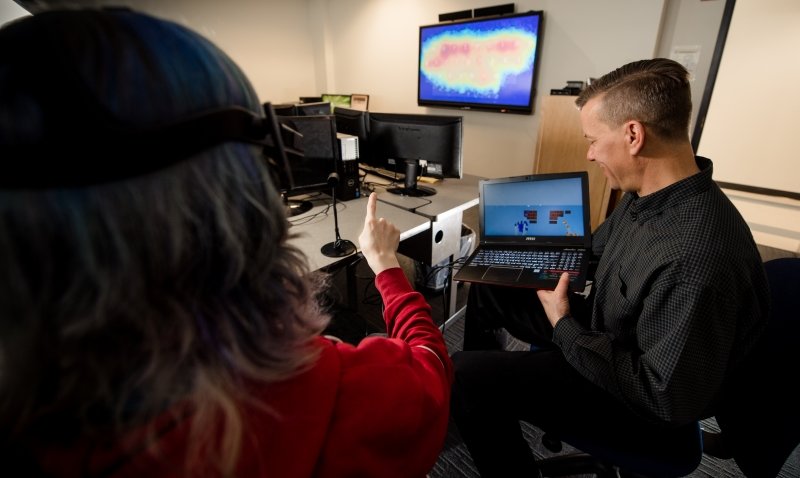 Research from Scott Kuhl, associate professor of computer science, and James Walker, lecturer in computer science, allows the user to work on a physical keyboard while in VR. An image of the keyboard shows what keys have been typed, but the user doesn’t see their hands.

"People underappreciate the redundancy in natural language. Our recognition algorithm, VelociTap, is extremely accurate as it's been trained on billions of words of data."Keith Vertanen

Both programs use a powerful text recognition algorithm, VelociTap. “Think autocorrect on steroids,” Vertanen says. “It can make sense of very ‘noisy’ data, so you don’t have to always hit the correct key.”