By Allison Mills
Share this story:
Physics professor Raymond Shaw is doing the next generation of cloud research with the help of graduate student Susanne Glienke--and holographic imaging.

In clouds, the nitty-gritty details are in droplets. Specifically, sorting out how droplets mix has been a challenge. Now, using holographic images, our researchers have a clearer idea.

To understand groups of droplets, physics and atmospheric science professor Raymond Shaw has worked with a team from the National Center for Atmospheric Research (NCAR) for more than a decade. In their latest experiments, they flew airplanes through fluffy, cottonball cumulus clouds and captured detailed 3-D images of cloud samples with an instrument called the Holographic Detector for Clouds (HOLODEC—yes, like Star Trek’s "holodeck").

Using the HOLODEC, Shaw and his team found that as dry air mingles with droplet-rich clouds, the mixing is inhomogeneous. With sharp boundaries between dry and wet air, it looks like marbled cake, a pattern that held true down to the centimeter- scale. Currently, most climate and weather models assume homogeneous mixing, more like well-stirred cake batter. This new data could help bring more nuances into modeling, weather forecasting, and climate predictions. The results of Shaw and his team’s HOLODEC work were published in Science last October.

"In its simplest form, the HOLODEC is a camera that can record a 3-D picture. It allows us to record the size, shape, and position of everything within a volume just a touch larger than your pinky finger."

Like its Star Trek Enterprise counterpart, the HOLODEC is not much without its flying vessel. In this case, the HOLODEC was carried on a Lockheed C-130 airplane, a military transport-style aircraft, maintained by NCAR and owned and supported by the National Science Foundation (NSF), along with the University of Wyoming King Air Research Aircraft, also supported by NSF.

The research was really a team effort. In addition to the collaboration with NCAR, two members of Shaw’s team are Tech alumni—and have been involved with the HOLODEC research since its inception. Matt Beals (now at MIT Lincoln Laboratory) and Jacob Fugal (now at University of Mainz in Germany) are also the first and second authors on the Science paper, respectively. Michigan Tech’s science and technology writer, Allison Mills, interviewed both of them about their research and HOLODEC.

AM: You both have been with the HOLODEC project since your time at Michigan Tech. What has that been like?

JF: Helping build the prototype HOLODEC in 2003 and figuring out how to process the holograms was my PhD project. For this first instrument, it was a big deal that we could see the droplets and ice crystals at all. In 2008– 09, Matt and I were part of building and developing the HOLODEC instrument used for this latest research. We’ve seen small-scale processes of clouds in play. It’s amazing to see our measurement quality advance so far, so quickly.

MB: I started my PhD at Michigan Tech right when the instrument was undergoing final design and construction at NCAR in Boulder, Colorado, where Jacob was at the time. I spent the first six months of my time at Michigan Tech on a visiting scientist fellowship in Boulder, so that I could be part of this initial building and testing phases. Being a part of the development on so many different levels—from engineering to software design to mission scientist—was a real challenge but also a really rewarding experience...To know that all the hard work paid off, and that we now can look at clouds in a brand new way has been exciting.

AM: For most of us, we hear "holodeck" and our imaginations go wild. What exactly does the HOLODEC do and why does that matter for studying clouds?

MB: In its simplest form, the HOLODEC is a camera that can record a 3-D picture. It allows us to record the size, shape, and position of everything within a volume just a touch larger than your pinky finger. The instrument is mounted to an airplane that is then flown through clouds in order to capture 3-D pictures of the tiny water droplets and ice crystals contained within. The details of these drops and ice crystals—how many there are, how large they are, how they are distributed through the volume, etc.—drastically affect the nature of the cloud and how it interacts with the environment. Some of the largest uncertainties in current climate models stem from uncertainties in cloud composition and behavior at these small scales.

AM: That small-scale behavior has been a bit of a mystery for the past 30 years since inhomogeneous cloud mixing was first introduced. Could you explain the mixing patterns observed with the HOLODEC?

JF: Let’s step back for a minute. One part of scientific discovery is some luck, some fortunate circumstance. Most people I introduce our instrument to already grasp that holography has a three-dimensional aspect to it; we can see a 3-D piece of cloud. Well, what could one do with 3-D measurements that others haven’t done or aren’t doing already? We were looking through the data, and Matt showed me this figure of filaments of cloud strewn through dry air: After checking it wasn’t a mistake or artifact, we knew we could see the mixing at cloud edges on the centimeter-scale. We weren’t expecting the results to be so dramatic, or that this particular science question would be the one that we’d focus on first.

AM: Why is observing inhomogeneous mixing such an important finding?

JF: There is growing evidence that cloud processes at small scales and at cloud edges, particularly in stratocumulus and cumulus clouds, are important to overall cloud development such as rain-out [when particles and gases are removed by rain droplets] and cloud growth. This is the first of many findings, we hope, on how cloud-edge processes appear, and how they may impact the overall cloud.

AM: So, what’s on the horizon for this HOLODEC research?

MB: We collected a ton of data, and only a small fraction has been processed and analyzed for my thesis. So, there is definite potential to at least continue on with the mixing work I was doing. Also, we started exploring how to make the instrument more accessible to the research community as a whole. Hopefully, we’ll start to see holographic cloud data being used in a wider variety of studies by other groups.

On top of that, both Jacob and Raymond have active projects using holographic instruments similar to the HOLODEC. Jacob is working with another aircraft-mounted instrument (HOLODEC, the next generation if you will) as well as some pretty interesting ground-based instruments he’s using to study clouds and ice in the mountains. Raymond is also using a HOLODEC-like instrument to help analyze cloud formation in his new cloud simulation chamber.

Do clouds mix evenly? Or do they separate out? That has been the subject of research spanning more than three decades. Now, HOLODEC lets us peer at the ingredients close up and observe their distinct patterns. 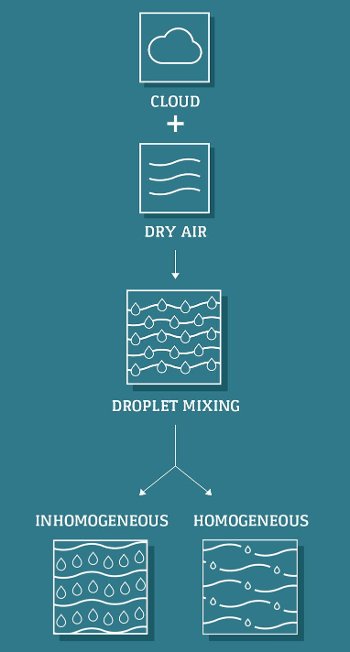 Like a marbled cake, this kind of mixing separates into layers of dry air and big, unaltered drops. Whole droplets evaporate while others are untouched.

Eroded, smaller droplets are blended like cake batter. They’re smaller because all are losing some moisture and there is less dry air to go around.