Mascots Through the Ages

Before Blizzard T. Husky, there was the Bear. And the Mouse.

Ever since we've been the Huskies, there have been husky mascots. They've been carved in snow, and real dogs have roamed the sidelines of athletic events for years. So, too, has a student or two dressed as a dog (or something vaguely resembling a dog).

The earliest recorded human mascot we discovered goes back to the late 1960s and early 1970s. Looking more Yogi Bear than a Siberian husky, he had a female co-mascot in white "fur."

"We embellished my costume with goalie shin pads painted in gold and black saying 'Go Tech,'" says Bill Wassberg '71. "A goalie blocker, stick, and glove rounded out my outfit. For [wife] Kathy, we found a clown costume pattern and made the body out of fluffy white material and added a tail. Neither of us was a proficient skater."

Laura Reeve '80 wore a different version of Yogi. "I would do a strip act when the band played the stripper song. I threw the bra into the crowd and was really surprised on graduation day to see it hanging from someone's rearview mirror!"

Next came the "Bear." He or she was too stout and fuzzy of face to be taken seriously as a husky, but, when it was replaced, cheers of "Where's the Bear?" were heard at athletic events.

"I was the Husky dog in the Tech Centennial parade," recalls Monica Rovano. "I remember having a lot of fun with the kids, and I really wanted to be the 'walking' dog because I'm not a skater. I remember being very warm in that costume."

"When he [a 1980s classmate] became the mascot, his mom sent up a care package complete with a new collar and 'rabies certificate,'" said Dee Sweet '89.

"Bob Olson [radio voice of the Huskies] and I hired a woman to make the suit," said Don Kilpela Sr. "The band ridiculed it by calling it a mouse. It was a terrible suit. I can't remember how long we used it, but it was too long. The current one is perfect."

Today's mascot looks more like the real thing. He can be seen high fiving young and old at many sporting events and graces t-shirts with his always-happy mug.

In 1997, a contest was held to name him, with Blizzard winning out over Harley, Heikki, Howie, and Yoopie. Should you be wondering, his middle name is "The."

Wherever he goes, he attracts attention. In 2010, Blizzard T. Husky traveled to Cape Canaveral, in Florida, in hopes of seeing one of the last space shuttle launches, and ended up starring in Space.com's story "Attempted Shuttle Launch Attracts Billionaire, Google... and a Mystery Man in a Dog Suit?"

People can't seem to get enough of him. "The men's basketball team made it to the NCAA playoffs in Missouri [spring 2014]," says a current, anonymous Blizzard. "I went with the Pep Band. We won the first game, and there was a St. Patrick's Day parade that night. I was handed a set of cymbals to play, with the paws. We hitched a ride on a trailer ahead of us; so, I was riding a jet ski in a parade while playing cymbals. What other mascot has done that?" 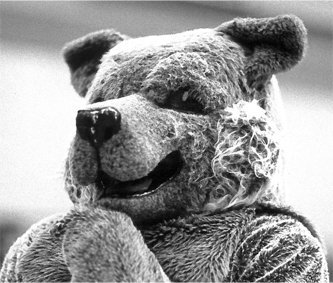 Michigan Tech's mascot from the 1970s 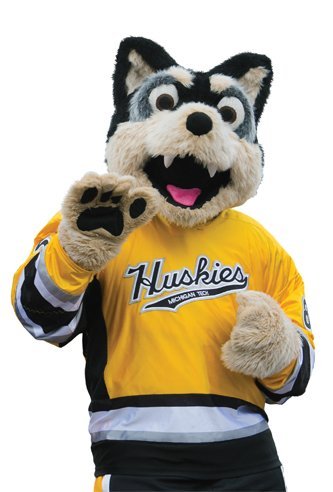