A Cop in the Halls

"Come on," he says, adjusting the volume on his police radio, the voice of the dispatcher fading out. He looks the student opposite him straight in the eye. "You can't seriously believe that." The student is taken aback, opening his mouth to say something, then closing it again.

"There's no way the PS4 is better than the Xbox One. I mean, look at the games that are out for the Xbox!"

It's an early dinner in the Wadsworth dining hall, and Public Safety Officer Reid DeVoge is sitting among students, more than keeping up with the talk of video games. "I got the Wii U for my kids," he explains later. "It is a lot of fun. Don't tell these guys that, though: hardcore gamers would never admit it."

Heading out from dinner, he stops a half dozen times to greet students, making small talk on topics ranging from mountain biking to Johnny Manziel's NFL draft status. He is obviously well liked. "Officer DeVoge is an extremely awesome man," said one student. "He is approachable and relatable, and he really cares about the residents and wants to get to know them. Plus, he has a gun and will be useful in the event of a zombie apocalypse."

A few years ago, such an endorsement would have been unheard of. "The only time the police were in the halls was when something criminal was happening," says DeVoge. "It was a bit of us versus them. We weren't a part of the community."

The new program has made all the difference, says housing director Travis Pierce. "Since Officer DeVoge has been here, students don't fear the police. Instead, they invite them in to play video games, sit down and have a meal, or attend a student program," he said. "Walking through the buildings with him is like walking with a rock star."

DeVoge moved into an apartment in McNair Hall in May 2012. During his first year on the job, the number of reported crimes dropped 19 percent, and student conduct violations—often involving drugs and alcohol—fell 25 percent. All this, and warmer, fuzzier feelings as well: a survey of students showed that 90 percent felt that the program provided a positive police presence, not to mention protection from zombies.

All this good news has drawn attention from other universities interested in developing their own residential officer programs, says Chief of Police Dan Bennett. So far as he knows, Michigan Tech is the first school in the country to actually assign an officer to live in the residence halls.

"We thought the program might be successful," says Bennett. "But we had no idea it would be this successful."

A few hours before the dinnertime Xbox versus PS4 debate, DeVoge began his shift, walking from his apartment in McNair Hall to the Public Safety Office and checking in shortly before 2 p.m. "Are you in, Reid?" asks the dispatcher.

He heads for his office in Wadsworth Hall, saying hello to the office staff and bantering for a few minutes. During his office hours, many of the RAs come by to talk, which he encourages. "It's those unofficial relationships, the rapport that builds trust in us." He has more time for conversations on Wednesdays: on Tuesdays and Thursdays he teaches an afternoon women's self-defense class. "I love teaching that class. I love having a chance to help out like that."

A third-year student fulfilling a class assignment comes by to interview DeVoge about his position and Public Safety's work in the residence halls. The questions center on policies and procedures in the halls and Public Safety's role. DeVoge tells him ResLife handles most disciplinary issues, just as they always have.

"We don't do checks with beer-sniffing dogs."

The interview winds up, but the chat with the student continues. "Have any classes left today?" he asks. "Are they going all right?"

Later, in the patrol car, DeVoge shares his insights on the residential officer program, which has roots going back decades, to the days when cops walked a beat.

"Policing has changed so much over the last century," he says. "Back before World War II, officers literally walked the neighborhood. They didn't have radios or phones or anything. They'd ask a resident if they could use their house phone to check in with the station."

The drive around campus is calm in the late afternoon. Reid waves to other drivers and pedestrians. "Then with cars and later radios, officers could respond a lot faster to incidents. The flip side to that is that we aren't seen in the community as much. We aren't as approachable."

As if to emphasize the point, he pulls to a stop at McNair Hall. "Let's take a walk through, see how everyone's doing."

Walking along, he continues. "This is what we need to get back to doing. This is why we have the residential officer program. It's really important that everyone knows we're a part of this community and we're here to help."

That plays out in subtle ways. Students rarely report criminal activity—nobody wants to be a snitch. But sometimes they come to DeVoge when they are worried about a friend's drug use, or underage drinking, and he gives them strategies to address the problem. "I'm not here to get people in trouble," he says. "But if they need advice on how to handle something, I can help."

A student is working out in the weight room. DeVoge goes to enter, but the door is locked. "Ah well," he shrugs. "I was going to give him some grief, tell him we got a report of a couple of guns in this room." He flexes his arms.

We stop by the ResLife office in McNair on our way out: DeVoge wants to know when one of the staff members wants to hit the bike trails again.

"When there's not a foot of snow on the trails!"

Back in the car, DeVoge explains that his bike isn't just for fun or exercise. "It's a better way to patrol, where I'm accessible, I can talk with people. And I get to know the trails really well. If there's an accident, I know how to guide the first responders there."

It's 7 p.m., the campus settling into an evening rhythm. He pulls into the parking lot next to the Alumni House.

"There are probably half a dozen or so things going on any given night," he says. "I know Friday there will be a bunch. Film Board has a movie—I wonder what they'll be showing this week."

The sun is still up, the car warming, the windows down a bit. DeVoge stirs.

"I'll swing by everything Friday night, see if they need anything," he says. "The biggest thing I want them to know is that I'm there if they need something." 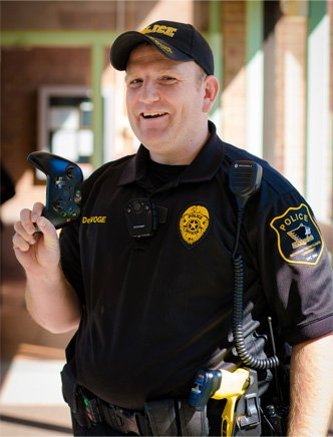 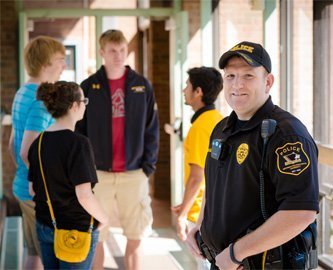 Officer Reid DeVoge lives in McNair Hall, just a few paces away from hundreds of students. "I'm not here to get people in trouble," he says. "But if they need advice on how to handle something, I can help."
Photo:Sarah Bird