Alumni Association Award Winners: A Legacy of Success and Dedication

Jillian Rothe has established a sterling career at Caterpillar in a short period of time, using her mechanical engineering and business administration degrees with a minor in Spanish. She's also given her time and talents to many worthwhile causes over the years.

She is currently Caterpillar's energy and transportation marketing support representative for Asia Pacific based in Singapore. Within this newly created role, she ensures that business partners have the Extended Protection Products to support their go-to-market strategies. Rothe has held increasingly responsible management roles in Peoria, Illinois; Monterrey, Mexico; Minneapolis; and Nashville.

Outside of her job duties, she has been involved in the Caterpillar Latino Connection Leadership Team, Women's Leadership Forum, Military Support Network, Asia Synergy Network, Caterpillar Young Professionals, Women's Initiative Network, Cat LAMBDA (LGBTA Group), and the Nashville Chapter of Girls on the Run. She is also a 70.3 Ironman triathlete, an independent marketing executive for Melaleuca, The Wellness Company, and is part of the Michigan Tech Technical Marketing Recruiting Team and Society of Women Engineers.

Marie Cleveland is a worldwide account manager for FedEx, responsible for bringing in $70 million in revenue annually. While she advanced through management positions, she received many honors from the company, including membership in the President's Club, FedEx's highest sales award; and the Five-Star Award, FedEx's highest accolade.

She's traveled the globe for FedEx, touching down in Europe, Asia, Africa, and South America, making her an expert in cultural issues within international business. Prior to FedEx, Marie was involved in various positions in quality, human resources, and sales for Roadway Package System, which was purchased by FedEx in 2000.

For her alma mater, Marie is a member of President Glenn Mroz's Advancement Council, the School of Business and Economics Advisory Board, the Presidential Council of Alumnae, and the McNair Society. She also assists the University with student recruitment and hosts numerous alumni events in the Chicago area.

Marie enjoys visiting Michigan Tech as a guest speaker, sharing her many insights.

George Robinson and his wife, Susan, have been synonymous with Michigan Tech's A. E. Seaman Mineral Museum for nearly two decades, George as curator and Susan as honorary curator. Together, they elevated it to international status.

George also taught mineralogy and conducted research in mineralogy, characterization of new mineral species, and mineral occurrences. He wrote an extensive update to E. W. Heinrich's Mineralogy of Michigan and coauthored the books Lake Superior Iron Ranges with Gene LaBerge and The A. E. Seaman Mineral Museum with Robert Rann. In 2012, a mineral discovered in the Mammoth-St. Anthony mine in Arizona was named in his honor: georgerobinsonite.

Susan is a highly regarded mineral and wildlife artist who volunteered hundreds of hours at the museum. In addition to giving artistic flair to the arrangement of mineral specimens and displays, she helped with the packing and moving of all the specimens from the old location to the new building— all ten semitrailer loads.

Martha Sloan's impact on people on and off campus has been monumental. She was a pioneer in many aspects of her career and has always had time to help anyone who asked.

As a role model and mentor, she has supported women faculty members and women of all walks of life across campus and around the globe. She was honored with Michigan Tech's Distinguished Service Award, receiving nominations from six departments and two colleges. It is safe to say that Martha Sloan has changed the face of Michigan Tech and engineering education.

Throughout his career, Tom Irwin has used his Michigan Tech degrees to the utmost. He believes luck is preparation and opportunity and "Michigan Tech excelled at the preparation, academically and in a very congenial environment."

During Tom's years as president of Hodgkiss and Douma (H&D) Construction Company of Petoskey, H&D's emphasis was highway construction, major recreation projects, developments, and aggregate production. His twenty-seven-year career at H&D began after working with Sivier Construction in Detroit, D&L Contracting in Traverse City, and Dow Chemical in Midland.

His dedication to Michigan Tech runs long and deep, as evidenced by his receiving the University's Outstanding Service Award in 1999. He served on several committees and initiatives of the Department of Civil and Environmental Engineering, including the Executive Council, the Partnering with the Future Campaign, the Executive Committee of the Educating Graduates of Choice Campaign, the Professional Advisory Committee, and the Transportation Enterprise Program. In addition, he has been a key contact between the Department of Civil and Environmental Engineering and the pavement industry for many years.

Tom is past president of the Michigan Road Builders Association and the Michigan Asphalt Paving Association. He has also served as director of The Bank of Northern Michigan and as a trustee of both the Charlevoix County Community Foundation and McLaren Northern Michigan Hospital. Most recently, Tom served on the steering committee for the successful Generations of Discovery Campaign for Michigan Tech. 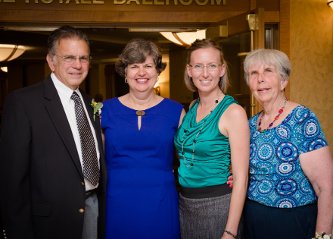 Know a great Michigan Tech alumnus/a or friend of the University? Here's your chance to give them the recognition they deserve.

The Alumni Association is seeking nominations for the 2015 Alumni Awards:

These awards are presented each August at the Alumni Reunion.

Award descriptions and nomination forms are available at http://alumni.mtu.edu/awards or by contacting the Office of Alumni Relations, 906-487-2400, 877-688-2586, or alumni@mtu.edu. The deadline to nominate is December 1.