There were some arched eyebrows when Michigan Tech announced the goal for Generations of Discovery: The Campaign for Michigan Tech, back in 2006.

We asked three of the principals what it was like trying to raise $200 million. President Glenn Mroz, Vice President for Advancement Shea McGrew, and George Butvilas, who chairs the Michigan Tech Fund Board of Trustees, agreed to talk with us.

Here are some extracts from their chat over coffee in the library café.

How did it all start?

George: It was a manifestation of the strategic plan, which calls for making the University more research oriented. The reasoning is that the best faculty are committed to doing research, and if you don't have top-notch faculty, you won't attract great students.

Shea: Ultimately, the campaign was more about people and less about bricks and mortar. We realized that it would be transformational—endowed chairs are a whole new thing here. We needed to tell people that the University was morphing into something different from when most of our alumni were undergraduates. So we wrote a white paper and went around the country inviting people to talk about it.

Glenn: The white paper wasn't set in stone. Shea and I would be rewriting it between meetings with alumni. We knew that if we couldn't convince our alumni that this was the right way to go, we wouldn't be successful.

What was the response from alumni?

Shea: Frankly, I was surprised at how well this message went over with the bulk of the people.

Glenn: We took some arrows, though, from people who thought we were undermining the undergraduate mission of the University. They took some convincing that we were building on Michigan Tech, not diminishing anything. When people saw that students were getting jobs, even in a bad economy, they realized that Michigan Tech still had the right stuff.

I was at an alumni event in Boston, where we were talking about some of the new degrees, and the sound design program was coming on board. I remember taking a lot of flack from people saying, what are we doing messing around with sound design, who could ever be interested in that? It was really heating up, until one of our alums in the back of the room spoke up and said, "I work for Bose, and we care about sound design an awful lot." I love that guy.

Give some examples of how giving has made Michigan Tech a better university.

Glenn: We heard from faculty that having the endowed chair allows them to do things they wouldn't be able to do any other way, riskier things. People appreciate being able to push the boundaries.

Shea: We often have students who may not be able to come back because they don't have enough money. I asked Ron Pasquinelli '59 if he'd help save some kids. I still remember sitting in his living room in Monterey and hearing him say, "I'll do it, if you'll promise to let me know when they graduate." Later [financial aid director] Bill Roberts brought one of Ron's scholarship recipients into his office, and we called Ron. She just sat there and told her story. It was hard luck for her family, but she was doing really well at Tech, and the next day she brought a whole bunch of chocolate chip cookies into Bill's office, she was so appreciative.

Glenn: Frank Pavlis '38 grew up on a farm back in the day, and his parents decided he would be the one to go to school. He went on to be wildly successful with Air Products. I asked him, "What if Michigan Tech students could have the same opportunity for global travel that you had?" The next thing we knew, Frank sent us a handwritten proposal for a gift that led to the Pavlis Center. Now Frank's gift is touching people's lives around the world.

Public universities are relying more on private giving. How does that change the institution?

Shea: It has many manifestations. There's the expectation that deans and department chairs will raise money. They aren't just academic administrators anymore. We are all in this together, and if we don't get support, it will affect how we operate. Private giving will be the lifeblood of the University for the future. I can't count all the meetings I'm in where "Can we raise the money?" comes up, because people know it's probably not coming from within the University.

Glenn: If you take the appropriation from the state and subtract faculty salaries—not even benefits—you get a negative number. When Ray Smith was president [1965–79], we got 76-80 percent of the budget from the state.

The rest came from tuition, auxiliaries, and things like that. Now we are at 16 percent. There's a tremendous need for outside support, much like a private university.

What was it like when the economy went down the drain?

George: Our timing was not impeccable. We had a year and a half, two years, of a hard pull. We knew we would get a lot of no's, but we maintained contact, and eventually people started to give again. They demonstrated a loyalty that few colleges and universities enjoy.

Shea: The second half of '09 and '10 were just awful, and even in 2011, people were still traumatized. That was during the time of talks with Dick '48 and Liz Henes. Dick was convinced that we needed to bring in great mathematicians, and that led to an endowed professorship. He knew we were going to get through this.

Shea: Through this campaign, so many people have come to see Michigan Tech as a place of consequence. You look at how many graduates get jobs, you talk to folks in industry who say they hire Michigan Tech grads before they hire anyone else. People are beginning to understand that Michigan Tech is more than you realize. There are a lot of wows going on.

Glenn: One time, we were telling a donor about the students her scholarship supports, and she said, "You tell them I think of every one of them as my grandchild." And we did.

The campaign has been like a hand across generations, from alumni to current students, saying, "I made it at Michigan Tech, and you can make it too. I'm extending my hand to pull you through." 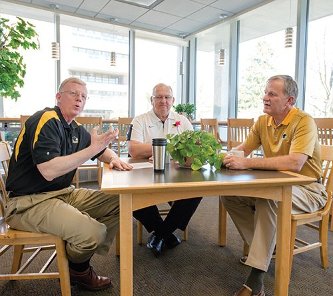 "Through this campaign, so many people have come to see Michigan Tech as a place of consequence," says Vice President for Advancement Shea McGrew, left, during a conversation with Tech Fund Chair George Butvilas, center, and President Glenn Mroz. 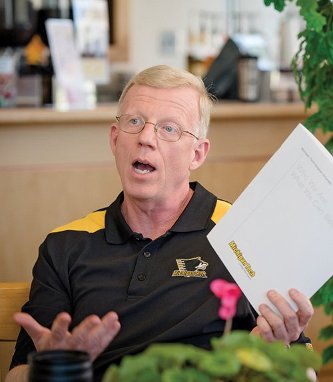 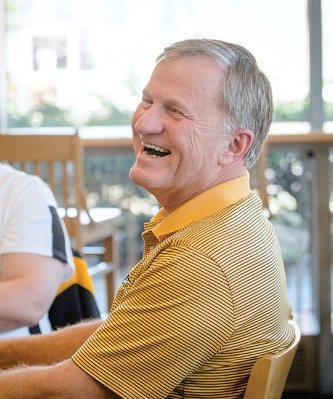