Eco-tourists are lined up on a roadside in Yellowstone National Park’s Lamar Canyon to witness two wolf packs jockeying for territory, and wildlife biologist Doug Smith ’88 is nearby with a TV crew shooting footage of the predator that has captivated mankind for eons.

It’s been seventeen years since Smith helped launch the effort to restore wolves to the 2 million-acre park. Today, an estimated ninety-eight wolves in ten packs thrive in Yellowstone. On this crisp February morning, the lanky Smith, dressed in his green wool Park Service uniform with a pair of Nikon binoculars dangling from his neck, talks about how wolves have reacted to the decline in the park’s elk herd, their prime prey.

“The wolves and elk are coming into equilibrium as the park’s getting restored to its natural condition,” says Smith, 51, project leader of the Yellowstone Gray Wolf Restoration Project. “Initially, we had an overpopulation of elk and a surplus of food for the wolves. We now have a leaner, meaner elk herd, and the wolves are having a harder time of it.”

Wolves were eradicated from the park, and much of the West, in the early twentieth century. The restoration of wolves to Yellowstone is viewed by wildlife experts as one of America’s greatest successes in wildlife management, with the gray wolf off the endangered species list and the Yellowstone ecosystem more like it was before Europeans settled the continent five centuries ago.

Smith’s success, however, has run up against virulent anti-wolf sentiment throughout the West, which remains a potent force in policy debates on the state and federal levels. Smith often speaks at community meetings and addresses the deep-seated antipathy many have toward the predator, which has a history of occasionally killing cattle and sheep. Smith counters with scientific studies that show that wolves rarely dine on domesticated animals.

“It can be exceedingly unpleasant,” says Smith. “They tell me I’ve ruined their lives, and I get the feeling that they hate me. It’s a true clash of values. And the most frustrating thing is that facts don’t seem to matter.”

Smith gets to know the wolves up close and in person when he goes out to collar them as part of the Yellowstone research team’s study. The radio transmitter collars, which last about three years, provide extensive data on wolves’ natural lives in the park.

But collaring a wolf is not for the faint-hearted.

To do so, Smith, who has handled and collared more than 400 wolves, goes up with a pilot in a helicopter, strapped in a harness, with the door off, aiming a rifle loaded with tranquilizing darts. They’ll spot a pack and fly in low to chase the wolves, which can run 35 miles an hour.

“They juke and jive to avoid us,” says Smith. “Some will stop dead in their tracks to avoid us as we fly over. The females are the hardest to catch. They are faster than the males. It can be very hard to re-collar. There was one female I couldn’t get for two years. But we finally collared her in the third year. She was getting old.”

Smith, who lives in Bozeman, Montana, with his wife, Christine, and sons, Hawken, 6, and Sawyer, 8, says studying wolves for so long has also taught him about child rearing. Wolves, he says, are infinitely patient with the pups, tending to their every need and never reprimanding them.

Smith’s fascination with all things wild dates back to his own childhood in northeastern Ohio, where his parents ran a summer camp with 100 horses. In high school he discovered his love for wolves while volunteering in a Purdue University study of captive wolves in northern Indiana. He helped raise four pups, caring for them around the clock—feeding, cleaning up, even sleeping with them.

Peterson recalls receiving a letter from Smith, then a high school student, looking for an internship. Smith was hired as a research assistant and joined Peterson on the Lake Superior island, where scientists have been studying the relationship between wolves and moose since 1958.

Smith headed to the University of Idaho for his undergraduate studies, but over the next fifteen years he returned annually to Isle Royale, leading several weeklong backpacking trips with volunteers collecting evidence in the wolf-moose study. And he returned to Michigan Tech to earn a master’s degree in biological sciences under Peterson’s instruction, focusing his research on the beavers of Voyageurs National Park, in Minnesota.

Smith and Peterson still keep in touch, both on their research and the politics swirling around it.

“Doug has done an outstanding job in a very difficult position,” says Peterson. “He has to deal with the bureaucracy of Yellowstone, which is huge, and deal with the external influence, which is negative, while keeping the science going at a time of funding challenges.”

In Smith’s office, located in a building that once housed the military on America’s western frontier, you catch a glimpse of his ongoing connection to Michigan Tech. On the wall behind his desk, a poster celebrating the fiftieth anniversary of the Isle Royale study hangs next to a map of Yellowstone marked up with boundaries of the territories controlled by each of the packs. A pair of cross-country skis stands in one corner, and a wolf skull from No. 27—the Yellowstone wolves get numbers, not names—reminds him of the incorrigible female who was killed by authorities after she’d wandered outside the park a second time and killed several sheep. On the bookshelf is a copy of his gripping 2005 book, Decade of the Wolf: Returning the Wild to Yellowstone.

Still, Smith is a wildlife biologist, and he’d rather be out of doors. He savors those days on his horse, Joker, riding up into Yellowstone’s Mirror Plateau, where elk and bison roam and wolves may be lurking.

“There are no trails, it’s just wild country, but Joker knows the way,” says Smith. “We’ve ridden there so many times.”

“You develop an emotional connection with the wolves out there,” he says. “It’s seductive. They draw you in. They are the pure definition of wildness.” 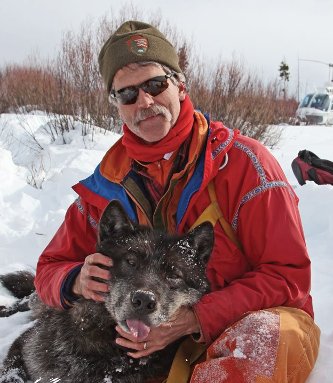 Doug Smith cradles Ms. 478F, the alpha female of Yellowstone National Park's Cougar Creek Pack. The wolves are tranquilized and then collared to track their movements. Photo by Dan Stahler/NPS 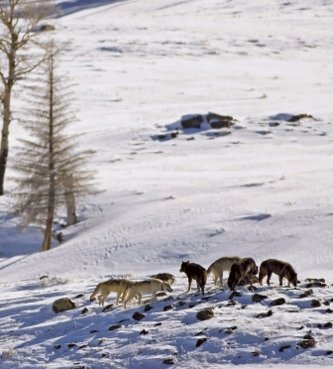 Members of the Druid Wolf Pack gather on a wind-blown outcrop of rock in Yellowstone's Lamar Valley.