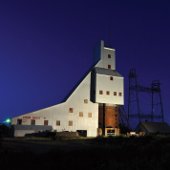 The Quincy Mine, in Hancock

“It’s not your grandfather’s mining anymore,” says Wayne Pennington, chair of geological and mining engineering and sciences. “Mining today is so different, and this new program will be tailored to that.”

“It’s part of our heritage, and it’s part of the future, too,” added Leonard Bohmann, associate dean of engineering. “There’s a definite need for mining engineers, now and into the future. We are positioned where we can help fill that need.” 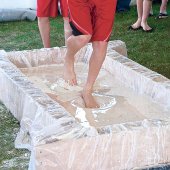 During a Mind Trekkers exhibit, students fool around with oobleck, a mix of cornstarch and water that acts like both a liquid and a solid.

Children visiting the Michigan Tech Mind Trekkers exhibit at the second USA Science & Engineering Festival at the Washington Convention Center could hurl a ping pong ball right through a soda can—learning for themselves the physics of air pressure.

An offshoot of Michigan Tech’s Pre-College Outreach program, Mind Trekkers has grown into a thriving venture. Student volunteers have taken the road show all over the country. Director Steve Patchin estimates that so far, hundreds of thousands of school children and parents have been captivated by the Mind Trekkers’ science spectacular. 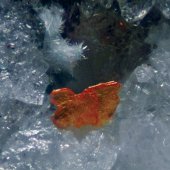 A new mineral discovered in Arizona has been named georgerobinsonite—after George W. Robinson, professor of mineralogy and curator of Michigan Tech’s Seaman Mineral Museum. It is a lead chromate—a salt of chromic acid—that occurs as minute, transparent, orange-red crystals on cerussite, another lead carbonate and secondary lead mineral.

What did Robinson do to earn such an honor? Well, he didn’t discover the mineral. It is a convention in the profession not to name new minerals for their discoverers, said Frank Hawthorne of the University of Manitoba, who was involved in georgerobinsonite’s discovery. They decided to name it for Robinson because “George is a prominent curator who has contributed a lot to the mineral community,” Hawthorne said. 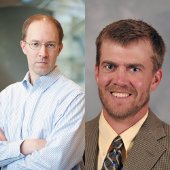 Will Cantrell (left) and Roger Woods

“Office hours” are an elastic concept for both of Michigan Tech’s 2012 Distinguished Teaching Award winners: Will Cantrell, an associate professor of physics, and Roger Woods, a lecturer in the School of Business and Economics. “I’m on IM from 8 to 10 p.m.,” Woods said. “That’s when my students are doing homework. When they get stuck, I help them get unstuck.”

His students wrote, “He never lets a student fall behind if the student is putting their 100 percent effort into the course”; and “He is the BEST teacher that I have ever had, period.” As for Cantrell, “His office is always open,” says physics department chair Ravi Pandey. “I’ve seen him here on Saturday and Sunday working with students.”

Students appreciate Cantrell’s dedication. Said one, “He demonstrates the quality of a teacher who cares about his students and the subject and goes above and beyond that to help us. He is ALWAYS willing to help explain things outside of class.” 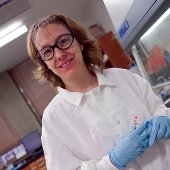 Nominators cited Minerick’s numerous innovations, including a combined undergraduate and graduate class, with differing expectations based on the students’ grade level. Such forward thinking has allowed her “to re-energize our core graduate program courses,” wrote one nominator.

Archaeologist, chemical engineer unite in a war on rust

Rust is the bane of industrial archaeologists, who can only watch in dismay as iron artifacts dissolve into flaky red nothingness. With funding from the National Park Service, archaeologist Tim Scarlett and chemical engineering professor Gerard Canaba are investigating two new rust-prevention strategies: using highly pressurized carbon dioxide to displace water in iron artifacts’ pores and fissures; and impregnating objects with a coating of benign polymers that would prevent the absorption of water.

A matter of degree(s)

The PhD in Biochemistry and Molecular Biology is an interdepartmental program that builds on courses in the Departments of Biological Sciences and Chemistry and the School of Forest Resources and Environmental Science.

The MS degrees in Biomedical Engineering and Medical Informatics address advanced technology needs in the field of medicine.

And Michigan Tech and Central Michigan University are partnering to offer CMU’s PhD in Physical Therapy program at Michigan Tech in the near future. The program will help meet a critical need for physical therapists in the Upper Peninsula.

Michigan Tech geologist Greg Waite and graduate students Josh Richardson and Kathleen McKee volunteered to help find out what the heck was going on. They traveled south to install four seismometers and eight sound sensors around town, just in time to record a small earthquake on March 29.

For Clintonville, it was a remarkable moment. As of April 26, reporters noted that a few “I Survived the 1.5” T-shirts were still for sale at City Hall and Clintonville businesses. 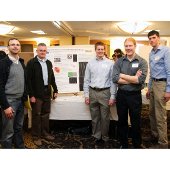 Taking first place in the Senior Design category was the project “Bioabsorbable Polymer-Coated Metal Stent Degradation Simulation Design.” The students devised a better way to check for the degrading of stents, which are inserted into arteries to help maintain blood flow.

First place in the Enterprise category went to ITOxygen, which is involved in software development for a number of customers, including Blue Sky Health in Houghton and CCI Systems of Iron Mountain.

Tech played its first game at the Student Ice Arena on January 14, 1972, and forty years later, the hockey rink got a new ice plant, the system and equipment needed to make and keep ice. The $1.2 million project replaces the original Freon 22 direct system with a more environmentally friendly, industry-standard ammonia brine indirect system.

After demolishing the old system (the Freon was reclaimed), the arena floor was fitted with heating piping to prevent permafrost followed by a layer of sand and a layer of foam insulation. The web of pipes for refrigeration lies above the insulation, with a new six-inch-thick concrete slab on top.

An estimated 13 miles of piping snake under the 302 cubic yards of concrete that filled the 200-by-85-foot ice arena floor.

The new plant made ice during the last week of July, a week ahead of schedule. 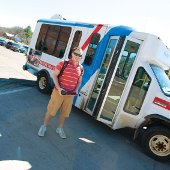 Shawn Wiegand, a member of the team developing a model bus system for Houghton-Hancock

A better way to bus

Students in two Enterprises are designing a bus system that they hope will really work for Houghton, Hancock, and the University community—especially its students. Each city already has its own bus system, but they operate independently.

The Transportation Enterprise is determining where people need to go around town and when they need to be there, with the goal of developing the most convenient routes and schedules.

The Automotive Computing Enterprise has developed an Android app that will let riders pinpoint where a bus is on the route. A similar app for iPhones is under construction. The students also envision kiosks at bus stops, where information would be available via liquid crystal displays.

The effort is supported by a $50,000 Ford College Community Challenge grant. 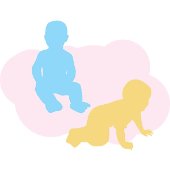 A lactation room for nursing mothers was established on the second floor of the Hamar House, the former home of Counseling Services. It joins similar facilities in the Administration Building, the Electrical Energy Resources Center, and the Great Lakes Research Center.

And, postdoctoral fellows who give birth to or adopt a child are eligible for six weeks of paid maternity leave.