They use what?” Stacey Frankenstein-Markon gasped. A graduate student in Michigan Tech’s Peace Corps Master’s International program in applied science education, she had just arrived in Uganda as a Peace Corps volunteer. And she’d just found out that girls in her African village of Bukedea used rags, old socks, or wads of newspaper to do the job of sanitary napkins.

Frankenstein-Markon soon understood why access to pads was an impossible dream for most girls, who come from families of subsistence farmers making about a dollar a day in disposable income.

“Disposable pads cost a dollar for an eight-pack,” explains the Peace Corps volunteer, who is now back at Michigan Tech completing her master’s degree. “The average family in Uganda has 7.2 children. If just three of those children are daughters who are menstruating, that family would have to spend 20 percent of its income just on pads. Who can afford that?”

Good “feminine protection” is more than a matter of convenience. In Uganda (as in the United States), menstruation is a taboo topic, and Frankenstein-Markon learned that girls in Bukedea feared they might stain their clothes and be badgered by boys. The potential for embarrassment was so great that girls often didn’t go to school while they were on their period. Eventually, they would fall so far behind that they had to drop out.

Then Frankenstein-Markon stumbled upon an innovation developed by a previous Peace Corps volunteer. Since that discovery, she has helped hundreds of girls practice better hygiene while they learned about menstruation, their bodies, and women’s health. And not incidentally, stay in school.

That invention was RUMPS (Re-Useable Menstrual Pads). These hand-sewn cloth envelopes can hold any absorbent material, such as a folded washcloth. They have straps that function like the “wings” on conventional pads, except they are held in place with buttons instead of adhesive. Cleanup is a snap. Soaking RUMPS in water for a half hour or so gets rid of most of the menstrual fluid. Then all they require is a quick hand wash in soapy water and a rinse before hanging on the line to dry. One RUMP costs about twenty-five cents and can last for months. Frankenstein-Markon taught girls to sew locally available material into RUMPS, but before they started stitching, they learned about puberty, sex, pregnancy, and sexually transmitted diseases. She and her community partners answered questions and encouraged honest discussion about matters most of the girls had never considered mentioning in public.

“I cut out 3,600 RUMPS pads myself,” says Frankenstein-Markon. “I spent 180 hours using scissors, bandaged six blisters, and swept up more tiny bits of towel fluff than I ever imagined could exist.”

With the help of three Ugandan partners, Frankenstein-Markon reached more than 1,800 girls, women, and men. And yes, men did attend the RUMPS sessions, although they were sometimes shy about speaking up.

Frankenstein-Markon recalls one man whispering, “Madam, how can I ask you about sex when my niece is in the audience?” And most Ugandans do not want their children to hear about family planning, she says.

But, she adds, “for every five shy Ugandans, there was always one courageous woman who says, ‘Ladies, let’s talk about the clitoris.’ Then another would say, ‘Madam, I want to use family planning. What can I do?’ People want this information, and we helped them get it.”

Every community she visited reacted positively, the Peace Corps volunteer says. “In Uganda today, people are trying to overcome traditional taboos. I found that talking about menstrual health opened the door for other, deeper topics. I started by talking about body changes. Then I moved on to how a woman becomes pregnant.”

Frankenstein-Markon’s work has not gone unrecognized. For International Women’s Day 2012, the Peace Corps in Uganda nominated her for her efforts to “empower girls.” She was one of three field workers from Africa recognized by the Peace Corps worldwide.

Now that the graduate student’s Peace Corps service is over, her community partners are carrying on the work. One of them has applied for a grant to expand RUMPS to fifty more Ugandan schools. Word is spreading, and other Peace Corps volunteers are starting RUMPS projects in their communities.

While she was in Uganda, Frankenstein-Markon worked with an HIV/AIDS-positive support group, and she would like to see the RUMPS program expanded to serve the large numbers of such women in Uganda.

“The RUMPS project helps families save money, and those savings can be especially beneficial to HIV/AIDS-positive families,” she explains. “Families can use that money to focus on good nutrition, taking their medication, and preventing deadly infections like typhoid.”

In essence, as women take control over their periods, everyone begins to take charge of their lives.

“The Ugandans have a phrase for it,” she says. “‘Live positively.’” 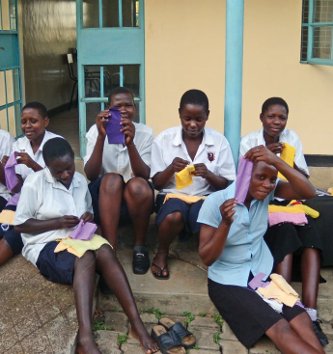 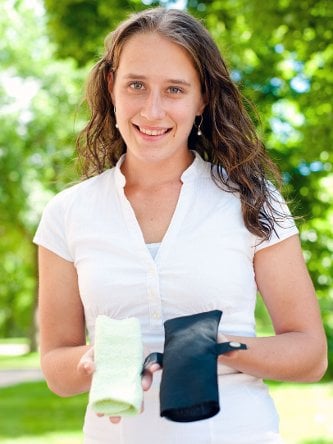