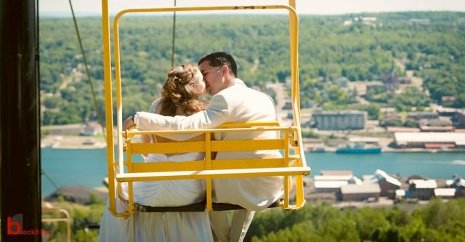 Rachel Boone and Daniel Rosenberg ’09 were married atop Michigan Tech’s Mont Ripley Ski Hill in an uplifting ceremony on June 30. Photo by Brockit

Charles Robert “Bob” Baillod, 71, a pioneer in the field of environmental engineering, passed away April 12. He came to the University in 1968 and led the Department of Civil and Environmental Engineering from 1991 to 2005. Baillod was a powerful advocate, said friend and colleague Professor Neil Hutzler. “He fought hard for the department,” Hutzler said. “He was always thinking about what would benefit the department and the University.”

Baillod’s research focused on water and wastewater engineering, with an emphasis on biological wastewater treatment. Throughout his career, he guided more than fifty students to graduate degrees. Among them was John Sandell ’86 ’92 ’95. “He was my advisor,” said Sandell, now an associate professor of chemical engineering. “Bob was a true professional with the kindest heart.”

Donna Michalek, 49, passed away on April 26 after a battle with cancer. She joined the faculty in 1993 and held numerous positions, including associate chair in mechanical engineering and assistant provost. In 2010, she left Michigan Tech for Mount Union University, where she was the founding member and chair of the Department of Engineering.

“Donna’s practical, straightforward approach to just about everything was so refreshing,” said President Glenn Mroz. “She said what she meant, and she meant what she said, which made her a joy to work with. She also laid the foundation for our accreditation effort, which was a huge task.”

A recipient of Michigan Tech’s Distinguished Teaching Award, the ASEE Dow Outstanding New Faculty Award, and the SAE Ralph R. Teetor Educational Award, Michalek served as a National Science Foundation panel reviewer. She worked tirelessly with the engineering sorority as a mentor and advisor, and the women’s basketball team came to rely on her homemade cookies.

A scholarship has been established in Donna’s memory. To give online, go to www.mtu.edu/donna-michalek-scholarship. You may also call the Michigan Tech Fund at 906-487-2310 or toll free at 877-386-3688 to give by credit card. Or you may mail a check to the Michigan Tech Fund, Michigan Technological University, 1400 Townsend Dr., Houghton, MI 49931-1295 noting that it supports the Donna Michalek Memorial Scholarship.

The following faculty and staff retired from Michigan Tech this year. The years they first came to Michigan Tech are listed below.

Donald C. Larson ’60 was incorrectly included in “In Memoriam” in the Spring 2012 Michigan Tech Magazine. We apologize to Donald and his family for the error.

William Schmiege ’80 has been elected to a two-year term as chairman of Americas Aerospace Quality Group. The AAQG is a cooperative organization of aerospace companies within the Americas working to establish common practices in quality systems, share best practices, and improve quality, delivery, and cost performance.

Schmiege, group vice president of integrity for the California-based firm Parker Aerospace, has been active in the nonprofit AAQG for five years and most recently served as vice chairman. He intends to focus on quality planning in product and business processes and noted that some of AAQG’s “how to” best practices have been adopted at Parker.

Schmiege joined Parker Aerospace in 1986. He has been involved with product development, customer service, project management, quality assurance, lean manufacturing, and operations effectiveness. He earned a BS degree in Metallurgy at Michigan Tech and an MS in Leadership at Central Michigan University. 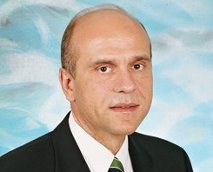 Constantinos A. Balaras ’84 has been installed as vice president of ASHRAE.

ASHRAE is a building technology society with more than 50,000 members worldwide that focuses on building systems, energy efficiency, indoor air quality, refrigeration, and sustainability within the industry.

Balaras is the research director at the Institute for Environmental Research and Sustainable Development at the National Observatory of Athens, Greece. He is serving his second term as ASHRAE vice president and is chair of the Handbook Subcommittee of Technical Committee 6.7, Solar Energy Utilization, newsletter editor, and chair of the Publicity Committee and the Historical Committee of the Hellenic Chapter.