Design hits the dirt (and snow)

It’s ten o’clock in the morning under a gray February sky, and forty-eight baja cars are roaring southward on Third Street, toward the Lake Linden village campground. It’s the start of the twelfth running of the Winter Baja, hosted by Michigan Tech’s Blizzard Baja Enterprise.

These are baja cars as the Society of Automotive Engineers (SAE) defines them: “off-road vehicles that will survive the severe punishment of rough terrain.” Here in Lake Linden, about ten miles northeast of Michigan Tech, rough terrain takes the form of ice-slicked turns and jumps built from snow. Winter Baja is a frozen dress rehearsal for SAE’s international baja competitions.

Blizzard Baja team members helped Lake Linden’s Department of Public Works design and build this course, which winds a circuitous route through the village’s park and campground. Students and locals alike are out to watch baja cars catch air on the snow jumps and rub tires around the turns.

In the field are three generations of Tech’s baja cars: No. 73 (the oldest, nicknamed Red Car), No. 43 (East Car), and No. 50 (Widow). These cars from Tech’s previous campaigns represent evolutionary steps toward Daytona, the car Blizzard Baja is building for the official 2012 Baja SAE races.

Part of the SAE’s Collegiate Design Series, the Baja SAE competition simulates the process of developing a vehicle for factory production. It gives students a chance to apply their classroom skills to a real-world project. Thirty Blizzard Baja team members are working on Daytona. Most are mechanical engineering majors, but business and mechanical engineering technology are also represented.

In the machine shop on the ground floor of Tech’s Minerals and Materials Engineering Building, mechanical engineering senior Scott Rhudy explained some of the finer points of Daytona’s drivetrain. As Blizzard Baja’s drivetrain team leader, Rhudy designed Daytona’s shining aluminum gearbox and oversaw development of the clutch and other components.

“It was pretty much a clean slate,” he said. “We did a lot of work to determine the bearing loads and the gear tooth loads. And that determined the size of the box.”

The new gearbox is compact and lighter than its predecessor. It arrived at Tech as a solid block of aluminum; all the machining, with the exception of cutting the gear teeth, was done by Tech students. This brings up a point about Tech’s baja cars: they are pretty much built from scratch. Off-the-shelf parts include tires, shock absorbers, and not a lot else.

During Winter Baja’s morning session, the course eats up the cars. Thirteen are in the pits, including Tech’s No. 73; mechanical engineering senior Kyle Broetzmann is working furiously on the carburetor. From time to time, additional vehicles are towed in. One has mangled its rear suspension on some harsh jumps near the village baseball field. On those same jumps, the Virginia Tech car shatters its right front wheel.

Considerations of repairability inspired Tech’s design, including a modular front end for Daytona’s tube-steel frame that can be replaced during a relatively short pit stop.

“The front end of our car can take a lot of abuse, and in the past we’ve actually bashed in tubes that we’ve had to cut and re-weld,” team president Bret Schulte said. “During a race, we do not have that kind of time.”

Midway through the afternoon endurance race, 73 is running smoothly. Broetzmann has spent the last two hours disassembling, cleaning, and rebuilding its carburetor at least a dozen times, his dedication to the task born from the fact the engine problems were cutting into teammates’ time behind the wheel.

“You got guys who worked all season long on all the cars, including the new one, and they deserve to get their time in driving just as much as I do,” he says.

Because the chance to drive the cars at speed is one of the rewards of the Blizzard Baja Enterprise. One major reason Tech hosts Winter Baja is to give all the schools’ team members a few golden minutes in the drivers’ seats of cars they spend countless hours designing and building.

The other is to put designs through real-world paces in advance of the SAE’s official race series.

“We got our testing done,” mechanical engineering junior Nathan Koetsier says after the race. “We know what went wrong and what didn’t go wrong, so we can apply that knowledge to the new car.”

Blizzard Baja finished the 2012 Winter Baja seventh in a field of sixteen. Later in the year, Daytona saw warm-weather action at the SAE Baja international competition in Wisconsin, where the team placed eighth among the ninety-five entries. 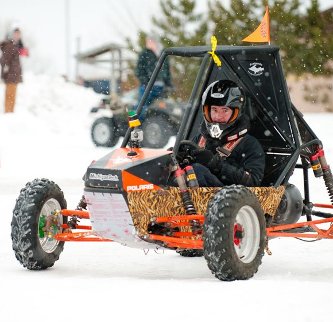 Student Adam King in a peaceful moment before jetting out to the fun house ride that is Winter Baja. 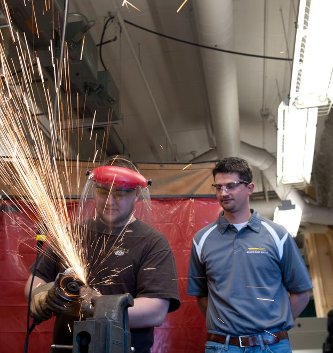 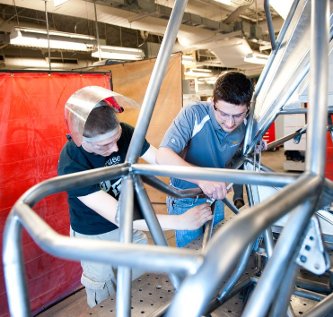 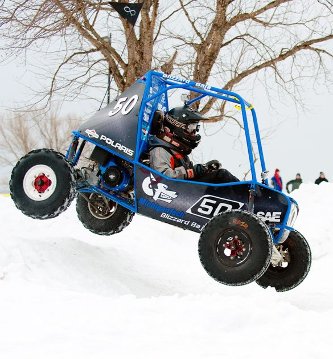 No. 50, also known as Widow, gets airborne during Winter Baja, courtesy of driver Eric VanDrie.