From email to Excel, Tech students and faculty are prepping seniors for the digital age

Seventy-eight-year-old Fritz Ahola hunches over his laptop. “What’s on the list today?” asks Charles Wallace, an associate professor of computer science. “The wife wants to know how to save these files to a disc,” Ahola answers. “And, how do we get this picture on my desktop to print?”

You’d think that would be easy, but it isn’t, Wallace tells Ahola. “This is actually one of the harder things to do.” Then they get down to the business of doing it.

Ahola and a half dozen other people, most of them senior citizens, are here in the Portage Lake District Library on this sunny April day to learn how to use computers. The classes are the brainchild of Wallace, who started the program in October 2011.

Some, like Ahola, have brought their own laptops. Others use the library’s computers. They all have come to get their heads around this brave new technology that has come so naturally to their children and grandchildren—but all too often leaves them spinning in its wake.

Donald Janovsky, a retired construction worker, is learning how to access the Internet. And as he methodically follows his tutor’s instructions, it becomes evident that a process many of us take for granted is about as intuitive as quantum mechanics. “If you don’t see what you want on your desktop, go to the ‘Start’ box,” Carole Noonan advises him. “See? Firefox is in there.” Oh! says Janovsky.

He has no trouble following directions, however, and launches Firefox cleanly. Then he goes to the Google search page, where the reason for his visit becomes clear. “I want to find some exercises to help with my sciatica,” he tells Noonan.

A few tables over, computer science undergraduate Jeanette Head is going over the finer points of dragging, dropping, copying, and pasting with Harvey Filppula, 75. Then they turn their attention to his Facebook page. “We can update your status,” she says. “Do you know what that means?”

“I know nothing,” Filppula states flatly. Shortly, however, he has indeed updated his status and is showing off a picture of himself with his granddaughter.

“I really appreciate Tech doing this kind of program, that’s free and easy, to help those of us who haven’t grown up with computers,” he says.

Janice Peterson, 84, has been coming to the classes since they began. She can also check out pictures of her grandkids, thanks to the library’s computers and her new-found expertise. “These classes are so helpful,” she says.

They grew from earlier workshops Wallace held at a local assisted-living facility.

“It was fun at The Bluffs, and I wanted to open the class up to a wider group. I was also aware that there were a lot of people in the area who need this kind of help,” he says. “They need a computer to keep in touch with their family, because that’s how younger people keep in touch with each other now. But it’s not that easy for the grandparents.”

Wallace started the service because he recognized a need, but he continues it for other reasons. “It’s the most fun I have,” he says. “It’s the highlight of my week.” It's been so fun that he’s teaching others to do what he does in a new graduate course, Software and Senior Citizens.

Randy Harrison, a graduate student in rhetoric and technical communication, also enjoys tutoring. “Computing is not intuitive,” he says. “It’s a literacy that these people don’t have. But I know what it feels like not to understand: they are to computers like I am to cars, so that helps me be compassionate. Plus, they are patient with us, too, and never demanding.”

Bob Veeser, 86, is working with Wallace to iron out some problems with an Excel spreadsheet. “I’ve been coming here since it started,” he says. “I didn’t know anything about computers, and I was looking for a class. I’ve learned quite a bit.”

Veeser’s success is typical, says Chris Alquist, director of the Portage Lake District Library. “They are such eager learners,” she says.

Janovsky, who picked up some pointers on managing his sciatica, is among them. “I like to learn about this new knowledge,” he says. “I don’t know if I’ll ever get it, but I’ll keep trying.” 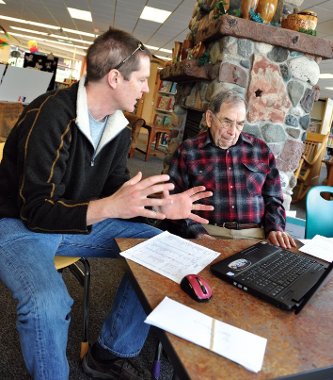 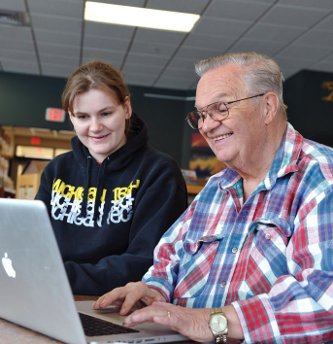 Harvey Filppula gets a lesson in Facebook from computer science undergrad Jeanette Head.

It’s great to work with a tutor at the Portage Lake District Library. But what if you (or someone you love) are having a cut-and-paste emergency at 11:30 on a Saturday night? Here are a few places you can go for help.

Tech Support Care Package
Using this Google site, Michigan Tech students send video “tech support care packages” to their elders that help with many computing tasks, from changing your wallpaper to making a phone call from your computer. And, ahem, there’s no law against sending a video to yourself.