Forged in Stone and Fire

By Kelley Christensen
Share this story:
The orange line is the current interpretation of the Keweenaw Fault location. Based on Graff and Tyrrell’s observations and analysis, the fault appears to be a system of splay faults (shown here by dotted lines) rather than a single thrust fault. This may indicate the termination of the fault at the eastern end of the Peninsula. Image Credit: Landsat satellite image of Keweenaw Peninsula provided by DigitalGlobe, a Maxar company.

The Keweenaw Fault runs like the spine of an ancient creature of rock and fire through the center of the rugged Keweenaw Peninsula. On the northwestern side of the fault are the Portage Lake Volcanics—stone forged in a primordial environment of heat and pressure below Earth's surface—while Jacobsville Sandstone predominates on the southeastern side, its characteristic red and white streaks derived from iron-rich sediments deposited nearly a billion years ago.

A fault is a break in the Earth's crust, and on either side, the rocks have moved past each other. The Keweenaw thrust fault was active more than 900 million years ago and last slipped after the Jacobsville Sandstone had been deposited. Despite the presence of the fault, the Keweenaw does not experience earthquakes. The fault's pulverizing movement is but a memory, forged into the contact of volcanic rock and sandstone. Without the fault, viridescent forests, plunging waterfalls, and placid inland lakes of the Keweenaw wouldn't exist.

Arguably, neither would Michigan Tech.

The fault is partly responsible for bringing to the surface the rich copper deposits that fueled the economic engine of the region for decades. Michigan Technological University was founded in 1885 as the Michigan Mining School to train mining engineers.

Several years before the University's founding, the Keweenaw Fault was mapped on horseback and by canoe, to aid the mining industry in locating profitable deposits. The fault was mapped again in the 1920s, and by the US Geological Survey (USGS) in the 1950s. It is being mapped again, this time by using modern GPS technology and venturing offshore to map underwater.

But the mining boom that began in the 1840s and interest in the fault are but newer manifestations of longtime interest in the area's natural resources; Native Americans used copper in many ways: crafting tools, projectiles, beads, and fishhooks, and trading the copper itself, which has been found thousands of miles away.

The Geometry of Stone

Jim DeGraff '75 '76, research geologist, and Colin Tyrrell, a master's student in geology, are in the process of mapping a portion of the approximately 200-mile-long fault. The two geologists, often accompanied by undergraduate Graham Hubbell and incoming graduate student Daniel Lizzadro-McPherson, have trekked across heavily wooded terrain in addition to mapping the fault where it plunges into the cold waters of Lake Superior.

"We've identified five areas of high priority where we can observe contacts between Jacobsville Sandstone and the Portage Lake volcanic deposits," DeGraff says.

On land, mapping involves walking the fault line, taking strike and dip measurements, and standing very still, so a backpack-sized device called a Trimble can communicate with satellites to put a point into a database with a description of the rock at a specific point. Using handheld magnifying lenses, DeGraff and Tyrrell make careful notes in water-resistant notebooks—for example, "light reddish-orange, poorly sorted sandstone, containing large basalt clasts"—while noting the tilt (dip) and direction (strike) of the rock layers.

"Rock layers, when deposited, are nearly horizontal," DeGraff explained one day in October last year, under the swaying boughs of pine trees clinging to the Bete Grise shoreline. Rock outcroppings the size of automobiles punctuated the autumn landscape. DeGraff's group planned to map offshore, but large whitecapped waves prevented the activity. The sound of crashing waves couldn't smother the tap-tap-tapping sound of rock hammers and jokes about DeGraff's propensity to lose his.

"Tectonic forces twist and distort the geometry of the rocks. There's close to a 90-degree rotation in the younger rocks along the lake, which get older as one moves toward the Keweenaw fault. The collision of tectonic plates was the force that pushed the rocks to tilt," DeGraff says.

Here Be Dragons: Mapping the Unknown

Tyrrell, a diving enthusiast and US Navy veteran, puts his expertise to use to chart underwater portions of the fault—which previous charting attempts guessed at—on the map.

"We're going offshore because, as you can see from this map, previous geologists made a dashed line— there's some unknowns as far as the fault's actual location," Tyrrell says. "This will increase the confidence of the map. We're swimming down, identifying both types of rock on either side."

The team utilizes a differential GPS unit that uses satellite signals and a reference signal from the US Coast Guard to map points with a final accuracy of one meter horizontally and vertically. This year, the team plans to use the Great Lakes Research Center's autonomous underwater vehicle to trace the fault farther underwater.

Mapping the fault line again, which is partly funded by the USGS Educational Mapping Program, is about more than creating the map itself.

"It may have impact on movement of groundwater, where mineralization occurs. It could impact mining exploration in the future," DeGraff says. "It's interesting how the current landscape is tied to significant tectonic events from the past." 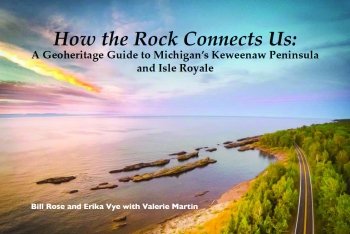 It's pretty enough to display on your coffee table. But it isn't meant to stay there. How the Rock Connects Us, by Bill Rose and Erika Vye with Valerie Martin, takes users deep into a landscape formed by an ancient magma ocean and massive glaciers, and found only on Michigan's Keweenaw Peninsula and Isle Royale.

Rose, a Michigan Tech professor emeritus and volcanologist, and Vye, who earned her PhD in geology at the University in 2016, share a passion for geoheritage and Earth science communication. They collaborated with longtime National Park Service interpreter Valerie Martin, who's been telling Isle Royale's story for 18 years. If you can take a guided tour with any of these educators, you should. In the meantime, self-guidance is made easy thanks to QR codes and a comprehensive web-link list directing DIY geoexplorers to maps, and other trip-planning resources for day trips or longer explorations of the geosites associated with five major geo-element categories: Lavas and the Rift; Red Sediments; The Keweenaw Fault; Glaciers; and The Big Lake.

Questions, geological to philosophical, add another layer of interactivity to the guidebook. Why does US-41 run at an angle through Calumet? What do Keweenaw's Brockway Mountain and California's Death Valley have in common? How does the Keweenaw inspire you?

Lavish with color photos and graphic explainers, the 60-page, 6-by-9-inch coil-bound guide published by Isle Royale & Keweenaw Parks Association (IRKPA) is available through the association for $9.95.