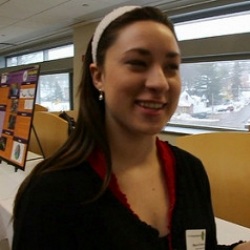 The personal ultraviolet radiation (UVR) dosimeter is a single-use, disposable device. It indicates when the user has received the maximum suggested dose of UVR before an erythemal response, a minimal erythemal dose (MED). The device is a one square cm adhesive patch composed of polysulfone film over a smiley-face graphic. Polysulfone is a polymer that changes its optical density when it is exposed to UVR. The shade of the smiley-face graphic corresponds to that of the
polysulfone after it has been exposed to one MED. When the graphic is no longer visible, the user should get out of the sun.

There are currently 1.5 million walker users in the United States, and this number will rise as the average age of our population increases. Concerns with the safety of walkers have arisen with an observed increase in the likelihood of falling, especially at night. Our goal is to develop a new
walker that is both customizable for a particular user and safer and easier to use, compared to
current market walkers. 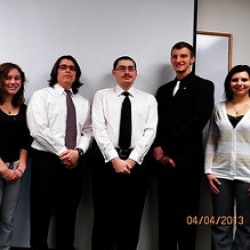 This project improves upon a previously designed hospital sound-level alarm system. The improved device will be implemented at Portage Health in Hancock. Clinical trials were conducted on the newly redesigned sound-level alarm system. The device will alert hospital staff and visitors when their noise exceeds a certain level and interferes with patient rehabilitation. The redesign improves upon the original external housing of the device, the data storage, and the wiring design. A wireless system was added to the device as suggested by the Portage Health staff. 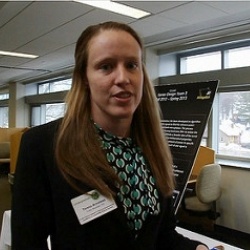 Boston Scientific's Cardiac Rhythm Management Group expressed a desire to have an implantable device that can measure loading conditions, which affect implantable cardioverter defibrillators (ICDs). The goal was to create a force sensor that could be implanted in vivo to satisfy Boston Scientific's
needs. 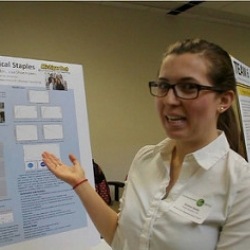 A bioabsorbable magnesium surgical staple may retain high mechanical strength and harmlessly disappear after natural wound healing. We will design a magnesium staple that is able to support the same loads as a titanium staple with a customizable diameter and maintain structural integrity for the duration of tissue wound healing. This new staple would be a strong, rapidly deployable closure device that does not require a second procedure to remove, as well as closing the structural integrity and bioabsorbability gap between polymer sutures and permanent staples.