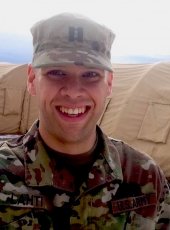 Captain Nathan M. Lahti entered the United States Army in 2003 enlisting into the Michigan National Guard as a 12B Combat Engineer with Calumet MI's 107th Engineer A Company. Shortly after in late 2004 through 2005 he deployed in support of Operation Iraqi Freedom attached to Iowa's 224 Engineer Battalion as a member of an Assault and Obstacle (A&O) platoon. He spent the majority that deployment in Anbar Province and helped to support Iraq's first democratic elections.

In 2010, he received a direct commission as a second lieutenant in the Army Nurse Corps. He was assigned to Joint Base Lewis-McChord (JBLM), Washington’s Madigan Army Medical Center working first as a Medical-Surgical nurse and then in its Post Anesthesia Care Unit. In 2015, he transitioned to the Army Reserve and joined the 807th Medical Battalion's 452nd Combat Support Hospital Det. 1 and served there until his current assignment to the 4-414th Regt SROTC to support ROTC training at Michigan Technological University.