Imagine: restoring, repairing, maintaining, and operating a 75mm Pack Howitzer cannon; firing off the Howitzer during Michigan Tech football games; meeting and greeting fans after games; presenting the cannon to students, faculty, and parents at K-Day and welcome week; providing morale to our Huskies. You can join the AROTC Cannon Crew.

The 75mm Pack Howitzer M1 (later renamed the M116 in 1962) was created in the 1920s. The artillery piece was designed so it could be moved easily over rough terrain. The design allows it to be taken apart into seven pieces and reassembled quickly with a well-trained crew. These different parts were designed so they could be carried by pack animals weighing from 160 lbs to 236 lbs giving it the name Pack Howitzer.

Manufacturing had a slow start with only 91 being made between 1927 and 1940. These first models used a wooden carriage. Later they used the metal M8 carriages allowing them to be used in Airborne operations. During World War II, production increased dramatically and by the end of the war 4,939 were built. The 75mm Pack Howitzer was used primarily by Airborne and Mountain divisions, the Marines, and some were given to other nations including the United Kingdom, China, France, and various Latin American Countries. 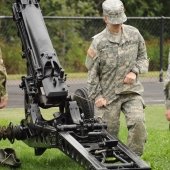 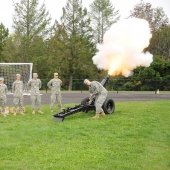 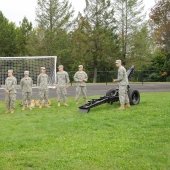 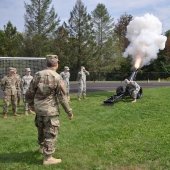 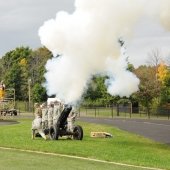 The Cannon Crew is in the process of restoring the 75mm Pack Howitzer and you can support the restoration effort through the College of Sciences and Arts.

The Cannon Crew is happy to answer any questions you may have. Please contact us. 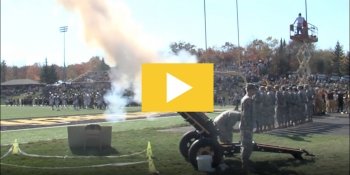