Researchers probe the genetic logic underlying eyespot development on butterfly wings, identifying the origin of a beautiful and useful novel complex trait. For the Michigan Tech biologist on the team, the work is a dream come true.

The concentric eyespots on butterfly wings are more than ornamentation. “The eyespots are known to function in predator avoidance as well as sexual signals to their mates,” explains biologist Thomas Werner. The Michigan Technological University researcher and associate professor of genetics and developmental biology is co-author of a journal article on the evolution of butterfly wing eyespots published by the Proceedings of the National Academy of Sciences of the United States of America (PNAS). “It turns out that the gene-regulatory network that places the antennae on the head of butterflies (and other insects) has been co-opted on butterfly wings to decorate them with concentric eyespots,” explains Werner, who joined the research team working in Antónia Monteiro's laboratory during a one-year sabbatical at the National University of Singapore.

The researchers focused on the African butterfly Bicyclus anynana, which has been a genetic model organism for a few decades, to unravel questions about evolution, development and mate choice in animals. With 17,500 butterfly species to choose from, why this particular African butterfly? “It has eyespots on its wings, is relatively easy to rear in a laboratory, and a transgenic technique has been developed to manipulate genes in this species, which is crucial when studying the genetic mechanisms underlying important traits in animals,” says Werner.

A New Job for Old Genes

Like researchers in a lab, genes collaborate and learn from each other. “A genetic pathway is made of a collection of genes that work together to create a certain outcome, like for instance, the outgrowth of an antenna on the head,” Werner explains. “Antennae are very old organs that were around for hundreds of millions of years before butterfly eyespots evolved. When butterflies decorated their wings with the first eyespots, they didn’t invent the wheel a second time. Instead, they used the group of genes that make antennae (and also legs) and put them to work on the wing. But instead of growing out antennae from the wing surface (that would make flight very cumbersome), the antenna-building genes were now co-opted into (or functionally connected to) the pigmentation pathway — they now talked to genes that make colors.”

"Novel traits are not made by creating new genes but rather by teaching old genes — and pathways — new tricks."Thomas Werner, associate professor of genetics and developmental biology

Werner was finally able to pursue a long-time desire to conduct butterfly research. He’s been breeding and collecting them since he was a child. “I always wanted to study butterflies, but one of my peers in college told me that if I don’t jump on the train of molecular biology, I will be unemployed. ‘Forget about the butterflies and put a lab coat on,’ she said,” Werner recalls. 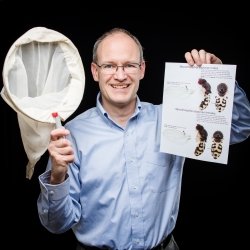 Watch the video. Listen to the podcast. Learn more about the researcher and award-winning professor.

He took the advice and for his master’s research studied the molecular genetics of a virus that damages the human heart. “I continued my Ph.D. studies in Sweden and made a sharp turn back to six-legged and winged animals (still just fruit flies), investigating the molecular mechanisms of the innate immune system, which turned out to be very similar to that in humans,” he says. “For my postdoc, I moved to the U.S. and studied the developmental genetics and evolution of a beautiful wing color pattern of a rare fruit fly species. This fly looked almost as pretty as a butterfly, so I was halfway where I wanted to be. Later, as an assistant professor at Michigan Tech, I didn’t dare to work with butterflies because it’s extraordinarily time-consuming and risky, especially if you need to get tenure and publish lots of papers. So I stuck to my fruit flies for another decade, learning to appreciate them as genetic model systems along the way.” Werner’s fruit fly research has its own rewards, from exploring avenues for cancer screening, prevention and treatment to creating the first fruit fly guide since 1921 for a large part of the U.S. — The Encyclopedia of North American Drosophilids (Volume 1): Drosophilids of the Midwest and Northeast, which Werner followed with Volume 2 about the fruit flies of the Southeast. But his spirits soared at the opportunity to work with his initial research inspiration in Monteiro’s butterfly lab in the Department of Biological Sciences at the National University of Singapore.

"The sabbatical in Singapore allowed me to just jump into a well-functioning butterfly lab, and it felt amazing! A dream came true for me."Thomas Werner, associate professor of genetics and developmental biology

“In Antónia’s lab, I worked closely together with another postdoc, Dr. Heidi Connahs. We were responsible for establishing transgenic butterflies from a variety of genetic reporter constructs that were needed to examine the activity of enhancers,” says Werner. “Enhancers tell a gene when, where and how much it is turned on.”

Working with butterflies, he found, is far more challenging and risky than working with fruit flies. “Creating transgenic butterflies turned out to be very difficult and required us to inject many thousands of butterfly eggs and to screen a few hundred thousand caterpillars that resulted from subsequent genetic crosses to detect transgenic insertions,” he says. “The research in this paper took thousands of person-hours that were contributed by an amazing team of talented graduate students and world-class postdocs. It felt amazing to be a part of this team.”

Another takeaway: As cool as it might sound, don’t look for a butterfly lab anytime soon at Michigan Tech. “I will stick with fruit flies because I learned to love them as well,” Werner says.