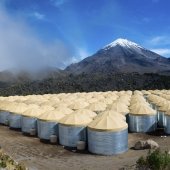 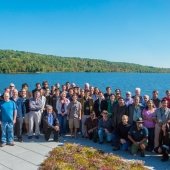 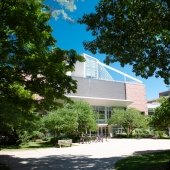 The Gamma-Ray Astrophysics Research group at Michigan Tech, led by founder Dr. Petra Huentemeyer, is designed to observe gamma rays and cosmic rays between about 100 GeV up to about 100 TeV. TeV gamma rays are the highest energy photons ever observed and are born in the most extreme environments of our universe, such as remnants of supernova explosions, star-forming regions, active galactic nuclei, and gamma-ray bursts.

The Michigan Tech group has designed, and tested (in a lab on the Michigan Tech campus) the calibration system for the water Cherenkov detector array of the High-Altitude Water Cherenkov Gamma-Ray Observatory or HAWC, and led its installation on site. In addition to being in charge of the maintenance of the calibration system, the group specializes in the analysis of data collected with the HAWC Observatory with a focus on the study of gamma-ray emission from galactic objects like supernova remnants, pulsar wind nebulae, and star forming regions. Emphasis is placed on multi-wavelength studies, and the group has contributed to the development of algorithms that allow to combine data from the HAWC Observatory with data from the Fermi Space Telescope, to maximize the scientific output of both instruments. The code development and analysis is conducted on high performance computing clusters at University of Maryland and Universidad Nacional Autónoma de México as well as computers at Michigan Tech, located in three offices in the Dow building and in a lab space in Fisher Hall. 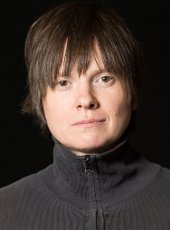