Thirty might sound like a crowd, but the newest inhabitants at the 5,000-square-foot home are a school of goldfish that fertilize the aquaponics garden in the basement of the former University presidential residence. While fish can’t do laundry or cook meals, the human tenants of the six-bedroom, six-bathroom, three-story house at 21680 Woodland Road are putting the new appliances to good use — and tracking data to help Whirlpool with research and development for appliances of the future.

“I heard about the project through Whirlpool’s Michigan Tech recruiting team,” said company sustainability project engineer Jason Schneemann. “They were up there last fall, and had some connections at the house.”

One of those connections is former house manager and Alternative Energy Enterprise (AEE) member Rose Turner, a December 2018 environmental engineering graduate. Whirlpool first learned about the house during Spring Career Fair 2018. With characteristic Husky tenacity, Turner, who was working in the Benton Harbor area in summer 2018, followed up with the company, resulting in the generous donation.

"We hope to use the house as a resource to engage with Michigan Tech students on a variety of topics and also for recruiting and engaging with the broader MTU engineering community."Jason Schneemann, sustainability project engineer, Whirlpool

The Power of Partnerships

“We want to see how a ‘lived-in laboratory’ like ReNEWW and the MTU house match up in regards to energy and water usage, and how to monitor and utilize data from the houses to impact residents' behaviors in a more sustainable way,” Schneemann said. He’s been checking in with the SDH project regularly, sharing information on aquaponics and other sustainability practices and conferring with students on their ongoing and future projects.

The three-floor abode, built in 1953 by Herman “Winks” Gundlach, is not a house of long soaks in the bathtub or nights in front of a roaring blaze in one of the two fireplaces. Even seemingly luxurious features — like the Wi-Fi-connected LED lights in the dining room that turn on, off or different colors with the tap of a cell phone — put energy savings first.

“We live conservatively,” SDH manager and tenant Meghan Schultz said. “I love having roommates with a common goal.” There’s a comfort in not having to explain why you don’t want the thermostat jacked up (it’s set to 62) or why compostable food scraps shouldn’t be thrown in the garbage.

The house is overseen by AEE, one of 25 student Enterprise teams at the University that work on real projects with clients and corporations. The students who live in the house don’t have to be Enterprise members (currently, none are). Tenants apply through a competitive process and commit to co-hosting regular open houses with AEE for community education. Tenants handle the day-to-day operations, and the Enterprise spearheads big projects that require long-term planning.

Warren Krettek, AAE Team leader and a senior with a dual electrical and computer engineering major, wants to pursue a career in sustainability. His Senior Design project focuses on a system to monitor SDH electrical energy use.

“We want to make the home as sustainable as we can make it, hopefully net zero-based,” he said. "The goal is also to experiment with new techniques like aquaponics and indoor composting, while communicating about sustainability practices that are cost-effective and fun for people to do in their own homes."

Net zero means the amount of energy the home uses equals the amount of renewable energy it creates. That’s a tall order for many homes in the western Upper Peninsula, considering the prevalence of aging structures, an aging population and the highest energy costs in the United States. The mission of the demonstration house project is to show area residents how to conserve energy and save money.

“The desire to live sustainably takes teamwork. We’re conscious about using every resource and about how waste is generated and controlled,” said Schultz, a third-year geological engineering major. “We can implement as many engineering projects as possible, but it’s important to take steps in our own homes.”

During a Winter Carnival Open House on February 8, tenant Sophia Jensen, a third-year computer science major, was busy folding brochures the group made to share with visitors to highlight projects in the house, as well as information on how to calculate current energy use, make safe and effective home cleaning products, and other tweaks — small, medium and large — that result in energy and cost savings. Students use data they’ve collected from the house to drive home how simple things make a huge difference.

In the basement, which back in the day would have been known as the rumpus or rec room, tenant and second-year civil engineering major Kirill Velat mixed up sparkling non-alcoholic fruit beverages for visitors clustered around the aquaponics project. Parsley, carrots, mint, oregano and lettuce spring from the grow bed, a lush green contrast to the snowscape outside the floor-to-ceiling windows with spectacular views of the Portage Lake Shipping Canal.

Krettek apologizes for the brown gunk on the tank walls, excess nitrifying bacteria, a product essential to the process. The group is deciding whether to install an additional filter or use a natural means, like an algae-slurping snail or old-fashioned elbow grease, to clean it. The clarity of the water itself, which is filtered by the plants absorbing the nutrients created by the fish waste, is a sharp contrast. In this self-sustaining loop maintained by a simple sump-pump system, there's only one daily input: fish food.

Tending to the fish is one of many assigned tasks tenants agree to take on when they apply to live in the Sustainability Demonstration House. Students are chosen by a cross-campus committee. This year's residents also include Mina Kukuk, a graduate student pursuing her master's in environmental engineering, and one of the first tenants chosen to live in the house when it opened. Gwen Nitz, on track to receive her bachelor's in environmental science in May, has lived in the house since fall. Nitz, who has accepted a job as a math teacher with Peace Corps Liberia, studied and worked abroad in Bremen, Germany before moving in. Germany is considered a world leader in green innovation and infrastructure, and Nitz found ways to apply what she learned about sustainable living there to the SDH.

The Alternative Energy Enterprise is as eager to work with other interested companies as it is with the next round of tenants. “We’re always looking for new projects and working with companies to conserve energy and reduce waste,” said Krettek. Get updates on Sustainability Demonstration House events on Facebook, and learn more about the next phase of the project on Superior Ideas.

Be Part of the Project You can donate toward essentials like a new roof membrane, painting the home exterior and replacing heating system circulation pumps through Superior Ideas, Michigan Tech's own version of a crowd-funding platform.

This is the second phase of crowd-funding. The first exceeded expectations. "It is heartwarming to see how engaged our local community is in this project," said project advisor Jay Meldrum. "Cash donations along with corporate donors have helped make this project a success."

Originally, it was hoped grant funding could support the Sustainability Demonstration House. "When we didn't receive the grant, we chose to use Superior Ideas crowd funding as well as rent money to directly fund house improvements," Meldrum said, adding, "Our own Facilities Management team makes sure the house is maintained like any other dorm facility. It truly is a team effort and a big success."

Learn more about the next $20,000 goal — and other ways to help (like donating energy-efficient windows) — on the Superior Ideas project page. 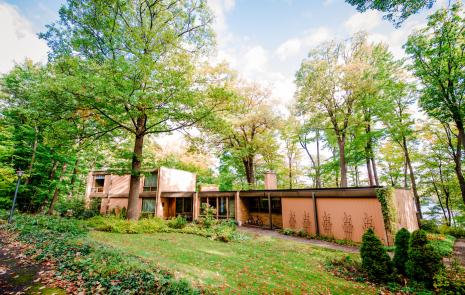