Green light, go. Red light, no. An MTU graduate and his professor launch an autonomously operated instantaneous warning system that helps beachgoers decide whether it’s safe to go in the water. 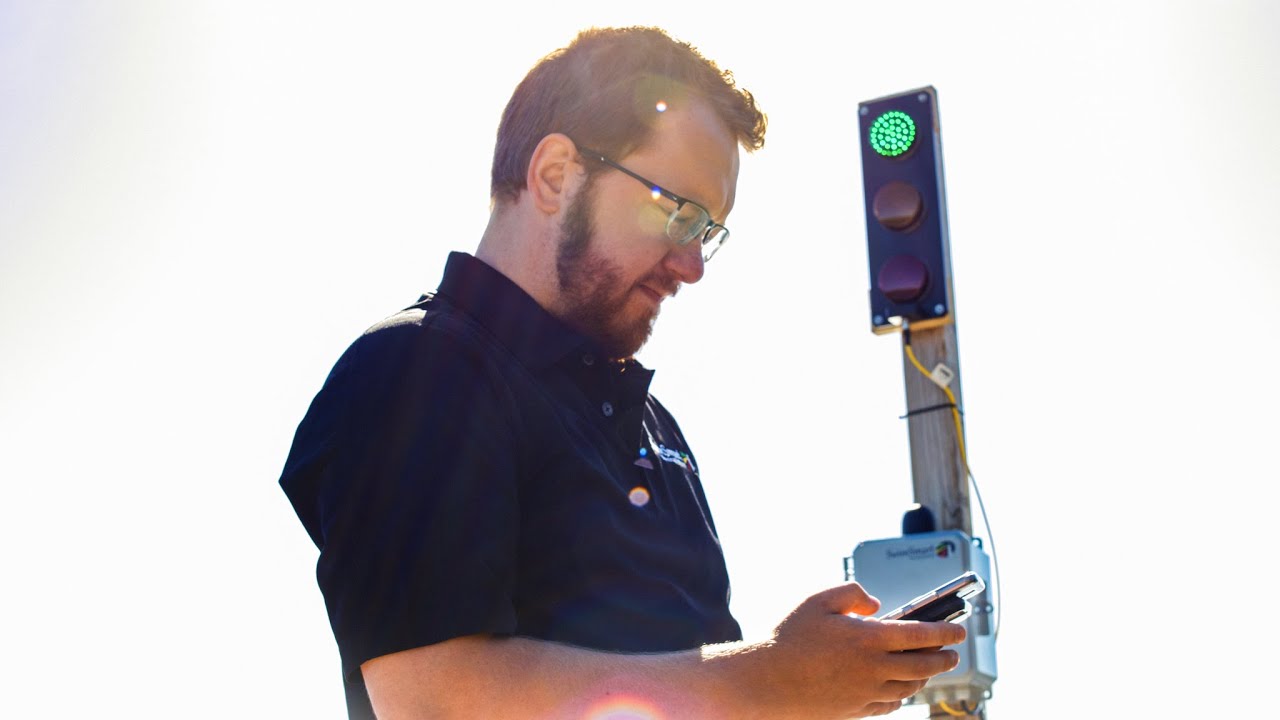 Huskies turn ideas into careers. Michigan Tech grad Jake Soter ’19 ’20 started working on a project to help beachgoers decide whether it’s safe to go in the water while doing his Senior Design project on Lake Superior with his professor, Andrew Barnard. Long hours and many iterations later, they created SwimSmart Warning Systems. Because there’s nary a Pamela Anderson or even a flag warning system in sight at most of our Great Lakes beaches. And knowing what lake conditions are like before you get in the water can save lives.

Lifeguards and flag warning systems aren’t uncommon on ocean beaches. Both are a rarity on the Great Lakes, which can present similar hazards to swimmers, from rip currents to high waves. And, human-made structures such as breakwalls and piers can create additional in-water hazards, like structural currents.

In many Great Lakes shoreline communities, the fire department or other municipal employees are in charge of monitoring National Weather Service (NWS) beach forecasts and changing flags to indicate whether it’s safe to go in the water. If there are more pressing matters away from the beach — or the weather changes rapidly — there’s a time lag between forecasts and flag updates, said alumnus Jacob Soter ’19 ’20, co-founder of SwimSmart Warning Systems.

“As engineers, we thought, ‘There’s got to be a better solution than changing these flags.’” Soter said. “What we came up with is essentially using a cellular network to change the flags automatically. It can be controlled with your phone or any computer.” And, the signal strength outstrips conventional cellular. “It’s long-range 5G generation,” he explained. “Like playing with a different deck of cards.”

Drowning fatalities are up on the Great Lakes, from 97 in 2019 to 108 in 2020. Of 980 overall deaths since 2010, nearly half occurred on Lake Michigan, according to the Great Lakes Surf Rescue Project, which reports 34 drownings so far this year. Not all the fatalities can be attributed to conditions at swimming beaches. But helping swimmers exercise good judgement is a powerful preventive measure, said Andrew Barnard, director of the Great Lakes Research Center, professor, advisor, spinoff co-founder and fellow alum — he graduated in ’02 and ’04.

“Almost anyone knows to stay out of the water when waves are six feet or higher,” Barnard said. “It’s the three- to five-footers that look deceptively fun. They’re the most deadly.”

Soter, who earned his electrical and computer engineering degrees and his MBA at Michigan Tech, said the SwimSmart project got its start in Tech’s SENSE Enterprise (Barnard advises the team). SENSE — Strategic Education through Naval Systems Experiences — focuses on maritime projects to get undergraduates excited about maritime architectures and systems that can benefit both defense organizations and communities. The spinoff really got rolling when Soter took it on as his Senior Design project, required for all MTU College of Engineering grads. Winning pitch contests and innovation awards offered additional encouragement.

SwimSmart connects over the internet, allowing communities to remotely control beach warning systems. The lights can either autonomously follow NWS beach forecasts or be overridden by local beach managers. “The safety system operates like a fire alarm system, allowing multiple lights, emergency buttons, call boxes and buzzers to be linked to a single control panel,” Soter explained. Weather stations and cameras can be integrated to provide forecasting data on the beach back to NWS, providing a closed-loop warning system that can either be wired into a building or operate on a standalone solar-battery source.

"We geeked it out — we're engineers and we wouldn't have it any other way."Jake Soter ’19 ’20, SwimSmart Warning Systems co-founder

Two of the busiest Lake Michigan beaches on the Michigan shoreline are using SwimSmart. Frankfort Beach has a system posted at the beach entrance and another on the pier. Muskegon’s Pere Marquette Park is also piloting two of the devices. “They like the simplicity of it,” said Soter.

The concept works equally well for remote beaches, he said. Beyond the bare-bones warning system, there are numerous applications for additional smart-connected beachfront technologies, including assessing climate resiliency markers like beach erosion.

Soter envisions a continuous loop with NWS in which the SwimSmart systems feed information back to the national agency, making it possible to issue more frequent and accurate localized reports to the public. Typically there are only a couple of daily updates at present.

“With sensor arrays on the buoys, there’s no reason we can’t send real-time data back to the Weather Service,” Soter said, noting that the capability would be especially helpful in the  “dark spots” where forecasting tools are not currently deployed. It would also meet the need for more near-shore buoys on the Lakes — currently, most buoys are offshore.

"We can put a data point on the beaches. Then there's no more guessing."Jake Soter ’19 ’20, SwimSmart Warning Systems co-founder

In the Great Lakes Research Center boathouse sit two earlier prototypes of the project. Laughing, Soter said he never would have believed how many prototypes it took to get the product to marketable level — and that SwimSmart is still iterating with the help of feedback from clients like Frankfort and Muskegon leaders. “We’re working closely with them,” he said.

Down the line, Soter envisions the devices as hubs that multitask beyond swim safety and environmental monitoring — offering greater connectivity for people seeking the Great Lakes lifestyle and opportunities for work-life changes inspired by the COVID-19 pandemic. Both circumstances opened a door for Soter, who decided to take the plunge with his own business rather than going to work where he’d been hired.

“More people are working remotely. That’s where we’re moving as a society,” he said. “Remote work requires better wireless tech. With remote routers we can put Wi-Fi on the beaches, or anywhere.”

For now, beta testing, product awareness and relationship building are part of the fledgling endeavor’s overall strategy as it connects with others involved in what's known as the blue economy — a new take on enhancing sustainable economic activity in, on and around the water. The state of Michigan plans to be a world leader in the initiative as a "freshwater and freshwater innovation capital." SwimSmart wants to be part of that.