Technological Tricks and Sound Design Treats at Haunted Mine

A half-mile in and seven levels below ground, the 15-by-15 dark tunnel awaits the brave souls who dare to enter for pre-Halloween tours Thursday, Friday and Saturday, October 25-27. This is the second year Michigan Tech students in sound design and audio production and technology programs have collaborated on the project.

This year, Huskies are taking the event to the next level, with a full, scripted production that involves the entire Visual and Performing Arts (VPA) department, says Josh Loar, a professor of practice in VPA. From costumes to staging, students are getting in on the act, including theatre and entertainment technology and theatre and electronic media performance majors.

It's sound design for a haunted mine.

"We come up with what kind of sounds we want and where we want them, and then the systems team figures out a way to get speakers there and facilitate our creative intent," says Christianson.

The team toured the mine, mapping where events could happen and creating conceptual and technical sketches. They admit they had a head start on the creep factor just from being in the mine itself. "We don't have to do much other than turn the lights off," jokes Christianson.

"And then when you start playing your creepy sounds over the speakers you've hidden, it gets much weirder," Loar says, laughing, pointing from Christianson to Sendek.

"There are places in the mine that, every time I've been there, it definitely leaks in that one spot. There's a trench that a river flows through when it floods that I want to put speakers in," says Sendek. "We want to put speakers overhead, and there are railroad ties, hooks and pipes coming through. Waterproofing it all and then finding enough cable to make it all work—last year they used about 2,000 feet of speaker cable," he says.

"This year my math says we need about 2,535 feet of speaker cable."Henry Sendek, Haunted Mine system designer

"We have to use about 1,000 feet of microphone cable, we have to get power everywhere," says Sendek. "To get signal to the speakers, I have to run network lines so I can control it, and put it all in amp racks and that has to be waterproofed."

From figuring out what resources the group can use to hauling equipment in and out, down a two-track to the mine entrance so they don't interfere with regular mine tours, working remotely presents challenges designers don't face when operating on campus. In VPA performance spaces like McArdle black box theatre or Rozsa Performing Arts Center, they don't have to clean mud off the equipment. Content design and sound checks are also trickier in the mine.

Be afraid. Be very afraid.

Cues, tension plots, triggers—designing a soundscape is a complex form of storytelling. If you don't think it's important to narrative, Loar tells his students, try watching the film "Jaws" with the sound off.

No giant, human-eating sharks are lurking in the Haunted Mine. The scenario is a portal to the 90th level (not a spoiler alert, it's on the promotional posters). "We have a script, so we know what's supposed to happen, and the big reveal at the end of the tour," says Christianson. Seeing what the portal looked like, from conceptual sketches, helped the content designers decide what kind of sounds it might emit.

"Some events are caused by sound, we're expecting people to react to the sound, and sometimes the sound is reacting to what people are seeing."Aaron Christianson, Haunted Mine content designer

They laughed, they cried—they groaned and screamed and recorded it. "There's also a lot of heavy breathing," Christianson says, "and that's really creepy." He and Wilson created the sounds using two different digital audio workstations, recording in VPA studios. They researched horror effects to find special-effects techniques, like pulling a bow from an upright acoustic bass across a cymbal, or sheet metal. "A lot of our work has been experimenting. We recorded a couple of hours' worth of sounds and we're going to use maybe 10 percent of it in the mine," he says.

After weeks of production meetings and technical sessions, they still can't be sure how the gear will perform or how the sound will be heard or received. Revision and re-thinking are a normal part of the process, Loar says.

Another unexpected element on this particular project: "One of the interesting facts about the mine is that it's pretty acoustically dead. There's not a lot of reverberance," says Christianson. Reverb, similar to an echo but more subtle, is caused by sound waves reflecting off surfaces in an area. While the mine tunnel is a long narrow tube, its surfaces are broken up by drilling and mining operations, creating fewer reflections. Designers found themselves adding in much more reverb than expected to create a richer, more enveloping sound—more like what a visitor might expect an old empty mine to sound like.

Teamwork and timing are crucial.

In this project, working with 31 speakers is a strong illustration of the art of sound design and where and how content and system design collide, notes Loar. The artistic vision hinges on the technological details. The question, he says, is "How do we make this non-conventional space into an immersive sound environment?"

Different layers within the sound can be in and moving between multiple speakers. And then there's the other layers: "there are students doing the lighting, props, costumes, helping write the script, everything else," says Sendek. "Every decision you make is somehow going to impact every other department."

Technical rehearsals take place early this week. The production company, including sound designers, will pre-load and test gear and work with the actors (pre-startling them, they joke) to tie all the technical elements together piece by piece.

Huskies look beyond the Haunted Mine.

Michigan Tech's VPA sound programs give students opportunities to directly and continuously apply what they're learning, to help them figure out what they want to do in life. Christianson plans to continue his work with marching band audio and sound systems after graduation, touring the country with drum and bugle corps as he's done in previous summers. "I was a performer in the activity before I was a technician, and that's what I plan on spending the rest of my life doing—at least for now," he says.

Sendek also wants to go on tour, as a technician for large format live sound systems. "The past two summers I interned at 8th Day Sound. They rent to Taylor Swift, Beyoncé, Jay-Z, every big name, top concert venues. I have friends all over the country and the world."

Enter — If You Dare 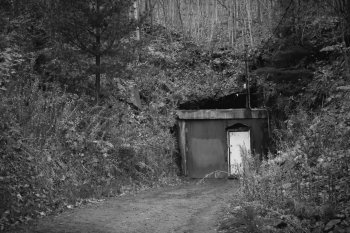 Annual Haunted Mine Tours, which close out visitor season, are a fundraiser for Quincy Mine Hoist Association. Tours are offered on Thursday, Friday and Saturday, Oct. 25, 26 and 27, and begin every 45 minutes starting at 6 p.m. on Thursday and Friday, and 4:30 p.m. on Saturday. Buying tickets in advance is recommended. Call 906-482-3101. Wearing shoes suitable for wet, muddy conditions is also recommended. For the latest updates, visit the Quincy Mine Hoist Association Facebook page, and learn more about the iconic landmark and its place in copper mining history.