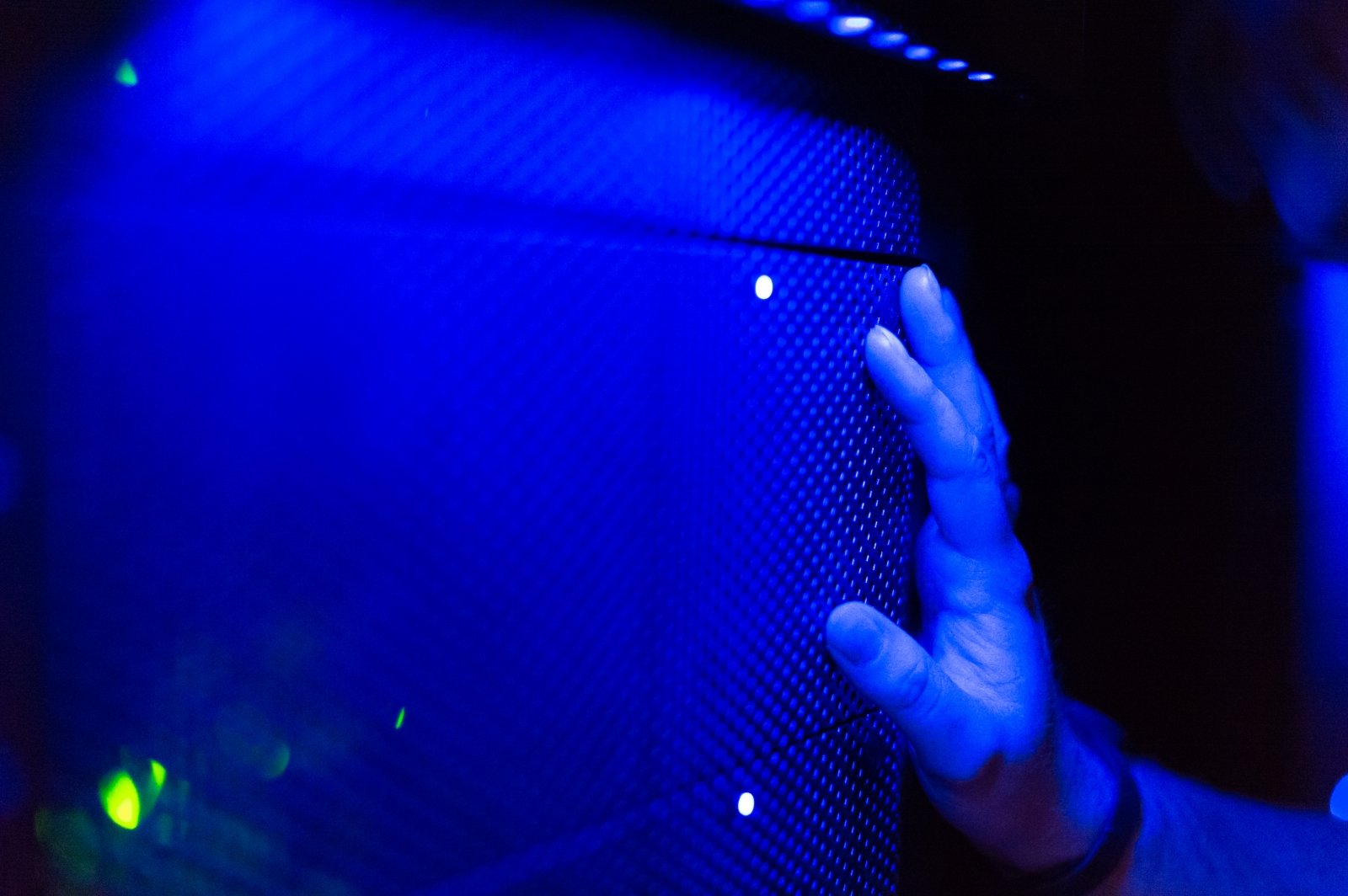 The leap from community college to four-year university can be daunting. Three scholarship winners who transfer to Michigan Technological University this fall get a jump on the transition, as part of a million-dollar program to create a highly-skilled, well-paid STEM workforce.

Michigan undergraduates Karen Helppi, of Calumet, Corey Blankenship, of Gaylord and Isaac Thrasher, of Johannesburg, are among the first recipients of $4,500 annually renewable scholarships to attend Michigan Tech under the Engineering Technology Scholars IMProving Retention and Student Success (ETS-IMPRESS) project. Each is majoring in a different course of study within the School of Technology; all three took Michigan Tech up on its offer to attend a five-week bridge program earlier this summer to orient themselves on campus and conduct research in their labs.

There were 44 applications from six states, says Michigan Tech School of Technology Professor and Program Chair Nasser Alaraje, principal investigator for the project. Ten students were chosen this year: six first-year undergraduates and four students who transferred from community colleges, including one student of African American decent, one multiracial student and two female scholars.

The applicants didn't make it easy for the selection committee, and make a strong case for why every notch upward in your grade point average matters. The average GPA for all applicants was 3.61, while the average GPA for first-year awardees was 3.65 and average GPA for transfer awardees was 3.6. The 60-point selection criteria rubric used by the committee also ranked high school ACT scores for the first-year applicants or a relevant associate's degree for transfer students; honors and awards; a personal statement; letters of recommendation; and level of unmet financial need. The average unmet need of the 44 applicants was $10,883.

"We are definitely providing a life-changing opportunity for these students."Nasser Alaraje, School of Technology

Thrasher and Blankenship hail from towns about 15 miles apart in the northern Lower Peninsula.

Helppi's hometown is much closer—roughly 12 miles north of campus—but she was just as glad as her fellow scholars for the opportunity to get her bearings at the University.

Helppi, a major in mechanical engineering technology, completed her two-year studies at Gogebic Community College on the Houghton campus, beginning under the Calumet-Laurium-Keweenaw School District’s fifth-year arrangement with Gogebic that makes it possible for CLK graduates to attend free. Then came the email about the ETS-IMPRESS program that opened the door to her dream school.

“I’d been looking at Michigan Tech as my ultimate goal for a four-year college since I was pretty young,” she says. “Growing up in this area, it’s the big college around here. Growing up, that’s what my interests were about. I took my first drafting class in seventh grade. That started me on my path.”

Helppi was familiar with the Student Development Complex, home to Michigan Tech athletics and community programs. She participated in women in engineering events for local students, went swimming and attended sports events. But main campus was almost as unfamiliar to her as it was to Blankenship and Thrasher. All three got the lay of the land during the ETS-IMPRESS summer bridge program.

“It was a really nice way to get to know the campus, to get to know some of the people, where things are located,” she says. “The class we took goes over everything you need to transfer to a four-year college.”

Thrasher, a computer network and system administration major who attended North Central Michigan College in Petoskey, also appreciated the preview. “I got to figure out a little bit more about the dorm, the people, the instructors,” he says. When he learned about the ETS-IMPRESS program, he thought about value beyond money for school (even though that was important). He also values “the experience and the ability to work with researchers.”

“When I was younger I started messing around with computers, playing with them, building them, fixing them. I started taking dual enrollment classes when I became interested in computer networking. I’ve been interested in this field ever since,” he says.

For Blankenship, an electrical engineering technology major who attended Kirtland Community College in Roscommon, the career path was a longer, winding road. Then he pinpointed the commonality in everything he’s pursued: “I’ve been fascinated by how things work my whole life.”

“As soon as I saw the email I went for it,” he says. “For financial purposes, and future gain and growth.”

Blankenship says it’s not just the physical surroundings of Michigan Tech that are different from a community college—the adjustment is also a shift in mental attitude. “The research that I’ve been conducting is a great pathway into working into that area and mindset. Also, the honors class we’re taking in tandem with this reinforces skills and good study habits.”

ETS-IMPRESS is a holistic program, designed to build successful outcomes by creating an ecosystem in which all aspects of success in academics and career preparation have been carefully thought through. Everything students need to help them succeed has been put in place, including emphasis on soft skills employers want, like the ability to think independently but also be part of the team.

The School of Technology focuses on active, applied disciplines, with a curriculum that helps students learn how to analyze problems and design solutions. Pavlis Honors College, a partner in the project, inspires students to lead, create and forge their own pathways to success, infusing ETS-IMPRESS students with best practices for attaining their goals.

The three ETS-IMPRESS scholarship recipients joined students on campus for the annual Michigan College and University Partnership (MiCUP)Transfer Transition Program. It’s also designed to get students ready for the leap from community college to university, or, as Blankenship puts it, “the big leagues.”

The ETS-IMPRESS students were enrolled in the same Honors Research Seminar course as the MiCUP students, lived in the residence hall with them and were invited to all the recreational activities. “Integrating the two programs helped the ETS-IMPRESS students build community and have support from other students,” says Michigan Tech Assistant Dean Kellie Raffaelli, director of Michigan Tech's Center for Diversity and Inclusion and a partner in the project. “Because the students all took class together, lived together, ate together, it made bridging to Michigan Tech a more comfortable transition.”

"In addition to introducing students to important campus resources like the library, the course introduces students to key concepts related to research and scholarship," Meadows says, including the nature of research, searching and reading scientific literature, mentoring styles and best practices, documenting research, research integrity, writing research abstracts and designing and presenting research posters. "I also met each week with the ETS-IMPRESS students to discuss research and study skills, educational and career goals and reflect on their individual successes and perspectives of the program."

Learn Research by Doing It

For School of Technology students, most learning takes place in the lab. The ETS-IMPRESS trio was immersed in the research process, guided by a faculty member in their respective programs.

For her summer research, Helppi worked with MET’s material testing machine in the lab. “It’s an in-class experiment tester that can test different metals and plastics in different ways. It gives students on-hand experience about how it would feel to deform material in a certain way. I calibrate and test the machine to make sure that the results we’re getting are accurate,” she explains. “It’s connected to a laptop; software records the data in graphs, to compare it to what it should be.”

“We’re taking a look at medical devices and their securities, focusing on a form of Bluetooth and trying to discover whether that form of Bluetooth is secure,” he explains. “If it has vulnerabilities we want to report those, and perhaps make changes to make them more secure.”

A major portion of Blankenship’s summer research is familiar ground: collecting and analyzing school curriculum at the associate level, a necessary step to determine ways to address the pressing need for technology curriculum. As he notes, the internet of things is making an impact now, but current two-year programs aren’t up to speed. "I’ve had that firsthand experience," he says, noting that his preliminary research finds “for engineers or technicians there is not much. The skills gap is already large and could be that much greater.”

Blankenship was also involved in a robotics project with a team of graduate students and professors—an experience in the interdisciplinary research that’s a University hallmark.