He taught. He toured. He even fit in a workout in the human performance laboratory. Steve Short, a 2010 graduate with a dual major in biological sciences and exercise science, was honored by the Michigan Tech Department of Kinesiology and Integrative Physiology (KIP), and inducted into the Michigan Tech College of Sciences and Arts Academy. The former Huskies quarterback–who also became a certified strength and conditioning specialist, earned a minor in psychology and coaching certification while attending Michigan Tech–visited his alma mater at the Student Development Complex to chat with students and faculty about his work with a pro basketball team, and to check out the latest developments in the department's research and education programs. While there have been a few changes in the physical building since his student athlete days, Short was clearly at home as he headed down the halls. "It's got the same feeling," he says.

By skipping an opportunity to sleep in the morning after his midnight arrival, Short was able to shoehorn a co-lecture with Dr. Chris Moore into a tight one-day itinerary. "It's an honor and an opportunity and just really fun to hang out with Tech students," he said.

Perhaps the most telling indicator of his devotion to Michigan Tech: he missed an important playoff game to be here (the Nuggets won, 100-96).

"We're very proud of everything Steve has accomplished in a short decade after his graduation from our program. He is a wonderful example to our current students that hard work, passion and a commitment to lifetime learning can get you just about anywhere you aim to be professionally."Jason Carter, Department Chair and Professor, Kinesiology and Integrative Physiology

Path to the Pros

Short joined the Nuggets in 2014 as team physical therapist and assistant strength and conditioning coach. In 2017 he became director of sports medicine. He's responsible for integration of evidence-based musculoskeletal services, working with trainers, strength coaches, physical therapists and the other specialized services and techniques that upper echelon sports programs use. Short coordinates a cohesive program for the 17 athletes in his charge that takes all aspects of health into account, from sleep hygiene to injury prevention.

"It can be challenging to make sure everyone's on the same page," he says, noting that this model of holistic care can be beneficial for everyone, not just pro athletes.

What's it like to work with elite athletes? There's an aura about the players when they're out on the court "under the bright lights," Short says. "I'm there to help them perform to their optimal potential under those bright lights. But at the end of the day, it's no different than hanging out with anyone else," he says. "When they're sore, they're sore."

It's not easy to get your foot in the door of a major sports organization. The top three factors that helped Short create his future:

"Find what's fun, find a mentor, seek it out, put yourself out there."Steve Short

In the integrative physiology laboratory he met with Carter and his research team, who are working on a sleep and athlete study. In the human performance lab he got the hook-up, literally, on the work of Steve Elmer and his research group. Alyssa Vinckier and Alicia DenHerder, students participating in the doctorate in physical therapy program, a partnership between Michigan Tech and Central Michigan University, helped set up the demo.

"You gotta put me through the protocol, you can't make it easy," Short said, as he pedaled a stationary bicycle with blood pressure cuffs around his thighs and attached to a monitor, a technique used in PhD student Matt Kilgas's restricted blood flow (RBF) exercise study. The competitive spirit that served Short well as Husky quarterback kicked in as he asked about protocols, pain scale and limb occlusion pressure. "You guys are gonna make me cry," he joked during one rest interval. Short has used the technique, which can make muscles stronger and larger using less force, to help athletes post-op and during recovery from acute injuries. It's also useful for rehab for everyday folks because it can help correct asymetry—muscles that are stronger on one side of the body than the other can create imbalances and affect joints and balance, among other things. Kilgas hopes to conduct further studies specifically in that area.

Elmer explained the buzzing and pounding noises in the next room—renovations are underway to integrate the biomechanics and human performance labs. Short took him up on the offer to try out the department's Eccentron. Students who heard he was on campus stopped by to say hi in person. Some of them may have already met him virtually.

"Over the past couple years, Steve has engaged with our department by Skyping in to talk with new students about his unique career pathway," says Carter. "He does an outstanding job with that presentation, and our students consistently provide us positive feedback on the stories and insights he shares. What an incredible opportunity to hear from someone working with an NBA team."

Carter checks the clock. Time to move Short on to the next visit—the athletic department. Twice named Huskies Football MVP, three-time offensive back of the year, Short holds the record for most total yards in a game (504) and is second of all-time in per-game completion percentage and total passing yards. There's no doubt the Harold Meese Sportsmanship Award winner, and four-time GLIAC All-Academic Team member, who made the All-GLIAC second team his senior year, has plenty more reminiscing on his agenda.

Still, you get the feeling he could easily have stayed in the lab longer, chatting about repetition sequences and the chances of the Nuggets making the playoffs: "If we win, we're in." (The team ended its 2017-18 run April 11; its best season since 2012-13.)

Short steps off the machine and slips on his jacket. "He got his aerobic and his resistance," Elmer said.  "Exercise is medicine, so it's good to get it in for yourself." 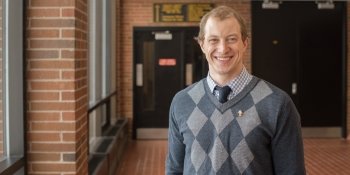