A new world record is at stake on Saturday, February 10, when Michigan Technological University students attempt to build more than 2,036 snowmen in one hour. They’re asking campus and community to help.

Huskies Do the Math (With a Disclaimer)

One of the most important calculations came early in the planning process. Is there enough snow on Sherman Field to build 3,000 snowmen? Four thousand? The current record, set in 2015 by the Drama 24 Unhandy Handyman organization in Akabira, Japan, is 2,036. However, Huskies being Huskies, students aim to exceed expectations by building as many snowmen as possible.

Lewis Marshall, treasurer of Blue Key Honor Society, the national student organization that's been a campus fixture since 1932 and puts on Winter Carnival every year, ran the numbers:

"Based on a total area of 13,000 square meters for Sherman Field, including the track, and given that at least a half-meter of snow has fallen on the field, that would provide 6,500 m^3 (1,000 liters) of snow to build with," he says. "With roughly 0.1 m^3 of snow needed to make each three-foot tall snowman, one could make approximately 65,000 snowmen, one meter tall (three feet equals 91.5 cm). That's using every flake, perfectly using every piece, and making a bunch of extra assumptions,” says Marshall, who figures, Huskies being Huskies, that someone out there is just itching to rip apart the math.

Snow? Check. People? Students need as many as they can muster to help with the task.

The 2015 Japan record was set during the filming of a TV drama, and 1,406 people participated, according to the Guinness website listing. It reportedly took an adjudicator and four witnesses two hours to measure and count the snowmen. Food coloring in spray bottles will be used to keep track of the Michigan Tech count, Nowosad says.

Guinness World Records receives an average of 1,000 applications each week, and applications take 12-15 weeks for review and approval, says a spokeswoman in the North American press office. She could not confirm whether any other attempts are being made to break the snowman record, or provide any other details. Information on world-record attempts is not disclosed until the documentation process is completed by the Guinness Records Management Team. Steps include independent verification, proof of measurement and verified time-keeping.

"The USG events committee decided on the world record for most snowmen built in one hour because it's something we haven't tried to beat before, and we thought the record was totally possible to break."John Nowosad, USG Events Committee Chair

Michigan Tech Broke Four World Records, Including Its Own

Winter feats of derring-do are nothing new for Michigan Tech Huskies—2006 marks a record-breaking Guinness trifecta. And a 2013 record still stands.

On February 10, 2006, three world records were shattered at Sherman Field thanks to Michigan Tech students, staff and faculty, kids bused in from local schools and other folks who wanted to get in on the fun:

Snowman Left Behind is a new (and maybe one-time) addition to Michigan Tech Winter Carnival, which launched January 12 with month-long statue building, will crest during the much-anticipated All-Nighter on Wednesday, February 7, and culminates Saturday night, February 10, with the Torchlight Parade and fireworks over Michigan Tech’s Mont Ripley Ski Hill. Snowman Left Behind invitations went out to local schools last month, but you don't need a formal invite. Come to the field at noon and sign up. 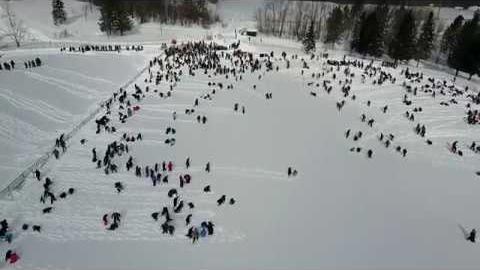 Snowman Left Behind leaves no one behind. Huskies, Winter Carnival visitors and the community are welcome to help Michigan Tech set a new world record for the most three-foot snowmen built in one hour. Parking is in the Student Development Complex lot on Sharon Avenue adjacent to Sherman Field. Blizzard T. Husky will be there to welcome the crowd.

If you don't wish to be photographed, this isn't the event for you. There will be cameras everywhere. In addition to required video and photography documentation, University social media and studio teams will be on hand to share the event with Michigan Tech alumni, family and friends. Share your own photos on social media using #snowmanleftbehind and #michigantech.