Listening Under the Ice

The watery world under winter’s ice is a mystery. It’s also a world full of sound. Now, as the days lengthen and the ice is retreating, researchers at Michigan Technological University are wrapping up their first winter season of underwater acoustic studies.

Learning more about acoustic properties underwater — and specifically under the ice — is important for designing acoustic communication networks and quiet underwater vehicles. These networks and vehicles have a range of applications. Environment monitoring is an example, encompassing everything from ice movement to the habits of aquatic critters to keeping tabs on chemical conditions.

Although the applications are broad, studying acoustics all comes back to sound: Beeps and chirps for network signals, the glassy crinkle of floating ice and even the underwater reverb of a snowmobile passing by. Each sound tells a story; each narrative helps researchers understand the icy-cold depths we can’t normally see. Although this live webcam from the Great Lakes Research Center can give you a sense of the view and supporting this Superior Ideas project helps the Great Lakes Research Center to do more under-ice research. 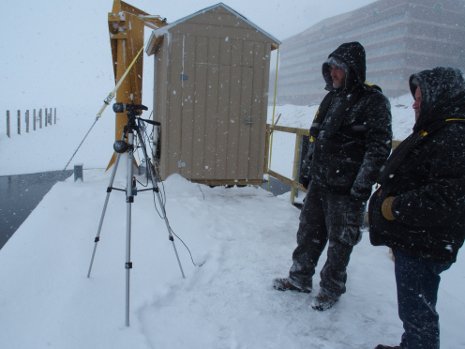 Below the Surface: Passive Hydrophones

The speed of sound is almost five times faster underwater than in air. Additionally there is very little absorption of sound underwater, so underwater sound can travel a long distance. Instances of low-frequency sound traveling thousands of miles in the ocean have been documented, and is how whales communicate over very long distances.

There are two ways to measure sounds: actively and passively. “Passive acoustics is just listening to whatever is out there,” says Andrew Barnard, an assistant professor in mechanical engineering studying acoustics at Michigan Tech. He helped install a passive hydrophone system off the dock at the Great Lakes Research Center (GLRC), which is a unique set-up under the ice.

“For most people to do under-ice research, they have to get an Arctic vehicle, and they have to go to the polar regions to test in tough climates — it’s expensive and time-consuming,” Barnard explains. “Here, we can walk out to the Keweenaw Waterway and do a test in an afternoon.”

Here are some of the sounds they pick up on those tests.

The hydrophone Barnard uses is a waterproof microphone that is designed to pick up sound waves underwater. Like in the air, underwater sounds are pressure waves. They radiate out from the sound’s source, oscillating particles of whatever medium the waves travel through, whether that’s lakebed, lake water, ice or the air above. But since air and water are pretty different substances, recording and measuring underwater acoustics is also quite different from sound waves in the air.

Understanding those differences and maximizing underwater acoustics will help Barnard design quieter underwater vehicles and sensor systems. “In order to do that, you need a quiet testing facility,” he says, adding that Michigan Tech’s location is ideal for his research.

Within underwater acoustic networks, relaying information is key, whether it’s about the condition of nodes along a pipeline, naval command control or the frolicking behavior of seals.

“There are a wide range of applications,” says Zhaohui Wang, an assistant professor of electrical and computer engineering at Michigan Tech who studies underwater wireless communication networks.

For networks above water, radio waves connect the wi-fi in our homes and favorite coffee shops — along with cell phones, televisions and car stereos. Wang’s network, however, has to adapt to being underwater.

“We cannot use radio signals under water because they attenuate so fast,” Wang says, explaining the radio waves weaken and disperse more quickly in water. “So we have to use acoustics to communicate.”

The chirps and beeps used by Wang in her acoustic signal might be familiar, but how they travel probably isn’t. Much like Barnard’s passive hydrophone, which picks up sound waves and records them, Wang’s network relies on the oscillation of water as sound travels through it. The sound waves ripple out from one network node to another.

This is not as quick as the radio signals we’re used to: In 1.3 seconds, sound can transmit 2 kilometers, and within that time, the radio signal from Earth has reached the moon. This gap is a speed bump, but underwater acoustics is the only option for autonomous vehicles with ice cover, since they cannot surface to access the GPS or satellite services.

Wang makes do with the limitations. “My goal is to design communication algorithms and network protocols that let nodes talk to each other,” Wang says, explaining that this gets complex as more nodes are added to the network. All the nodes have to coordinate for speaking and listening. 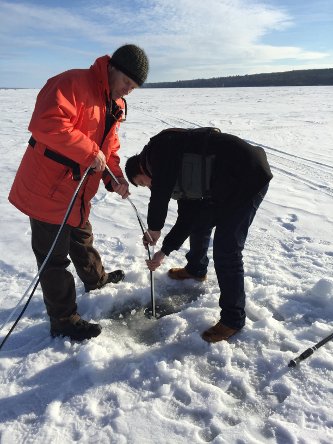 Starting last August, Wang and her research group have  conducted several underwater communication tests. They last went out in March — and found some benefits to ice cover. Her team was able to send a signal over four kilometers away, which came in handy when their cell phones died. Testing also proved much easier, since the team could just walk out on the lake.

“There is very little under-ice communication data available,” Wang says. “We have to take advantage of one of the unique features of this area and run under-ice tests.”

Wang and Barnard plan to continue developing this body of under-ice research along with their all-season underwater acoustic tests. The work will keep maximizing the advantages of Michigan Tech’s location, providing yet another reason to appreciate having Lake Superior out our backdoor.