The cryosphere is most vulnerable to climate change with observed and predicted increases in temperature greater in Arctic and boreal regions than other earth biomes. In addition to overall increases in temperature, climate change is leading to wetting of some parts of the Arctic and drying in others. MTRI leads and participates in many projects in the Arctic focused on changes in glaciers, lakes, biodiversity, permafrost, soil moisture, wildlife habitat and wildfire occurrence. MTRI scientists work closely with the North Slope Science Initiative and Circumpolar Artic Fauna and Flora international efforts for mapping and monitoring change. MTRI was also represented on the National Research Council’s committee on Emerging Research Questions in the Arctic and co-authored the report “Arctic in the Anthropocene”. 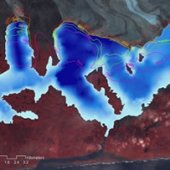 Interdisciplinary Science at the Bering Glacier

To better understand the melting (ablation) of the Glacier, MTRI designed and fabricated a device to record glacier melt and movement. MTRI has also conducted water characterization measurements in Vitus Lake, a large ice-marginal lake at the terminus of the Glacier.

Learn more about our work in the region.

MTRI deployed soil moisture and soil temperature loggers in several tundra sites on the North Slope and has downlinks for real time monitoring.

The Arctic in the Anthropocene