For well over a decade, Michigan Tech Research Institute has been a valued part of Michigan Technological University.

The Michigan Tech Research Institute (MTRI) became an independent research center within Michigan Tech (MTU) in October 2006. But the Institute's heritage dates back well before then, with roots that can be traced to the University of Michigan Science and Technology Lab that later became known as Willow Run Laboratory (WRL).

Willow Run Laboratory was famous for development of the first operational aircraft based multispectral scanners, infrared remote sensors, and fully focused synthetic aperture radar (SAR) images used by NASA and the Department of Defense. Due to classified research concerns, WRL, a research arm of the University of Michigan, transitioned into a not-for-profit 501-3c called the Environmental Research of Michigan (ERIM) in 1972.

ERIM built upon the reputation established at Willow Run with pioneering developments in remote sensing technology and Earth science and military applications, growing to approximately 750 technical staff and $75 million in annual revenues. In 1997, ERIM split into for-profit and not-for-profit pieces. The profit piece, ERIM, International included all the classified projects. Ninety percent of the remaining activities were sold to Veridian, a venture capital startup, which in turn was acquired by General Dynamics (GD), then Radiant Solutions and finally MAXAR.

In 1997 the original not-for-profit ERIM had a large sum of money in the bank due to the sale of ERIM, International, which it solely owned, but only a few technical staff. Non-profit ERIM renamed itself the Altarum Institute and acquired Vector Research, Inc., a defense department health care, software, and logistics consulting company. Altarum at the same time hired back from Veridian/GD remote sensing scientists and engineers that preferred the not-for-profit technically unbiased mindset.

In 2006, Altarum decided to focus solely on managing the defense department health care system called Tri-Care. Michigan Tech, a public research university, was focused on establishing a presence in southeast Michigan. So, in October 2006 MTRI was created, and became part of MTU as a separate cost center within the University. MTRI named its Ann Arbor facility the Dave House Center for its benefactor, a Michigan Tech alumnus and frequent contributor to the University. 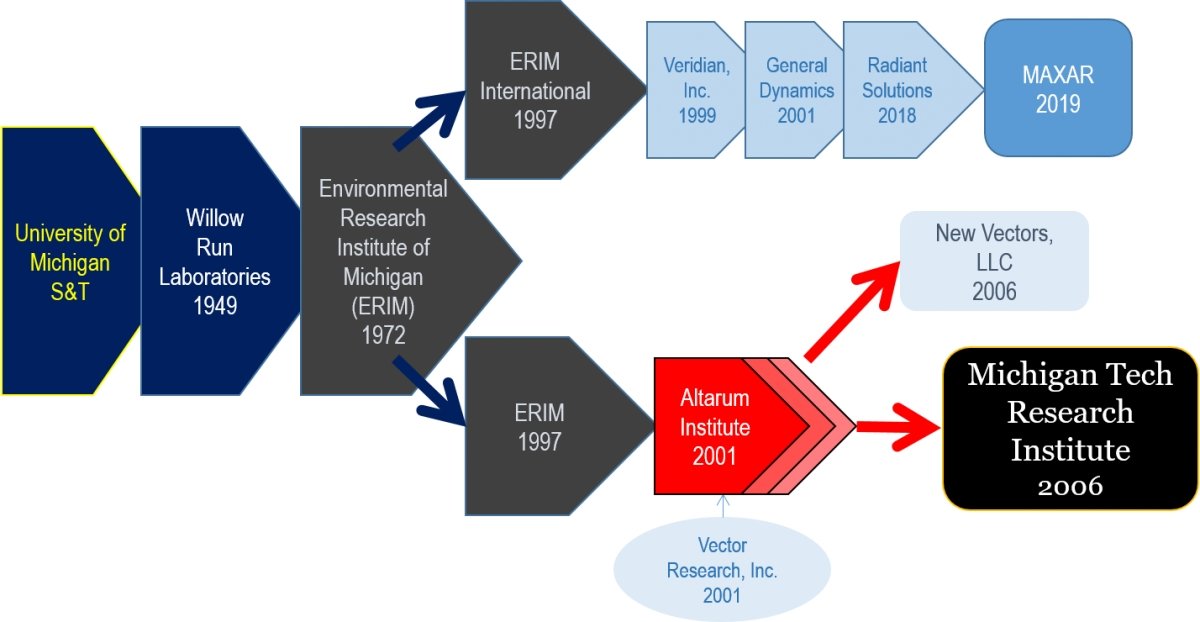