Automotive pioneer Henry Ford made a mark in the Upper Peninsula in the early 20th century. An auto plant, one of the nation's first charcoal factories, commercial forests, sawmills, and even rumors of an experimental chicken farm were scattered throughout the UP.

In several of these locations, Ford established what were known as company towns—communities where essentially all stores, businesses, and housing were owned by one company.

Today, most of Ford's presence in the UP is a memory. In Dickinson County the shells of manufacturing facilities stand eerily vacant. On the shores of Keweenaw Bay, Ford's "Tasty Little Town," Pequaming, is a ghost town, the schoolhouse and storefronts standing empty.

However, one of Ford's company towns remains not only viable today, its ties to the future are stronger than its links to the past.

Located 40 miles south of Houghton in the Baraga County community of Alberta, Michigan Technological University's Ford Center sits on 5,500 acres of forestland and consists of a conference center and a research forest. The Center also comprises the historic Ford company town of Alberta and a sawmill museum.

And though he named it after a little girl, the community belonged entirely to Henry Ford.

In Henry Ford, Life and Logging, industrial archaeologist Brian Cleven credits Ford as the sole reason for Alberta's existence. Ford dammed Plumbago Creek, creating the 20-acre lake that is still in existence across US-41 from the Center. It provided plenty of water for the sawmill's boilers. And while Alberta's lumber production paled in comparison to Ford's three other UP mills, it had a capacity of 14,000 board-feet-per-day of hardwood and more than 20,000 board-feet-per-day of softwood.

When the auto industry's need for lumber waned in the 1940s, most of Ford's UP facilities became ghost towns, industrial remnants of a more prosperous time—but not Alberta.

In a 1999 edition of Michigan History Magazine, Cleven writes, "In 1951 the Ford Motor Company sold the Iron Mountain Operation, extending Alberta's life a short time. The L'Anse and Alberta mills operated until June 30, 1954."

One could argue that 1954 marked not the end, but a rebirth of the former company town, as Michigan Tech entered the picture. On November 30, 1954, Alberta, its well-equipped sawmill, and over 1,700 acres of adjacent timberland were donated to the Michigan College of Mining and Technology for researching the methods of timber management and utilization, and serving as a laboratory to train students in the field of forestry.

While Alberta never developed into the thriving community Ford had envisioned—people drove to other nearby communities for church, commerce, and other activities—it was certainly no ghost town. People still lived in the clapboard houses and every one of the original buildings remained intact.

And while Michigan Tech was still primarily known as a mining and engineering school, the sawmill site was a perfect fit for the University's growing forestry department. 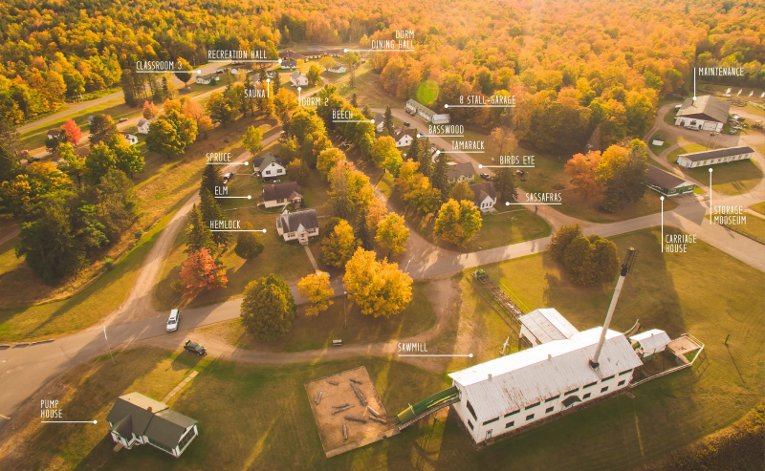 Today, Alberta functions in three distinct and significant ways. Because the facility has been used and preserved over the decades, the historic village of Alberta is a living museum. The sawmill and all of the residential structures are standing and while the sawmill no longer produces lumber, virtually all of the residences are often occupied.

Alberta also serves as a first-rate conference facility. The Center has lodging available for up to 110 people. Lodging quarters include dormitory rooms, a converted schoolhouse, and four of Alberta's original homes. Each option features shared bathroom facilities and most of the rooms are double occupancy.

In addition to the complete meal service in the large dining room, staff accommodate special events such as banquets, barbecues, steak fries and other cookouts, theme parties, and box lunches for outings.

Whitney Boroski, health and wellness coordinator at Michigan Tech, has coordinated LeaderShape® for the past several years. She says Alberta is "the perfect venue for that group," even in winter.

"From the fabulous meals, great meeting space, awesome nature and adventure trails, sauna, museum, and computer lab, the Ford Center lets you get away from it all without sacrificing modern comforts or technology," she says.

Boroski says the staff is willing to please and always goes above and beyond what is requested of them. "The staff is passionate about your experience," she says.

Back to its Roots

Both undergraduate and graduate students from Tech's School of Forest Resources and Environmental Science spend considerable time conducting research in the Center's hardwood forests, wetlands, and plains. The grounds also contain much more than trees. The property is home to numerous species including moose, bears, and wolves.

In addition to the ongoing research at the Ford Center, the facilities also host visiting researchers.

In the early 20th century, Henry Ford had a dream: communities centered on a single enterprise. Whether for automotive production, agriculture, or logging, Ford envisioned thriving communities throughout the UP.

Maybe Ford was too idealistic or maybe he underestimated peoples' ability and desire to travel for commerce and recreation. By mid-century, all of Ford's "company towns" were ghost towns.

And thanks to Michigan Tech, Alberta keeps Ford's idea burning brighter today than ever before. 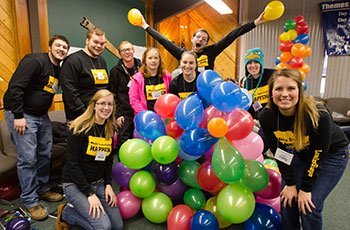 The LeaderShape® Institute is an intensive week-long leadership development experience that is designed to help young leaders learn to “lead with integrity”.  This highly interactive and energizing program provides the tools for individuals to: